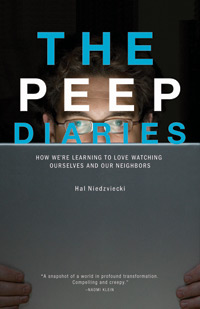 Long before the United States became a culture where millions of people obsessively update their Facebook pages—where cell-phone photographers pinch-hit as network-news reporters, and aggressively fertile families become wealthy stars of reality TV—we lived in a world of Peep.

As social critic Hal Niedzviecki explains it inThe Peep Diaries: How We're Learning to Love Watching Ourselves and Our Neighbors, Peep is the innate human desire to know and be known, to see and be seen, to communicate and be communicated with. We are social animals, goes the Niedzviecki Hypothesis, and this primitive compulsion to reach out and touch (or view) someone harks back to our days as mutually grooming primates.

Not that there's anything wrong with Peep. It's just that today, as technology pushes the limits of Peep to a place where we can confess or reveal anything to the world, we may wish to consider what such digital exhibitionism has forced us to give up: our good old-fashioned right to privacy, for starters.

To drive home this point, Niedzviecki quotes Sun Microsystems Chairman and Co-founder Scott McNealy: "You already have zero privacy—get over it." The year of McNealy's Orwellian verdict? 1999.

Taking us on a guided tour of over-the-counter spy gear, chat rooms, personal blogs, surveillance technology, and even the bizarre world of online amateur porn,The Peep Diaries provides a lighthearted overview of oversharing. Niedzviecki slips a GPS tracking device into his wife's car. He hires private-detective websites to investigate his father. He throws a party in the real world for 730 friends he made in the virtual one; a single invitee shows up and departs soon thereafter, leaving the author to drink—and think—alone.

Behind the high-tech voyeurism and hyperkinetic social networking that Niedzviecki surveys lie the book's central—and vexing—questions: Can this pixellated posing and posturing really enrich our lives? How, if at all, does it deepen our experience? And who, exactly, sees it? As the world of Peep grows exponentially with each passing day, Niedzviecki concludes, finding answers to these questions becomes ever more vital.

"In the age of Peep we don’t fear Big Brother," Niedzviecki writes, "we clamor to be subjected to Big Brother, we, in fact, want to be Big Brother. We want to have his infinite all-seeing and, more importantly, all-broadcasting gaze transmit our every whine, gaffe, complaint, and ill-considered pronouncement…. We want to be on the screen, and why wouldn't we? Fame, fun, and reward beckon."

One disturbing aspect ofThe Peep Diaries is not so much discovering Peep Culture as acknowledging our own roles within it. By which I mean my own role: What am I doing with a Twitter account telling the world that I despise anchovies? Does my MySpace page really need to dissect my family dynamics for the edification of readers in Turkmenistan? Though I draw the line at watching next-door-neighbor types strip online for profit—though I've never had a video camera installed in my back alley or atop my head—millions of others break those barriers every day.

Peepenstein, once created, won't be content to sit quietly in its room. Or, as the author observes, "But a void is a vacuum… it's never full… never satisfied. Peep is bad when it exists to feed the all-knowing void…. Peep is good when it feeds that which is uniquely human: our capacity to care without needing to know why."

Janet Kinosian, a Los Angeles-based journalist, writes for The Los Angeles Times, Reader's Digest,and other publications. She previously reviewed The Book of Calamities: Five Questions about Suffering and its Meaning on AARP The Magazine Online.