Q: 2030: The Real Story of What Happens to America is deadly serious.

A: I try to pepper everything I do with humor, but the future doesn't look so funny to me. (Laughs.)

Q: That explains a plot in which youthful "resentment gangs" shoot up busloads of "olds," hijack a retirement ship, and bomb AARP HQ. 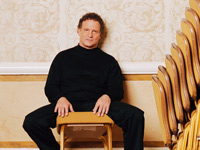 At 63, Albert Brooks has penned a novel about America's future.

A: Being part of a large group of people historically accused of taking, I can see how newer generations would be resentful. How would you feel if you were 30 and saw 8,000 people a day entering into Social Security? You'd say, "Get the f*** off the planet!"

A: Well, let's just say I'm sensitive to these things — hey, that's my job! I can tell when I go into a supermarket and someone hates me.

Q: In the novel Matthew Bernstein, our 47th president, fears his legacy will be "the first divorced half-Jew president who sold America's biggest city to China." Is it a leap to think you might play him in the movie version of 2030?

A: For the kind of movies I make, the budgets I get are low. There's no way I could tell this story [on film]. I couldn't cut to China, cut to America, film a 9.1 earthquake that levels L.A. To make this movie correctly would cost $150 million.

Q: So a book's easier to write than a screenplay?

A: Writing 2030 was the most liberating creative experience I've ever had. As the characters developed, some of the things I originally thought they might do just didn't pan out. That's the coolest thing in the world; it's at the heart of creation. It's like you're honing these chess pieces, and then they start to move on their own.