AARP Rewards is here to make your next steps easy, rewarding and fun! Visit today.

En español | What You See in the Dark, Chicano writer Manuel Muñoz’s first novel after two short story collections, is a performance in literary night vision set in his hometown of Bakersfield, California, in the late 1950s and early 1960s. Drawing on tremendous empathy and an exacting eye for detail, Muñoz conjures up a vanished era in which the people nevertheless feel indelibly real. Through a small cast of characters, he gives the reader an intimate look into dark places both literal and metaphorical: the anticipatory dimness in a movie theater, the well of regret inside a devastated older woman, a late-night murder in a shadowy stairwell. 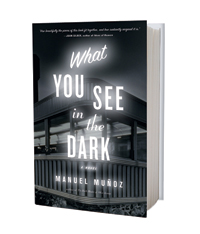 The victim of the mysterious murder in the stairwell is Teresa, a young Mexican American who lives a lonely existence until she takes up with the local hunk, Dan Watson. Going back before her death and moving forward, the narrative plumbs Teresa’s and other people’s lives in the town, excavating their desires and disappointments. One of the characters the reader ends up spending time with is, curiously enough, Hollywood star Janet Leigh, referred to only as “the Actress.” Accompanied by Alfred Hitchcock and a driver, Leigh passes briefly through Bakersfield for a day shoot during the making of the iconic scare flick Psycho. Leigh’s brief encounter with Dan Watson’s aging mother, Arlene, provides the beguiling point at which Teresa and the town’s story obliquely tangles with that of the movie and its famously shocking shower scene.

While the looming presence of Psycho makes for an especially intriguing aspect of the book — Muñoz finds opportunities to contemplate, without tipping into tediousness, such subjects as storytelling, acting, depictions of violence, and American versus European cinema — another of the novel’s chief pleasures is its language. Muñoz’s lean, graceful prose, shot through with quiet bursts of poetry, enlivens every page. Here’s a quick sampling: “the hushed violet of five in the morning,” “an electric necklace of shimmering bulbs,” and “they sounded … silky, like looking at cigarette smoke but not having to smell it.”  As beautifully as he can write, Muñoz never lets style trump story, and he never lets his characters — least of all Arlene, Dan’s long-suffering mother — be reduced to simple phrases.

Abandoned years before by her husband, then later by her grown son (it’s not giving anything away to say that Dan disappears after Teresa’s murder), Arlene feels alienated from her past. "When she looked up from the counter, it was 1968 and she was 56 years old. It was as if she’d never been anybody’s anything." Through Arlene, the reader experiences the erosions of time as Bakersfield changes, trading in the past for the promise of the future — a promise that holds little light for Arlene. But as Muñoz so aptly puts it: “What you do with darkness is pitch yourself into it.”  While Arlene may not have it in her to do so, this is a sentiment all readers will relate to, even without night vision to guide them.

Next: Q&A With Manuel Muñoz >>

Manuel Muñoz is the author of two collections of short stories, Zigzagger and The Faith Healer of Olive Avenue. Now he’s out with his first novel, What You See in the Dark. Muñoz talked to AARP VIVA about the pressures of being a Chicano writer, why he couldn’t get the film Psycho out of his head and the mentor who influenced him.

Q. Unlike your previous story collections, your new novel doesn’t take on overtly Chicano themes. Do ever feel pressure to write about those big issues?

A. The pressures are pretty immense, to be frank. I think what happens is that — I can only speak for myself as a Chicano writer — the label is confronted with its own limitations, meaning we already have a certain milieu or set of themes that we can or are expected to write about. When we talk about identity, my identity can also be as a filmgoer, as a consumer of art. Why can’t that enter the conversation about what constitutes a Chicano artist? That’s sort of the question that I faced for five years while I was working on this book.

Q. Are you excited to see what the reception of the book is like?

A. The excitement really is that I’m going to be able to go out on a book tour and talk about something that isn’t necessarily personal biography. When I was out doing readings for the short story collection, most questions from the audience tended to be about the Central Valley: what it’s like to grow up there, how do the stories reflect that experience. This time around, this dependence on Psycho is going to generate questions that I just wouldn’t have otherwise been asked. I like that. One of the first things that I’ll be doing once the book launches in March is we’re going to be screening Psycho at the historic Tower Theatre in Fresno, California.

Q. How did you arrive at giving Psycho a central role?

A. When I was an undergraduate at Harvard, I took a class on Hitchcock, and we were required to view all of his films on the big screen. I’d seen Psycho before, but when I saw it on the big screen I was really struck by this moment where Janet Leigh is driving away from Phoenix and she passes this sign for Gorman, California. Gorman is this little mountain town on the pass between Los Angeles and Bakersfield. So even though the film never explicitly said that the Bates Motel was going to be in the Central Valley, logic dictated that was exactly where it was going to be. That moment stayed in my head for a long time as a moment where I felt that the world of art could penetrate a place like the Valley.

Q. Can you tell us more about the role of your home region of California’s Central Valley in your work, and Bakersfield, where the novel is set?

A. I’ve always said that the Valley is a place of walls. You’re surrounded on three sides by mountains, and it almost literally is telling you, "You can’t escape." Most people that I grew up with always had dreams of moving to some other place. It’s a place that is dominated by small towns. Bakersfield has always functioned as the gateway on the drive to Los Angeles. It has become a place for me that has started functioning as metaphor for the interior lives of a lot of people I write about.

Q. Who are the writers who have been most important to you?

A. I speak often about my mentor at Cornell, Helena Maria Viramontes. I met her over 15 years ago. As a mentor-student relationship, it has served me extremely well. She really sort of coaxed me out of a lot of shyness and uncertainty about art. She still is a great influence on me.

Q. Now that you teach writing at the University of Arizona, do you like being in the position to mentor?

A. I do because it was so valuable to me. Most students are at a point where it’s not a lack of talent or ideas getting in the way. It’s a lack of confidence. To be able to hear from a peer — I approach my students as a peer, not as a professor — I think it can be very valuable for some people.

A. That’s a good question. Another novel is in the works.

Next: What You See in the Dark (Book Review) >>