At an age when most children are starting to read and write, Jessica Theroux was learning how to cook. She felt an inexplicable but undeniable drive, even as a 7-year-old, to bring family together around the table. Saturday mornings she could be found at the stove, mixing custom combinations of fresh fruit and chocolate chips into pancake batter for her parents and sister. 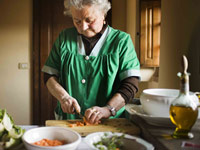 But at the ripe old age of 9, Theroux became sick with digestive problems and was prescribed a regimen of medications to manage them. By age 10, she was spending even more time in the kitchen, baking chickens and topping potatoes with cottage cheese according to a strict program laid out by a nutritionist in conjunction with an array of medicinal herbs. As an 11-year-old, she weaned herself off her medications entirely — and learned how to make healthy, fresh foods taste delicious.

Fast-forward to college, when Theroux took a year off from studying filmmaking and photography to train as a healing-foods chef. After graduation in 2003, she set off for Italy's Lombardy region and the kitchen of Mamma Maria, the mother of her childhood au pair. Following word of mouth and her taste buds, she traveled and cooked through the Italian countryside for a year and a half, ultimately working alongside 12 matriarchs in their own kitchens — and around their outdoor hearths, under their olive trees, and in their gardens.

Q. Why did you choose Italy for your project?

A. I needed to learn about food traditions and pleasure around the table. Italy seems to do that best.

Q. And why grandmothers?

A. The grandmothers are the people who are cooking for their families. The next generation down is out working, and the grandmothers are taking care of the children. They are, quite literally, the bearers of traditions and the producers of the meals. They're the heart and soul of the culture.

Q. How did their life experiences affect their cooking?

A. They had lived through war, some through both World Wars I and II, so food was really precious to them, and hardiness and self-reliance was incredibly important. It's what had allowed them to eat during wartime. There was a sense of pride in knowing how to cook well from very little, like how Grandmother Carluccia, who lives in Calabria in southern Italy, could make great pasta from flour and water, not even needing eggs or oil.

A. It's so good. It's also easy. It's amazing what you can do when you have to. A lot of these dishes developed out of necessity.

Q. Did the women you met in Italy use food for medicinal purposes, also?

A. Very much so. It was really woven into the culture in a subtle way. For example, Carluccia would go foraging for wild greens. They're bitter and wild, and she loved doing it. But she also had a sense, and said outright, that they help cleanse the liver, which she knew was important to do in the late winter and early spring. She liked eating the greens more as she got older.

Q. Did they share any particular medical secrets that could be applied here?

A. Armida's chicken broth. [She lives in Lunigiana in northern Tuscany.] She would occasionally kill one of her prized chickens, boil it, pick its meat and then put the bird back in the broth. The collagen and the cartilage and all of those substances that are released during boiling are really good for the joints and seem to help arthritis. Certainly you'd want to use a free-range, organic chicken if possible.

Q. And the bitter greens!

A. We could all do with more dark, leafy greens, and in particular bitter ones like dandelion greens.

Q. The women in your book had these incredible ingredients they grew in their own backyards or purchased within their communities. Is it possible to replicate that quality of ingredients here?

A. Most towns have some kind of a health-food store relatively nearby, so that's a good option. Farmers' markets are great. CSAs [community supported agriculture] are wonderful. I'd encourage people to reach out into their communities and to really get to know who's producing their food.

Q. Is knowing who's producing your food important in Italy?

A. It's just the way it's done, and it creates an overall sense of community around food. I was really struck by Raffaela's story. She was a bread maker in Calabria. Traditionally, all of the women in her town used the same flour and starter that they would pass around between them. They had a community wood-fired hearth, and they would each take turns baking the bread, and everyone would get bread for their family, and no one woman had to do too much of it.

Q. That sounds like a fairy tale. Does it still happen?

A. Raffaela's husband died, and she was totally unsure of how to support herself and all of her children. But she remembered the bread and knew that there were still women baking the bread, but not on such a large community scale. She got a knob of this old sourdough starter from a woman in the community and refurbished the wood-fired oven. Now she's the town baker. The whole community comes — I mean from miles and miles away — to get bread from her a couple times a week.

Q. Cooking aside, is mealtime also different in rural Italy?

A. The women I was with all have lunch at 1 and eat dinner at 8. That's part of the culture. The family traditionally reconvenes in the kitchen for lunch, and then takes a nap, and then goes back to work around 3. That's a big difference; everyone always comes together at least twice a day.

Q. How did you get each recipe in the book?

A. It was complicated. These women didn't have recipes, really. There was "a bit of this" and "a bit of that." I had filmed all of the women, so in writing the book I went through the films to see what they were doing and turned their rough ideas of measurements into concrete measurements and then tested, and tested, until I was getting the taste that they had produced.

Q. Did the Italian grandmothers inform parts of your life other than your cooking?

A. Definitely. Usha's approach to health has been invaluable whenever anything happens in my body that I'm trying to figure out. I make my bed the way that Mamma Maria does. I've become very, very particular about how my bed should be made and how the pillows should be fluffed.

A. But it's also just important for me to feed my friends and my family. I try to emulate the attitude that both Irene and Armida had: "You make food, you see who shows up, you nourish them really well, and you listen really closely because you don't know what they have to offer." And it could change your life.

Q. You describe baking with Usha, who lives in Le Marche, and it almost sounds like she uses emotions in her cooking as if they were ingredients.

A. If a grandmother was in a bad mood, she would burn whatever she was making. Or it just didn't taste as good. But if she was joyful and loving while she was cooking, it just elevated it in a way that's kind of hard to describe.

Q. Is there a connection between the cook's emotions and health, too?

A. Definitely. It's not scientifically proven, but it's something that I really encourage people to play around with, to see if they notice it. When people approach cooking with an attitude of love and respect and care and a desire to really nourish the people that they're feeding, their love makes it so much more delicious. You can be a very inexperienced cook and make fabulous food just by doing that.