Thomas Frank put himself on the polemical map in 2004 when he published What’s the Matter with Kansas?, a heartfelt dissection of his home state and the rest of “red” (conservative) America. Why, asked Frank in that book, had so many regular Joes abandoned the Democratic Party for Republicanism, long regarded as the party of lawyers and bankers?

Social issues, he concluded, had trumped the financial woes of working stiffs. But Democrats made a big mistake, Frank wrote, when they began to worship at the altar of the free market, leaving little to distinguish themselves from conservatives (in the eyes of heartland voters) other than their love of lattes and tough-to-stomach positions on abortion, gay marriage and the teaching of evolution in schools.

Not everyone signed off on Frank’s thesis. Princeton political scientist Larry M. Bartels, for one, wrote a lengthy takedown (“What’s the Matter with What’s the Matter with Kansas?”) in which he pooh-poohed Frank’s definition of “working class.” For many, however, it appeared that Frank had boldly drawn back the curtain on the political machine.

That was two elections ago, and today the free-market chickens have seemingly come home to roost: Wall Street played fast and loose with everybody’s money, regulators kept hitting the “snooze” button and we’re all in a fine mess. Yet not only has the religion of the free market survived, marvels Frank (the man possesses bottomless wells of astonishment), it has whipped Americans into an even greater capitalistic fervor. What’s going on?

It’s a good question — and an important one. And Frank, with his Middle America roots and his talent for plucking anecdotes from history that shed light on the present, could have been just the man to answer it. In his new book, Pity the Billionaire: The Hard-Times Swindle and the Unlikely Comeback of the Right, he looks to the Great Depression and the protests it spawned — farm strikes in Iowa, World War I vets occupying tent cities in Washington — for a model of how society “should” rise up to meet economic calamity.

Next: How Frank missed the mark. >> 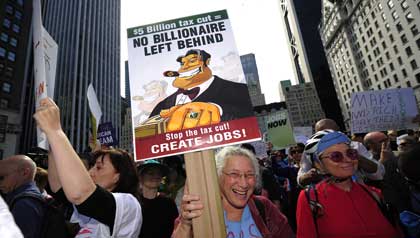 Frank moved from Chicago to the Washington, D.C., area shortly after finishing What’s the Matter?, whereupon he appears to have contracted Beltway Mentality Syndrome. He monitors articles in newsmagazines to take the nation’s political temperature.

He obsessively parses the blowhardism of talk-show host Glenn Beck. (Presumably, Frank wrote much of Pity the Billionaire before Beck left his influential Fox News perch last year.) And he quotes from signs he spotted at various Tea Party rallies he attended. (Although, in his defense, two of those were in Denver and Richmond.)

Yet not once, to judge from these pages, did Frank interview anyone holding those signs. Pity the Billionaire abounds with witticisms about what politicians and Frank’s fellow pundits and journalists are saying, but the opinions and values of average folks are absent. So far does he go to avoid human contact that he risks becoming the Wizard of Id of opinionators.

This omission eclipses Frank’s incisive critique: Confronting the collapse of the free market, the American Right has persuaded vast numbers of people that the market wasn’t allowed to be free enough. That idealized view of reality, says Frank, has galvanized people in a dark time and spurred a resurgence of the political right “as extraordinary as it would be if the public had demanded dozens of new nuclear plants in the days after the Three Mile Island disaster.”

In many ways, events of last fall have conspired to make the timing of Pity the Billionaire unfortunate: Frank seems to have completed most of his manuscript before the Occupy Wall Street protest and its progeny around the country broke upon the national consciousness. Fueling that movement, finally, is the outrage that Frank’s familiarity with history had led him to expect. As this newest episode in the saga unfolds, Frank himself may have to take to the streets to piece it together.

Sarah L. Courteau is literary editor of The Wilson Quarterly.