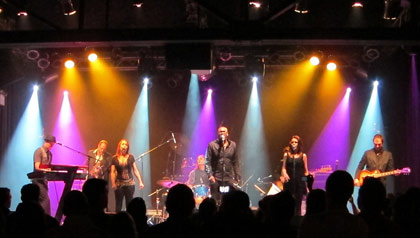 How do you solve a problem like bringing the world's most popular piece of musical theater into the 21st century? Well, you might consider transforming it into a high-energy happy meal of heavy metal, hip-hop, soul, bebop and bluegrass.

Which is exactly what the Brooklyn Rundfunk Orkestrata has done to The Sound of Music on The Hills Are Alive. And while the group's debut album, and forthcoming fall tour, may shock longtime fans of both the Broadway musical and 1965 film hit, The Hills Are Alive arrives with the blessings of composers Rodgers and Hammerstein's business organization.

If you've ever wondered what "Do Re Mi" might sound like if it were mashed up with the Jackson Five's "ABC," or imagined "My Favorite Things" with screaming guitars, you've come to the right place. And while the styles may have changed — often quite radically — the songs remain melodically, even beautifully, the same.

Hills came alive in late 2009, when Rundfunk leader Peter Kiesewalter needed to assemble a holiday show for a Manhattan club. Instead of playing Christmas and Hanukkah songs, Kiesewalter's thoughts turned to an annual TV event. "Why don't we do all the songs from The Sound of Music?" he thought. "It's a movie I've always associated with the holidays."

Raised in Ottawa, Kiesewalter is more than a little obsessed with the musical. His basement studio in Brooklyn, where most of The Hills Are Alive was recorded, is festooned with posters and album covers relating to the work. He has also accumulated more than a hundred copies of the movie's soundtrack at thrift stores while touring with various groups.

Within hours of the gig's announcement, however, Kiesewalter received a cease-and-desist notice from Rodgers and Hammerstein's legal team. The organization is highly protective of its intellectual property, but it came aboard once Kiesewalter played them a couple of demos. "They were wary," he recalls, "but we got together and they said, 'Your timing is great. Do whatever you want and you'll have our blessing and approval.'"

Michael Jackson's people, on the other hand, weren't quite so forgiving. The second track on The Hills Are Alive is a why-didn't-anyone-think-of-this-before mash-up of "Do Re Mi" with the Jackson Five's "ABC." As the album neared its production deadline, the Jacksons' music publishers at first refused to consider a 50-50 publishing split with Rodgers and Hammerstein's estate for use of the song but gave in at the last minute.

"I think I developed an ulcer over it," Kiesewalter admits.

The CD's other memorable mash-up is "Edelweiss." Kiesewalter brought the alpine floral tribute back to America by blending folksinger Ola Belle Reed's signature tune, "High on a Mountain Top," into it. Rodgers and Hammerstein, Kiesewalter says, "succeeded in fooling people into thinking 'Edelweiss' was a traditional Austrian folk song plucked out of obscurity."

But for Kiesewalter, the story of the von Trapp family's flight from Austria to America is a classic immigrants' story "of a family fleeing an oppressive situation and coming to the USA in search of a better life."

You might have trouble disassociating "Climb Every Mountain" from Mother Superior's iconic silhouette and operatic contralto. Kiesewalter, however, believes the song's lyrics express thoughts about positivity and higher aspiration that wouldn't be out of place on the latest album by R&B star Mary K. Blige, a connection made even clearer by guest rapper TK Wonder.

"My favorite songs are the ones I took the most liberties with," says the musician. The record's shortest track, "I Have Confidence," became a frenzy of punk-rock vocals, gnarly guitar and bebop saxophone. "Sixteen Going on Seventeen" takes an exceedingly kooky turn as a klezmer tune featuring a rabbinical adviser.

"Making this album was an insane amount of fun," Kiesewalter says of the 15 months the quartet and their guest vocalists spent recording it, "and I hope it sounds like it."

He's already received plenty of both kudos and virtual tomatoes on the musical's Facebook page.

"What I didn't want to do was make fun of The Sound of Music, because that's too easy. If I'm going to play music, it's because I sincerely love it."