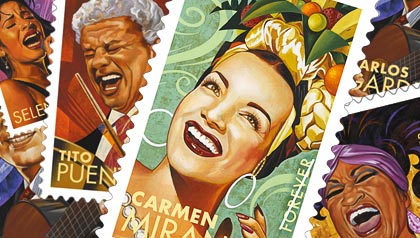 En español | In the final months of Barack Obama's presidential candidacy, Rafael López's wife, Candice, asked him for a big favor: Create an image that would resonate for Latinos and help Obama win their votes in swing states. "We can't let him lose," she implored.

The portrait Lopez painted of Obama was adopted as an official campaign poster and gave the artist national exposure that led to speaking engagements, the creation of three paintings for Oprah Winfrey's South Africa school, and a coveted invitation to produce the 2011 Latin Music Legends U.S. postage stamp series being released in March.

López's "use of brilliant colors to capture the flavor of the Hispanic experience made him a natural choice for the Latin Music Legends stamps to portray their energy and vitality," says Richard Maher, a U.S. Postal Service spokesperson. The series features Celia Cruz, Carlos Gardel, Carmen Miranda, Tito Puente and Selena.

The artist, 49, previously designed two stamps for the Postal Service: one illustrating the merengue and another commemorating Westminster vs. Mendez, the 1947 court case that held separate schools for Mexican Americans were unconstitutional. But creating an entire set of stamps, says López, was a greater challenge and involved two years of research and painting.

As usual, he split his time between a home and studio in San Diego — a spacious converted auto garage in a patch of gritty downtown — and a more idyllic spot in San Miguel de Allende, a central Mexico artists' colony. Also as usual, he used Mexican acrylic paints because of their low price and vibrant colors. He applied the paint to hand-cut, sanded wood canvases, creating textures with various tools, including shells. A printer then reduced the paintings to produce stamp-size copies.

Miguel Salmerón, a photographer who has worked with López, says the artist's commitment to Mexican forms and colors "has really hit a home run. He was doing this when it wasn't cool. He could have gone in any direction. I'm glad he stuck with his love for his culture and the belief in his own work."

Says López, "It was a real honor to make the series because I am passionate about Latin music, as it has fueled my work for decades. I hope the images will inspire fans and future generations of musicians and artists."

Next: Artist and Student Mentor >>

The students identify with him, says MaeLin Levine, who owns the graphic design firm Visual Asylum and has worked with López on community and commercial projects. "The AIGA LINK and folks like Rafael have positively influenced many kids and saved some from getting involved in drugs and gangs," she says.

Charles Glaubitz, 37, a former student of López's who now creates commercial art installations in Europe, says the artist "has a true voice that helps to inspire young artists to pursue their dreams."

Beyond mentoring and creating stamps, López has illustrated several award-winning children's books and spends time painting murals — often as a community service. He and Candice, a college art professor, conceived San Diego's Urban Art Trail project. For this massive community beautification effort, López developed a bold, graphic style of murals that allowed the public to fill in the empty spaces as if using an enormous paint-by-numbers kit.

Levine says that through the Urban Art Trail, Candice and Rafael López have become the "graphic voice throughout East Village in San Diego," creating a community-wide project that includes paintings on utility boxes and buildings. Rafael's project paintings have become signature pieces, and his Urban Art Trail concept has been copied in neighborhoods throughout San Diego, Levine says.

The Latin Music Legends stamp project will have an even broader reach. The prominence of the five musicians appearing on the stamps, López says, has given him the opportunity to teach Americans more about them and imprint their faces forever in our memory.

"The Latin Music Legends stamps honor incomparable musicians and performers of the Latin sound whose contributions continue to impact the public," he says. "I wanted people to see the stamp images and hear their music."