You can call Edward "Ned" Barnard and Ken Chaya explorers, naturalists or detectives. That's because their 2 1/2-year journey of discovery in New York's Central Park has led them to catalog pretty much every major tree in the 843-acre expanse. 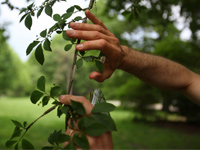 Detail of a Euonymous or Burning Bush.

"I was walking my dog there and realized I didn't know how to distinguish a black oak from a red oak," says Barnard, 75, a retired book editor who now lives in Philadelphia. So he decided to do some research, which he put into his 2002 book New York City Trees. The illustrated work, which has sold over 20,000 copies, describes native trees and exotics in elaborate detail, and offers a guide to where in the city each is likely to be found.

Now Barnard and Chaya have joined forces to produce the detailed, full-color "Central Park Entire: The Definitive Illustrated Folding Map," a comprehensive guide not only to trees, but also to trails, architecture, shoreline, rock formations, swamps and more. The map gives new meaning to "leaving no stone unturned."

"My real love is nature and being outdoors," says Chaya, 55, a longtime Central Park birder and artist. After Barnard told him about plans to write a book, Chaya became interested in trees. "He began to teach me about leaf shapes, buds, flowers, looking on the ground at the enormous evidence of fruits, nuts, acorns, buds — well, one walk together and that was it," says Chaya, who agreed to design a map for Barnard's book. Barnard in turn assisted in Chaya's "Central Park Entire" map project.

Chaya calls Barnard a "walking field guide" and claims that strolling down the Mall — the wide promenade that runs through the park — is like walking down the aisle of a great cathedral.

Standing under a cornelian cherry tree, Barnard reaches up for an unripe berry and pops it into his mouth. He claims it's tasty, although people don't generally eat it here. "Here I compete with birds for this fruit," he says, and explains there are other fruit trees in the park, such as mulberry and black cherry.

"I found a peach tree near the skating rink, and it's the only one in the park," Chaya says. "That was news."

"There are apple trees, too," Barnard adds, "but it's funny, people don't want to eat them. I always pick one and shine it up on my pants and then people get interested and they start eating them. They're really quite good."

Did they find anything unexpected?

Next: Diversity in the park. >>

Chaya was surprised to notice an unusual tree with a bright pink fruit. "We were both amazed by this. I'd never seen a tree with fruit this color, and we discovered it was a rare European spindle tree. Later we found more in the park."

Another surprise was coming across a balsam fir. "I asked the [Central Park] Conservancy and was told there were none in the park, but they were wrong; it was in fact a balsam fir," Barnard says. He speculates that it had originally been in someone's apartment in a planter, possibly 50 or more years ago, perhaps as a Christmas tree. Someone probably took it into the park and planted it.

Diversity in the park

Standing under an umbrella of branches and leaves, both men explain that an international diversity of species parallels the diversity of the city's population. "It's loaded with foreigners," Barnard says. When it comes to trees, there are Norway maples, English oaks, American elms, even Lebanon Cedar trees, often mentioned in the Bible. "It formed the roof of Solomon's Temple," Barnard points out.

Chaya says there are so many old healthy trees because of the care provided by the Central Park Conservancy. There are sometimes 200 people on the grounds, including volunteers, many of whom are older adults, who help with weeding and raking. And there's always change. "From the end of December until May this year, there were changes resulting in 300 more trees."

Barnard adds that "150 years ago, the place was described as a series of pestilential holes, ponds that were filled with garbage, and it stank to high hell. Now there's a conglomeration of trees, natives and exotics you won't find anywhere else." In fact, there are 174 species and, at last count, more than 19,000 trees in the park, he says.

In his book, Barnard quotes Henry David Thoreau: "Nature will bear the closest inspection. She invites us to lay our eye level with her smallest leaf, and take an insect view of its plain." Clearly, Barnard's and Chaya's work is evidence of doing just that.

Central Park tree mappers Ned Barnard and Ken Chaya encourage people to learn about woodscapes in their own communities. "If you learn to identify species, you'll spread that interest to others," Chaya advises. Implicit is the notion that planting trees promotes local involvement and improves life for everyone. "Where trees are found, real estate values increase," Barnard says. "They help clean the air, giving us carbon dioxide filters and providing oxygen and enormous abundance of therapeutic value. "The trees do something for us psychologically ... You sit in the park and give yourself a chance to be calm, let the buzz clear away from your mind, maybe even do nothing. It's amazingly healing." Chaya adds that Central Park's creators, Frederick Olmsted and Calvert Vaux, were forward thinking in knowing that New York needed a park. "Without it, this city wouldn't be worth living in," he says.