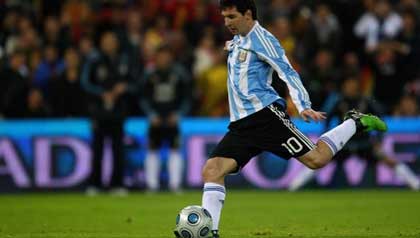 Messi on an offensive drive.

En español | When Argentina survived a stormy stretch to qualify for a place at the 2010 World Cup, team manager and soccer great Diego Maradona made it clear whom he expects to return the Albicelestes to glory.

Dubbed "The Next Maradona" for his pinpoint passes and jaw-dropping goals, Messi is considered the best soccer player in the world today. So why is Argentina struggling?

The 53-year-old DiBernardo, a native of Buenos Aires who immigrated to the United States as a teenager, was a standout player in the 1970s and '80s heyday of the New York Cosmos. On that team, he played alongside legends of the sport such as Franz Beckenbauer and Carlos Alberto. He has also mentored hundreds of youngsters as soccer coach at Waubonsie Valley High School in Aurora for 21 years.

"Argentines have high expectations of their team," says DiBernardo, who also played for the U.S. National Team in 1979-85. "I just haven't seen the team jelling."

Part of the problem is that Messi has been good—though short of spectacular—in his performance for Argentina. (He made his name playing for his club team, FC Barcelona in Spain.)

Like DiBernardo, many pundits in the soccer world believe the fault lies with Maradona. His prowess as a player or his patriotism are unquestionable, but that doesn't make him a great coach. Maradona should stop pressuring his protégé to become The Next Maradona, pundits say, and just let Messi be Messi. Maybe Maradona is putting too much pressure on Messi to lead the Argentine team. Indeed, when Maradona took charge of the squad, he gave the number 10 jersey—the iconic number he wore as a player—to Messi. After Argentina qualified for the World Cup, Maradona announced that the reserved Messi needed to step up as the "owner of the team" if they were to succeed at next summer's World Cup. Maybe it's all too much for the youngster.

"Messi makes things happen on the field," DiBernardo says. "But he's not a personality like Maradona. Maradona was able to put the team on his shoulders and carry them to victory. Messi is something different."

Maradona, 49, emerged from the shantytowns of Buenos Aires to become one of the greatest soccer players in history. He played in four World Cups, winning in 1986. At that tournament, Maradona scored both the greatest and the most controversial goals in tournament history. The former goal came after a stunning run; the latter, earlier in the same quarter-final game versus England, was an illegal handball that Maradona claimed was scored by "la mano de Dios" (the hand of God).

Even before his playing days ended, Maradona's life started unraveling. He got hooked on drugs, gained weight, and nearly died of a heart attack after a cocaine overdose. He did a rehab stint in Cuba (Fidel Castro is a close friend), got clean and sober several years ago, and started a gig as a television talk-show host. He was named Argentina's national team manager in 2008 despite possessing meager coaching experience.

Just 22, Messi resembles Maradona in both size (he's five feet seven inches; Maradona is five feet five) and talent. Both were teenagers when they debuted for Argentina, quickly rising to superstar status. Messi, however, tends to be more soft-spoken than his outrageous mentor, both on and off the field, and he has so far avoided the tabloid controversy that has dogged Maradona throughout his career.

John Bocwinski of Naples, Florida, is optimistic about Argentina's chances in South Africa. "This is Argentina's year," he says. "Mark my words. This is going to be Messi's World Cup."

Bocwinski, a retired autoworker born and raised in Argentina of Polish immigrant parents, continued to play soccer after moving to Wisconsin as a teenager and eventually represented the U.S. National Team in the 1972 Olympics. He tells the moving story of a time he played a game against Argentina and the opposing coach gave him a blue-and-white-striped Argentina jersey to wear under his U.S. uniform.

"I cried like a baby when they played the national anthems," he says. The anecdote sums up his feelings about soccer: he roots for the United States, but he takes pride in his Argentine heritage and follows the team's fortunes.

Bocwinski, 73, who coached Carthage College in Wisconsin in the 1980s, believes the quality of the players will overcome the manager's shortcomings. The Albicelestes's struggles in qualifying only mean the team will be stronger come the big tournament.

"Argentina is like a wounded animal," he warns. "The world had better watch out."

After attending three World Cups to support Argentina, including the 2006 tournament in Germany, Bocwinski will stay home to watch the games this summer. He plans to invite his brother and son over to watch the games on TV and eat barbecue Argentine-style—"with a good Malbec wine and some homemade chimichurri, of course."