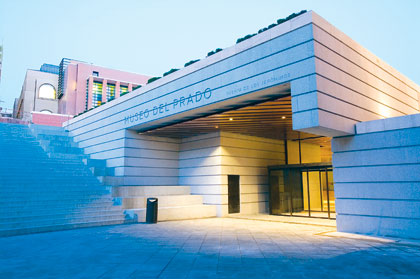 En español | Tony Bechara lives among art. From his New York City studio, which doubles as his home, the acclaimed Latino artist says that while he embraces his culture, it does not define his art. "People are becoming more aware that it's hard to stereotype when it comes to Latino art," says the Puerto Rican painter, whose multicolored-grid abstract works have captivated fans at exhibitions worldwide for decades.

"My preoccupation has been with the optics of color—not because of my essence as a Latino, but as an artist," says the board chair of New York City's Museo del Barrio, the only museum in the city dedicated to Caribbean and Latin American art. Bechara counts the Museo, Spain's Museo Nacional del Prado, and New York's Frick Collection among his favorites.

The largest Latino museum in the U.S.

A collection of larger-than-life subjects by Fernando Botero.

Dedicated to the work of Dalí and to those who share his artistic vision.

Nowhere is Spanish art on greater display than at Madrid's Prado, also one of von Barghahn's favorites. Situated in the heart of the Spanish capital, the structure holds thousands of masterpieces, including some by Diego Velázquez and Francisco José de Goya y Lucientes (known as Goya). A visit to the Prado can be capped off with a trip to another of von Barghahn's favorites: the nearby Museo Thyssen-Bornemisza, whose works include some by Spain's Pablo Picasso and Salvador Dalí.

Cynthia MacMullin, curator at the Museum of Latin American Art (molaa) in Long Beach, California, says she makes pilgrimages to the Frick Collection in Manhattan for inspiration. "The works are so historically pivotal," she says. "I weep when I view the art." The Frick boasts works by Goya, Spanish master El Greco, and others.

Latin American art is distinguished by its focus on social issues, MacMullin says. For example, a piece at the molaa, Cotzij, by Guatemalan artist Verónica Riedel, explores identity by creating a multimedia Baroque-themed collage of a young contemporary girl as a princess. "We utilize the art...to understand cultural concepts different from ours in the United States," MacMullin says.

These links are provided for informational purposes only. AARP does not endorse, and has no control over, or responsibility for, the linked sites or the content, advertisements, materials, products, or services available on or throughout these sites.