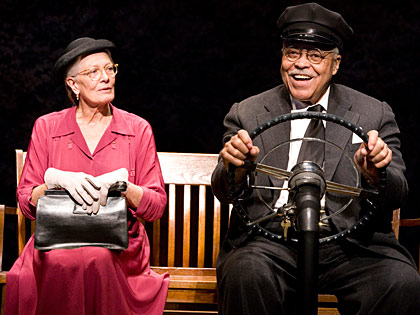 En español  |  James Earl Jones is backstage at the Golden Theater in Times Square finishing a preshow snack of melon. It's just two hours before he takes the stage with Vanessa Redgrave in Broadway's Driving Miss Daisy, and he's talking about some of the challenges of his life, or as he sees them, possibilities.

Among them is that as a child he battled a debilitating stutter. So, it's no surprise that the man with one of the most recognizable voices in the galaxy found this year's Oscar-winning best picture, The King's Speech, strongly resonating.

"The difference between me and the prince of England is that he was a stammerer. I'm a stutterer," says Jones. "A stammerer just gets stuck. That's why they stamp their feet — they're trying to get through that one sound. Stutterers get stuck on repetition."

Jones was so burdened and insecure throughout his adolescence that he was virtually silent for years. He recalls his classmates' mockery. "I was in Sunday school one day. There are not many jokes in the Bible, but I heard kids falling off their chairs with laughter."

His grandparents allowed him to stop going to church, and Jones says that he just "gave up" until a high school teacher used the artistry of words to prod him back to speech.

"I wrote poetry," he says, "and my teacher discovered that I could talk it to myself. He said, 'If you like these words, you should be able to stand up in front of the class and say them. They're your words. Say them to the class. If you don't, I'll suspect you didn't write them.' "

Today, Jones is brusque when it is suggested his voice is special. "I don't know what's incredible about it," he says. But whatever he thinks of it, it did get him the role that made him an icon.

While 6-foot-7 British actor David Prowse was cast as the villain Darth Vader in George Lucas' Star Wars trilogy, Lucas needed a more authoritative presence to give the character his voice.

"When George put the movie together, he found that David had a tenor voice," says Jones. "He thought of using Orson Welles, but thought Orson would be too recognizable. So he picked me thinking [moviegoers] wouldn't recognize me."

"Every act you take in life, you take a journey," Jones says, objecting to use of the word challenge. "Sometimes there's a hill on that journey, and you climb that hill. That hill, you might call a challenge. In life, I've avoided the stages of panic you have when you think, 'Oh, this is going to be a challenge,' by looking at things as possibilities, not challenges."

Jones' perspective is interesting when one considers how he was raised by an African/Native American grandmother who was "more racist than anyone I'd ever met."

"Life had given her a bad hand, and she hated everybody," Jones says. "White people first, then Indians for having black slaves, then black people for allowing it to happen. Nobody was exempt from her fury. She trained us to be racists, and we had to learn different. We had to learn to think for ourselves, which was the best thing she could have done for me."

Jones — who will continue with Driving Miss Daisy through April 9, and who was just announced as the star of the upcoming Broadway play Gore Vidal's The Best Man, in which he'll play a fictional former U.S. president — has come far as both an actor and a person with the philosophy that viewing life's travails through any hurtful prism is counterproductive. Still working hard at 80 with no sign of slowing, Jones has found just the right recipe for squeezing every drop of joy out of life.

"Bitterness doesn't get you very far. It creates a little cancer in you," he says. "That includes all the negative feelings — including the anxiety of challenge."