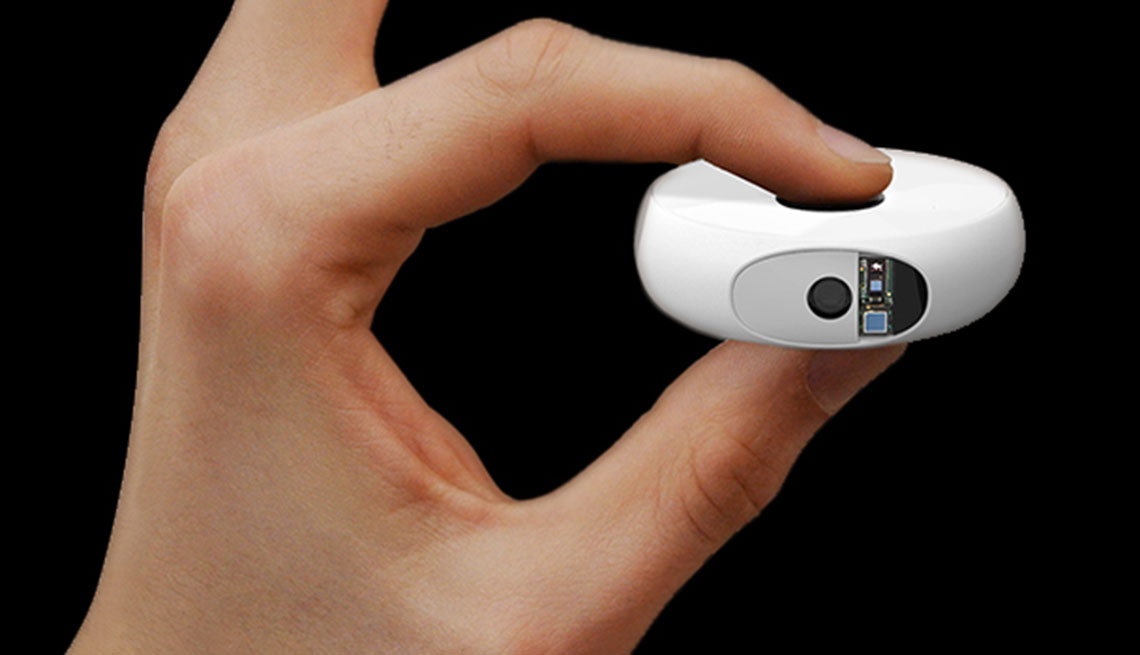 Emergency room tests to your pocket

In 2005, Walter De Brouwer became all too familiar with hospitals when his 5-year-old son suffered severe brain damage as the result of a fall. Most of the time there was nothing he could do but sit by the bed and wait for updates from the doctors. “We were powerless,” he says. “We had no information. We tried to do our best and not complain, or not too loudly.”

It was a miserable experience. But through it, De Brouwer realized the importance of placing health data in consumers’ hands. After a career as a computational linguist applying machine learning to language problems, he launched a Silicon Valley startup to make a small, disk-shaped medical device that, when pressed to a person’s forehead, delivers heart rate, blood pressure and temperature readings to a smartphone in 10 seconds.

The diagnostic gadget, dubbed Scanadu Scout, is now being tested by more than 8,500 users, all backers of De Brouwer’s 2013 Indiegogo crowdfunding campaign, which raised $1.7 million in a month. De Brouwer is seeking approval from the Food and Drug Administration and expects Scout to be available to consumers sometime in 2016 for an estimated $199.

The Scout won’t perform a complete physical or save you from a visit to the doctor — sorry! Scout will be useful to people who, for instance, need to monitor their blood pressure to see how it’s being affected by medication or track their heart rate following a heart attack. Armed with that data, users can see how various factors (exercise, diet, stress, sleep) affect their vital signs, then modify their behavior to achieve better health.

The aim of democratizing health information is to make the conversations between patients and medical practitioners more productive.

The aim of democratizing health information isn’t to take control away from doctors, De Brouwer says; it’s to make the conversations between patients and medical practitioners more productive. As consumers gather more data and provide it to their doctors, they’ll also formulate better questions based on that knowledge and may even become more compliant with doctors’ recommendations if they see statistical results. “We’re going to elevate doctors to be information analysts,” De Brouwer says. “I think they will love it a lot more than what they are doing now.” He recalls observing many unhappy doctors, nurses and administrators during the year he spent as a worried parent in the hospital. His son is now home and doing well. “This is an opportunity for doctors to bring stuff that’s good for the world using our technology,” he says.

And that’s the ultimate goal of Scout: to leverage technology to give people an easy-to-decipher, comprehensive picture of what is going on with their bodies. To that end, each Scout is micro-engraved with the Latin phrase Sapere aude , meaning “Dare to know” — dare to collect your own data and take control of your health. “We don’t want to read the data that other people wrote about us,” De Brouwer says. “We want to write it because as long as there are gatekeepers, people are not really free.”

What is it?
A small handheld device that, when pressed against the forehead, delivers heart rate, blood pressure and temperature readings to your smartphone in 10 seconds. It’s loosely modeled on Star Trek’s tricorder, a fictional, portable, wireless gadget used to scan and record data.

Who's behind it?
Walter De Brouwer, a computational linguist, raised $1.7 million on the crowdfunding site Indiegogo. Since then, his Mountain View, Calif.,–based startup, Scanadu, has secured $49.7 million in additional funding to work on devices that scan and upload diagnostics to a smartphone.

Why is it disruptive?
Scout empowers people to take responsibility for their health by allowing them to track important vitals as easily as they check their email and alter their behavior to get better results.

How to get it?
De Brouwer hopes to ship a $199 consumer version sometime in 2016, pending FDA approval.