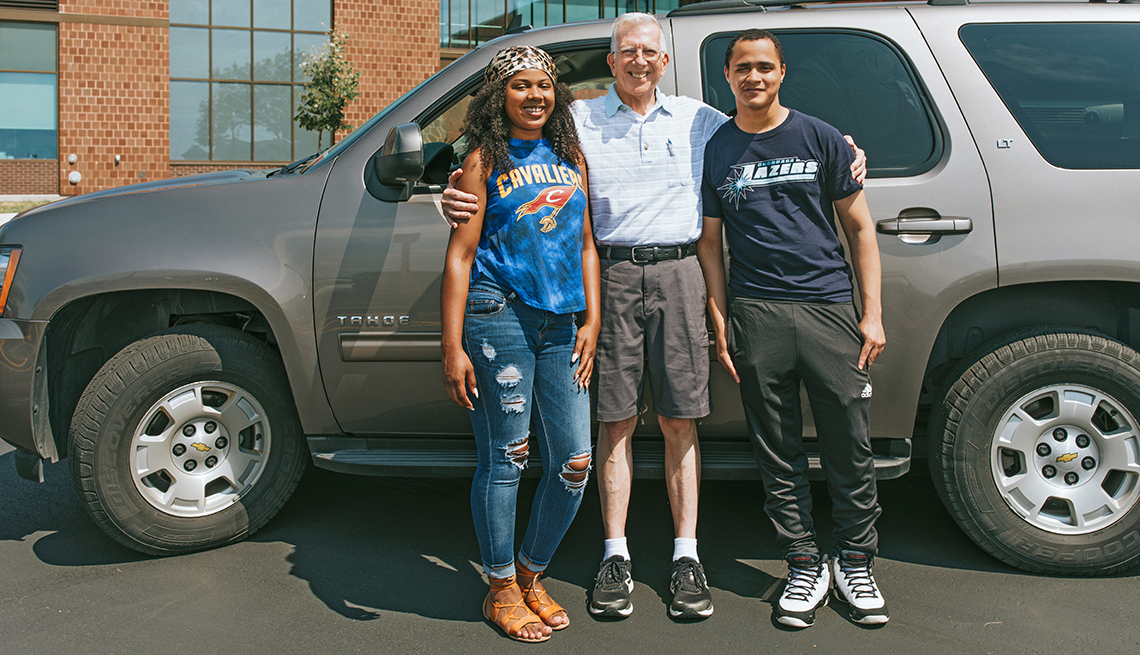 When I left for my freshman year of college in the Northeast, my parents had just moved across the country to Texas. It was hard adjusting to a new school and the long months away from my family. To make matters worse, the logistics of getting home were tricky and often expensive.

Luckily, my father was able to fly up twice a year to help me with the drive so I could spend the holidays and summer breaks at home.

But many college students aren't as fortunate.

"I grew up on a poor dairy farm,” he says. “My dad never finished high school, and he worked a number of menial jobs to supplement our income. By the grace of God, I was able to go to college and fulfill my career desires. I cannot adequately express my gratitude for the opportunity to complete a college education."

He does express it, but not just in words — in miles.

Nine years ago, Goetchius was flipping through the newspaper and read about On Point for College, a nonprofit in Syracuse that helps first-generation and at-risk high school kids and adults get into college. The article mentioned the group was looking for volunteer drivers. His response was immediate: “I'd love to give these kids rides to college and encourage them in their efforts to lift themselves up!"

Since then, he's clocked more than 64,000 miles driving upstate New York students to their new campuses and back home to their families. His passengers include kids with single parents who work nights and others whose families don't have access to transportation. Sometimes it's a quick trip, and sometimes it's a four-hour trek. It doesn't matter to Goetchius: They're on the road to a better education, and he wants to help get them there.

"When I arrive on campus with a kid I just met a few hours before and we've bonded over their story and their potential, it's amazing. It's truly the best feeling,” he says.

It's one he knows well. “We enjoyed college trips with our own three kids,” says his wife, Barbara. “Now Paul is joyfully helping another generation of young folks. He has a lot of parental advice to give On Point students, and those trips allow him to share the lessons he learned in college and at work.”

He even treats them to lunch on the way.

And he doesn't just drop a kid at the dorm and hit the road, either. He makes sure the student is settled in the new living space, even if that means spending extra time on campus. He's helped students figure out registration snafus and key card malfunctions because he knows that moving to a new place is stressful enough.

"Freshmen are scared,” he says. “They don't know what to expect. I like to give them roommate tips and adjustment suggestions to ease their transition.”

He once helped a girl move into her dorm, and when they were done, she looked at him and said, “What do I do now?” Goetchius helped her find her roommate and pick a spot on campus to meet for lunch.

He leaves once kids feel comfortable. On Point, however, remains a steady presence in their lives, making sure they have the support they need to stay in school. Right now, the group helps 3,000 students fill out applications and financial aid forms, then connect with on-campus resources and eventually career coaching after graduation.

"We serve six neighboring counties and partner with two other college-access organizations in New York City,” says Goetchius. “My desire is to see On Point active across all of New York state … then eventually across the entire country."

These days, he and Barbara spend winters in Florida, so he doesn't drive students home for the holidays anymore. But he does shuttle as many as he can over the summer, helping them attend courses that will give them a leg up in the fall. Then he's back again to greet On Point students in the spring.

"When I hear that a kid has asked if Mr. G is available to give them a ride, it makes me proud,” he says.

And the $1,000 he spends on gas a year? That's a price he's willing to pay. “It's just such a privilege to drive them and hear their stories.”