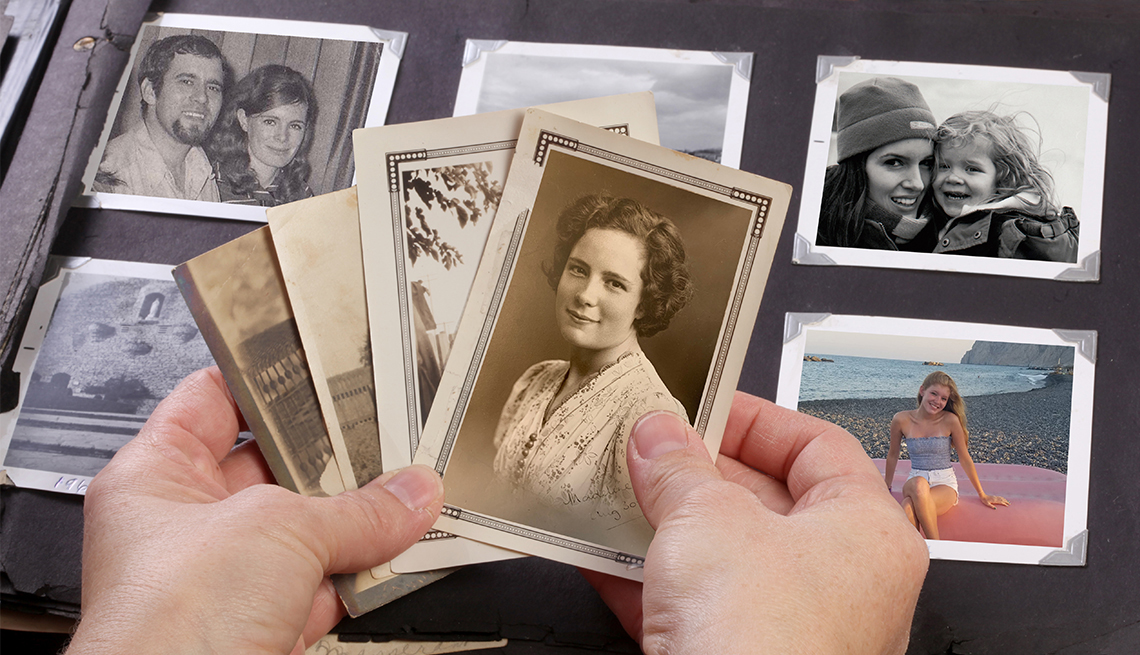 In my New Jersey basement after a pipe burst, my bare feet submerged, I felt relief. If my treasures were safe, I was, too. Organized collections of my lives so far were stashed neatly in waterproof tote boxes: as a child, as a student, as a model, as a 42-year-old mother of three. My two sons’ and my daughter's lives sat curated in their own totes. I opened one and pulled out the yellow box that contained my children's baby teeth, each packaged and labeled by child, position of tooth, order and date of its loss. Every birthday card packaged by year, school reports, scribbled notes to me and each other, their three baby blankets. As I cleaned up the water, I noticed the tote containing keepsakes from my maternal grandmother, Madeline. I didn't have many. I pulled her ring out from its Ziploc and ran my finger over the rough jagged prongs of the crown that no longer embraced its sapphire.

In my mother's bedroom, in suburban England, I stood next to a brim-full, black garbage bag. I was 11 and my mum had been dead for 21 hours, killed by a brain tumor. My grandma Madeline called from downstairs to tell me it was time to go and collect our fish and chip supper.

"Do not go nosing through that bag,” she said with uncharacteristic sharpness.

I wanted my mum. Failing that, I wanted her comb, her notebook, her Rive Gauche perfume. Her bed was naked, the green print of the Laura Ashley wallpaper stark now that the room was stripped of my mother. The drawers to her pine dresser were empty. I opened the black bag and touched her lipstick and her sheepskin slippers. I pulled out her appointment diary from 1968. It had a brown cover and little gold-edged cream pages. I flicked through, reading its scant offerings. September 16th, she had written, “Marry, 3pm.” I traced my fingertips across the pages. I wanted to keep it, and my mum's writing, close to me. I wanted to keep the things she wanted to keep. It was tiny, it fit in my palm. Scared of disobeying my grandma, I put it back.

Days later, my brother, Daniel, and I each packed a large holdall with our belongings to move in with our dad, stepmum and baby half brother. I chose my Laura Ingalls Wilder boxed set, clothes, Madonna poster and journals. At our new home, Dad asked what else we wanted from Mum's house; two guys who worked for him were going to clear it the following day.

"I'd like the blanket I had when I was a baby,” I said. “It's yellow and knitted; Mum had it in one of the cupboards."

I called Dad at work the next day.

"Did they find my blanket?"

My dad arrived home that night with my blanket, a gentle smile on his lips.

"I knew you were disappointed and I couldn't let it go,” he said. “I had the guys search the dumpster and they found it just before it all went to the tip."

I didn't hear that the belongings Daniel and I had grown up alongside — toys I forgot to ask for, Mum's owl teapot — were in a dumpster ready to be discarded with all the lonely things no one wants. I heard that my dad made sure he rescued my baby blanket.

Days after I had celebrated my 30th birthday in my New Jersey home with my husband, Jase, and our young children, I was getting ready to go to watch our eldest two kids in their elementary school winter concert. We'd moved to America six years prior, and today he had taken off work for the concert. The phone rang. It was my dad.

"Jo, darling, let me speak to Jase.” I knew something awful had happened. I gave the phone to Jase and waited. My grandma had died in a fire at her home.

In England for the funeral, we went to Grandma's house. Daniel, Jase and I breathed in the acrid odor of freshly extinguished fire. We looked at the damage. I had lost relics from my mother's life that I had assumed would one day be mine. I had lost the weekly letters I had sent her since Mum had died. Years of letters documenting my life, letters that Grandma saved. We found a trophy in an upstairs bedroom awarded to my mum for a university rally car race: first-place navigator. Blackened by smoke, the base warped by heat, I took it as a minor win. There were no major wins to be had.

At the funeral, the undertaker gave me Grandma's rings.

"The stone burned right out of this one, the heat from the fire."

My uncle overheard and told me that actually the stone, a sapphire, had been missing for some time. There were two rings, and my cousin Sarah let me choose first. I chose the one with the missing stone. I don't know why I was drawn to the incompleteness of it. Perhaps I was attracted to a tangible problem I could fix. I went back to America with Jase and the kids, my mum's smoky trophy, the stoneless ring and the feelings of loss and guilt. I should have called more. I should have written more. I should have done more.

The basement leak cleaned up, I brought Grandma's ring upstairs. I sat at the dining room table. A simple design, the band was thin gold, and the empty prongs silver and bent. It was too big for me, hanging loosely around my third finger. My 15-year-old daughter, Grace, sat with me. She was my mother's double: high cheekbones, auburn hair and freckles. She tried the ring on. It fit her perfectly.

The jeweler took his time to restore the ring, rebuilding the setting and selecting a sapphire. I collected it days before Grace's 16th birthday. I decided to give it to her to keep safely in her room, which in itself felt like a trust fall.

"It's beautiful,” she said, slipping it on. Before I explained that she wasn't to wear it out of the house, she was heading for the door.

"Let me take a picture of you.” I didn't add the implied, “in case I never see the ring again.” I could insist she leave the ring at home and be satisfied it wouldn't be lost. Or I could let her go.

Watching her leave, my stomach churned. I wanted to get the ring back in its new black box, tiny gold clasp turned, back inside the labeled Ziploc, in the waterproof tote in the basement. But I didn't. In the 18 months since I gave her the ring, she has worn it every single day — to school, the beach, parties, horseback riding. And every night when she goes to bed, she is still wearing it. She hasn't lost it yet, but I know she might. If it gets lost, it will reignite the smoldering embers of my bigger losses, but I am at peace with that. To see Grace, looking so much like my mother, wearing my grandmother's ring is important enough for me to risk the keepsake that has connected us all.