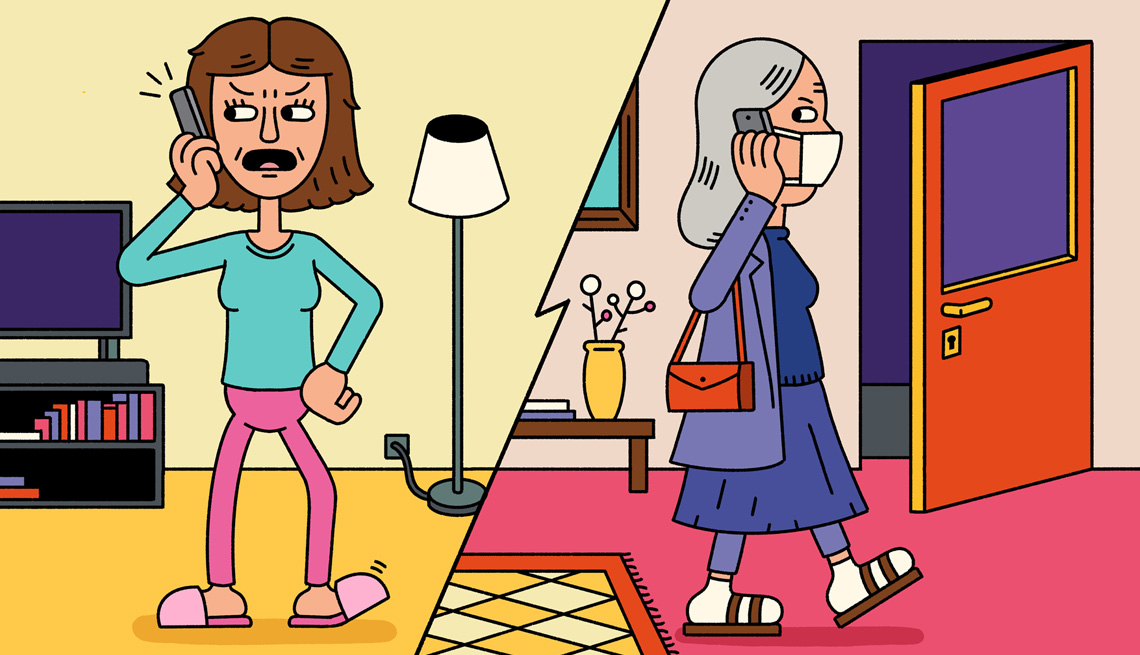 In March, just before New York state ordered residents to shelter in place, my 28-year-old daughter called me from her Brooklyn apartment to chat. As we talked we got on the topic of my gym, which is near my home in New Rochelle. In no uncertain terms, she told me to stop going. Then, with an audible intake of air, she continued, “Mom, you're young at heart. But, let's face it, you're well over 60."

I was, I have to admit, momentarily taken aback. I work out at the gym regularly, run a full-time writing business, can even pass for younger if the lighting is right. I'm not that old, am I? And there was another, more uncomfortable feeling: Why is my little girl treating me like a child?

Call it coronavirus role reversal. Authorities from the Centers for Disease Control and Prevention (CDC) to the governor of California have made it clear: If you're old enough to remember where you were when JFK was killed, you shouldn't venture out. But, especially for baby boomers, who still regard themselves as fit, active and youthful, that's easier said than done. And that's why their grownup children are stepping into an unfamiliar role, that of a nagging parent to their parents.

For most folks 60 and older, it's an out-of-the-ordinary, unexpected and sometimes-discomforting position to be in. Carla Manly, a psychologist in Santa Rosa, Calif., cites one client as typical. “She joked that her child is getting her back for all the restrictions she endured during her teen years,” she says.

It's certainly a new experience for many parents. Take Nancy Snell, a 68-year-old Manhattan resident and business coach specializing in adults with ADHD, who is used to frequent phone chats with her 29-year-old daughter, who lives in Montclair, New Jersey. But lately, their conversations routinely involve making sure that Snell and her husband, Stephen, 71, are staying in. “Our daughter is very frightened for us. As a result, she's on our backs,” Snell says. “You can't do this. You can't do that. Yesterday, I found myself replying, ‘OK, Mom.’ “

The real problems occur when the role reversal triggers long-standing parent-child tensions. For one thing, stress can bring out our worst selves. “If someone tends to be anxious, that anxiety starts ballooning. If somebody is controlling, they become more controlling,” Manly observes. But a further complicating ingredient is any longtime pattern of friction.

Take another of Manly's clients. Two years ago, after her husband died, her two grown daughters started to play a more active role in their mother's affairs, a situation the client found invasive and infuriating. So when her children began checking up on her shopping habits as statewide shelter-in-place orders went out, the woman reacted by pushing back much like, well, a child. In fact, says Manly, she started going out more than usual. And when she inevitably revealed those outings to her daughters, they got angry. “My client will throw a temper tantrum, and her daughters perceive that as a sign she's not behaving like an adult, giving them more reason to be critical,” Manly says.

There's also the matter of just how quickly the change has happened. As parents age and become more frail and less capable, it's only natural for adult children to step up and help out more. But that transition usually happens gradually, a slow evolution in the dynamics between the generations. As so much else in the world right now, however, this transition has occurred over a few weeks. “It's an overnight shift in how their children are treating them and how they see themselves,” explains Adrienne Meier, a Pasadena, California, psychologist.

Many parents say the nagging has worked. According to New Orleans resident Marva Lewis, 68, after the city went on lockdown in early March, her 24-year-old daughter, who lives a mile away, almost immediately informed her that she would buy and deliver her groceries. And when Lewis mentioned that she might go over to her office at Tulane University, where she works as a psychologist in the School of Social Work, her daughter would have none of it. “She told me ‘No way,’ “ says Lewis. “And she was right. I listened to her."

The tables aren't completely turned, either. Lewis understands that by allowing her daughter to do simple tasks like grocery shopping, she can help the young woman have some sense of control, at a time when everything is out of control. “I'm mothering her, and she's mothering me,” she says.

Ultimately, these intrusions represent something more profound — the adult children's real concern for their parents. “I'm so grateful to have a daughter who cares genuinely,” Snell says. “She's doing it out of love.” That's not something any of us should take for granted.