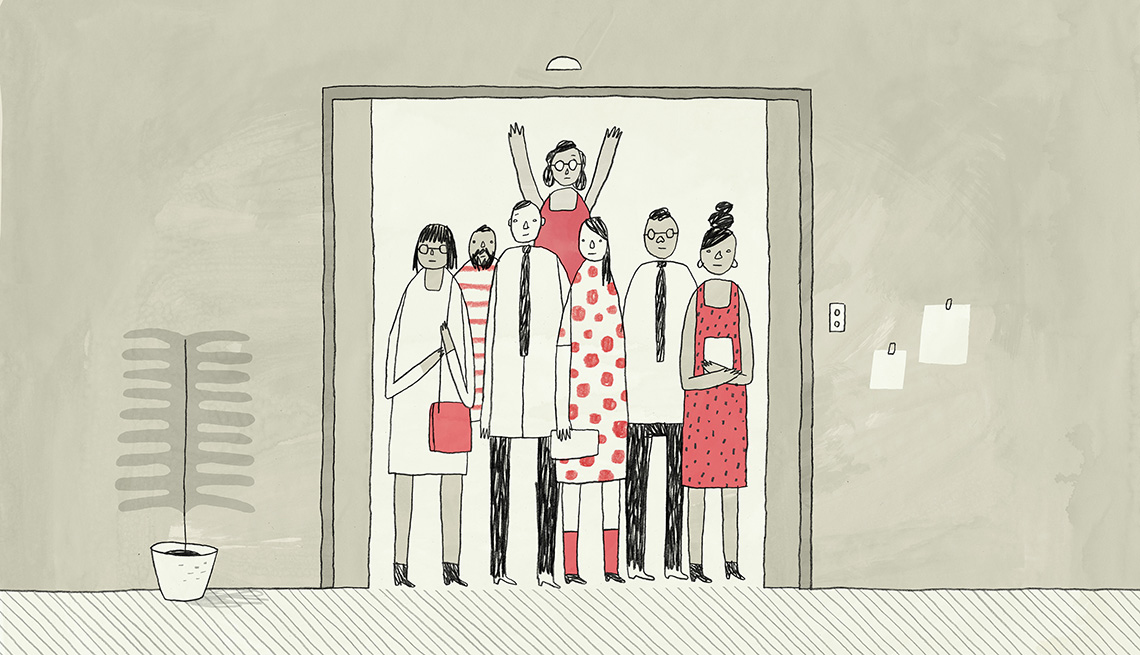 I have a special superpower: I am invisible. I am a 69-year-old woman and didn't discover that I had this “gift” until I was in my early 50s.

Lots of women know precisely what I'm talking about. As they age, they feel increasingly unseen — marginalized by the younger, the newer, the fresher fruit in the basket. I'd opine that at the core of this phenomenon is an overall broader lack of respect for the elderly except that many older men seem to stay visible pretty much all the way down the Depends aisle. Women? Not so much. And I suspect it's a contributing factor as to why more older women than men live in poverty, which the National Institute on Retirement Security says we do in spades.

Invisibility hurts, and not just our feelings. When younger people can't see me, they behave as if I no longer have anything worthwhile to contribute to civilization as they know it. Yeah, that part gets old fast. I remember when, at age 59 and newly unemployed, I went on a job interview to be the marketing director for a startup in Santa Monica, California. With my hair freshly coiffed and wearing my best interview suit, I climbed the three flights of steps up to the “office” and knocked on the door. I knew from the minute the door opened that I wasn't who this company wanted. The young woman hiring manager asked me where I saw myself in five years, and I bit my tongue so as not to blurt out “dead with my ashes scattered at sea.” On the way down the three flights of steps, I kicked off the stilettos and knew I would never hear from that company again. All they seemed to see was someone older than their mothers. They appeared blind to my abilities.

Invisibility doesn't just mean that as a woman I can now walk past the construction site at the corner and no longer be subjected to catcalls and whistles. (And a pox on the head of any person who ever thought that felt good or took it as a compliment.)

No, invisibility cloaks my ability to be validated in meaningful ways. Instead of seeing me for who I am, younger people make broad — and often false — assumptions about my skills, my institutional knowledge and pretty much everything else that I can bring to the table.

Remember the highly identifiable episode of Grace & Frankie when the duo fails to get a sales clerk's attention as they try to buy a pack of cigarettes? Instead of waiting on them, the clerk provides service to a younger woman who waltzed in after them and asks for lottery tickets. Grace's meltdown is replete with the anger and language of the invisible. “Do you not see me???” she beseeches the clerk.

Bingo. No Grace, he does not see you, even though you have accomplished more than many as a successful business person, community leader and mother. Your indignation is righteous; your hurt feelings, justifiable. We have all been there. And we applaud Frankie's revenge — pinching the pack of cigarettes because, as previously noted, being invisible does have some upsides.

Another upside are my feet, which personally walked their last pair of heels to the trash bin and have been much more pleasant to be around since I became invisible. No one sees the clodhopper sneakers on them or notices that giving up pedicures is a seriously great way to save money.

Here's the thing: As long as appearance is the yardstick used to measure a woman's value, older women will get the short end of it. Blame Hollywood for often portraying older women in an unflattering manner; blame our beauty-is-defined-by-youth culture for leaving us out; blame the entire cottage industry that exists because it convinced us that the only way to age gracefully was to actually not age at all. Aging gracefully is just a marketing slogan to sell us products that fuel the hope that we can become visible again. I'm not buying any of it, literally.

Here's a crazy idea: Let's flip the script on older people, especially women. Instead of looking for the nearest pasture to send us out to graze with our knitting needles, why not offer us some respect? Instead of pushing us aside, make room for us at the table and hear our thoughts.

If, for no other reason, the surest way to make money going forward will be to figure out what boomers are going to need for the next 20 or so years and then produce it. And you need us to tell you what those things are. I would start with “stop treating me like I'm invisible.” A pair of stylish comfortable shoes wouldn't be bad either.