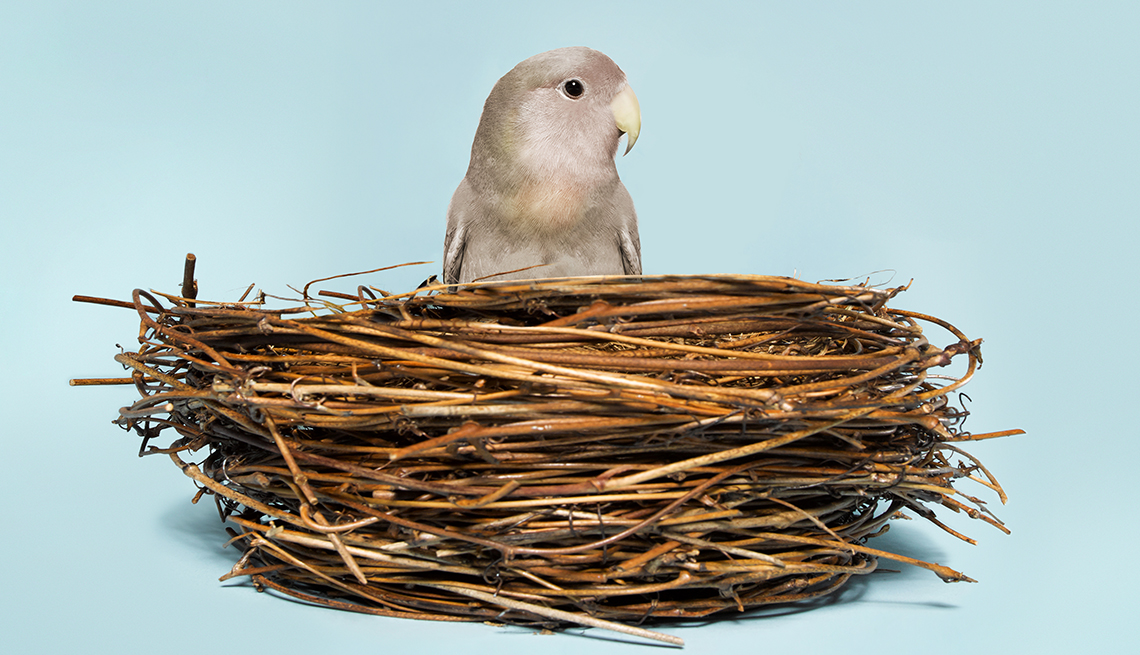 When I was a young mother, naive, baby vomit in my hair, I couldn’t imagine being an empty nester someday. Insofar as I had a vision of the future, it was traditional. I would shed a tear as I packed a wooden-sided station wagon for my last departing teenager. My husband and I would spend our golden years reconnecting, proud of our progeny, our legacy.

And … life didn’t work out that way. By the time my only child was a preschooler, I was a single mom. And a decade later, I was remarried, with a blended new family. I’m not atypical. Family has changed — nearly a quarter of all households in the U.S. are headed by single moms. Shouldn’t our expectations about empty nests change, too?

When you’ve done nearly all the parenting solo, what does it mean to suddenly find yourself redundant? What if you don’t have a partner to grow old with (and you’re cool with that)? What if you do, and he’s not the guy you had kids with?

I talked to five moms to get their perspective on single parenting and the empty nest years — the good, the bad and the unexpected.

Your kids are more likely to be independent.

According to Leah Klungness, psychologist, single mom and author of The Complete Single Mother, solo moms generally have an easier time navigating the “empty nest transition” because they’ve shared household responsibilities with their kids from the start. And the kids have an edge on launching, too.

Without the bandwidth for helicopter parenting (or being “magic mommy,” as Klungness put it), the children of single moms enjoy a “special kind of maturity that results from responsibilities fulfilled without endless reminders.” Mastering skills like laundry, vacuuming and cooking gives them “confidence to leave the nest with greater odds for success.”

Jennifer Ball, 52, a Minneapolis-based blogger known as the “Happy Hausfrau,” was a stay-at-home mother with four small children when her then-husband walked out for his mistress; he later defaulted on financial support. Ball bounced back and now runs a successful online community supporting other single parents. Her youngest just graduated from high school.

Ball says raising kids is hard enough for two people; “for a single parent it’s a Herculean task.” After children turn 18, child support (assuming you can collect) usually ends “despite the fact that kids continue to eat and require clothing and shelter.” The financial loss can be “jarring, but we all eventually figure out how to get by.”

The rewards of being the show-up parent are sweet, however. “Seeing your kid step up and make their post-high school or college dreams come true makes all the struggles, all the scary times, all of the sacrifices absolutely worth it.”

Ball’s advice to solo moms: Take pride in a job well done, and “don’t forget to give yourself a little high five.”

You may have an identity crisis.

Going from 24-7 motherhood to an empty nest can also be heartbreaking, says Annie Desantiago, 58, of Valencia, California. “One day they don’t need you in the same way. You have an empty bedroom and you can still hear their laughter, but they are not there. They’re living their life” — a life in which you’re not a big priority.

To be a parent is to live with conflicted emotions. “You still worry, but at the same time you are happy for them, so you can’t even be mad about it,” Desantiago says. “People say, ‘Get a hobby’ — as if! Like a hobby can replace the job of a mother.”

Your space becomes your own.

Darlene Walker, a 64-year-old mother of four in Chicago, describes raising young adults as more “revolving door than empty nest.” Supporting her children’s educations and going through a divorce while her youngest two were in college meant postponing solo living. “My son has lived with me off and on after finishing law school while paying down his student loans and securing his permanent job.”

But since her last child moved out, Walker says the freedom has been exhilarating: “I like my own company. How great it is to walk around and drink my coffee naked when I want?”

And the best part? “I can have chocolate-covered almonds for dinner because I don’t have to set a good example.”

It can be a new beginning.

As any single mom can tell you, dating while raising children is about as easy as organizing a NATO air strike. To Kerri Brewster, 45, of Fort Lauderdale, Florida, empty nesting meant finally making herself — and her personal life — a priority:

“I reintroduced myself to doing things I had enjoyed before I became Mom. I devoured books, watched Game of Thrones. I had my hair cut and colored more than once a year. I got regular manicures and pedicures, and I took care of myself for the first time in 18 years.

“I still miss my son so much it hurts sometimes, but I have also developed closer friendships and learned so much about myself. I even started dating a wonderful man, not something I dared to do while my son was at home. Yes, my nest is empty, but my heart is full.”