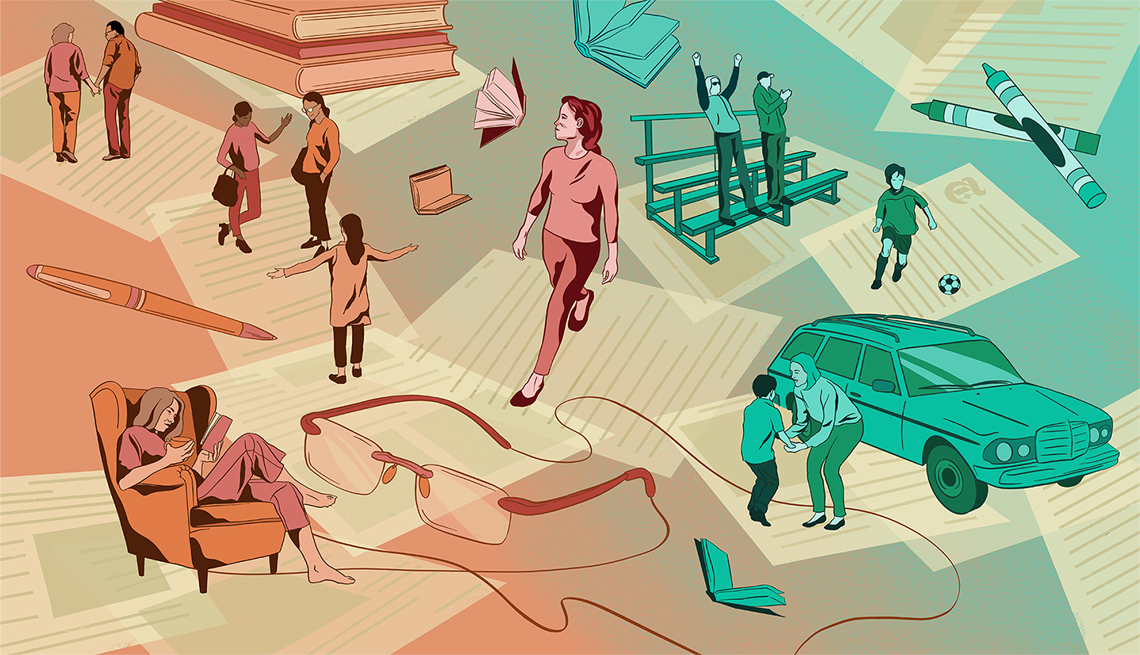 When my mother turned 50, we had a family party for her in our backyard. At the time, I was recently married and had just started a new career in retail management. It felt like my adult life was beginning just as my mother's life was, well, not ending but slowing down. Her wish as she blew out the candles was to be able to retire from her job and move to Florida, like so many of her friends were doing. Although she had been an avid tennis player, she no longer played because her knees hurt when she ran. Instead, her goal was to learn canasta and mah-jongg so she could bond with women she planned to meet in her not-so-distant-future retirement community. And she hoped I would make her a grandmother soon.

I remember thinking that my mother was “old” when she turned 50, and yet as I headed toward that magic number, I didn't feel old. As my birthday approached, friends and family kept asking me, “What are you going to do for 50?” and what they meant was, “How are you going to mark the occasion?” Family dinner, trip, big bash or hide under the covers hoping it wouldn't find me? And while I did choose the party, my concern wasn't so much about how to celebrate the day but how to embrace the new decade.

Instead of a midlife crisis, I had a midlife revelation. I was ready to start finding out who I was beyond being a daughter, wife and mother. I started thinking of all the places I hadn't been, both literally and figuratively, that I still wanted to get to. But to make it to all those places, I had to start taking better care of myself through diet and exercise.

Although I began writing professionally in my 40s, it was in my 50s that I became willing to take more risks in my career. I realize that part of the reason I had not yet reached my goal of being published in the New York Times was that I hadn't dared to submit anything because I feared my work wasn't good enough. Maybe it wasn't, but I would never know if I didn't hit the send button and find out. My fear of rejection — something that colored my actions before I turned 50 — became dwarfed by my fear of not even trying. And while I haven't been published in the Times (yet) and have gotten a lot of rejections, I've also never had more professional success.

Do I miss being younger? Of course. I miss having all my kids living at home. Those days were great days. But these are great days, too. Car pools have been replaced by road trips with girlfriends and my husband. And rather than watching my kids participate in sports, I have more time to get in the game myself on my spin bike or yoga class.

What's more, my husband, instead of watching my kids play sports, is participating himself, in a 50-and-over league.

I loved reading bedtime stories to my kids, and I also love that I have more time to read more books for my own enjoyment.

I look around at my peer group and see that so many women in their 50s, 60s and 70s feel the same way I do. We aren't thinking, Wow, we are old; we are thinking, Wow, this is our time. Our time to take the trips we put off, to invest in our marriage (or get out of it if we aren't happy), to make a career change or to do anything else that feels right. Naturally, we still have commitments, jobs and people who depend on us, but we can make ourselves a priority, too.

The best example of the new 50s is my friend Renee. Although my mother and her peers looked at their 50s as a time to stop working and move to Florida, Renee chose to do the exact opposite. She bravely hit the restart button as middle age approached. A Florida native, she always wanted to live in New York City and work in the theater. Instead, in her 20s she married, had children and helped her husband in his business. When her youngest was in high school, she decided it was her time to go for it, and she did just that. She got a divorce, moved to the city and landed her dream job.

Renee is just one of many women rewriting what it means to be middle-aged. In fact, this past May, the Wall Street Journal ran a piece titled “The New Rules of Middle Age; Written by Women,” about recent books from women in their 50s and older. From 60-year-old Candace Bushnell's Is There Still Sex in the City? (the answer is yes! — at least in the suburbs) to 55-year-old Michelle Obama's memoir, Becoming, all of these stories reflect that there is still much more to come for women as they enter midlife. The book doesn't end at 50; it's just a fresh chapter, one with blank pages screaming to be written.

So grab a pen, think about what you really want, and make what happens next the juiciest part of your story.