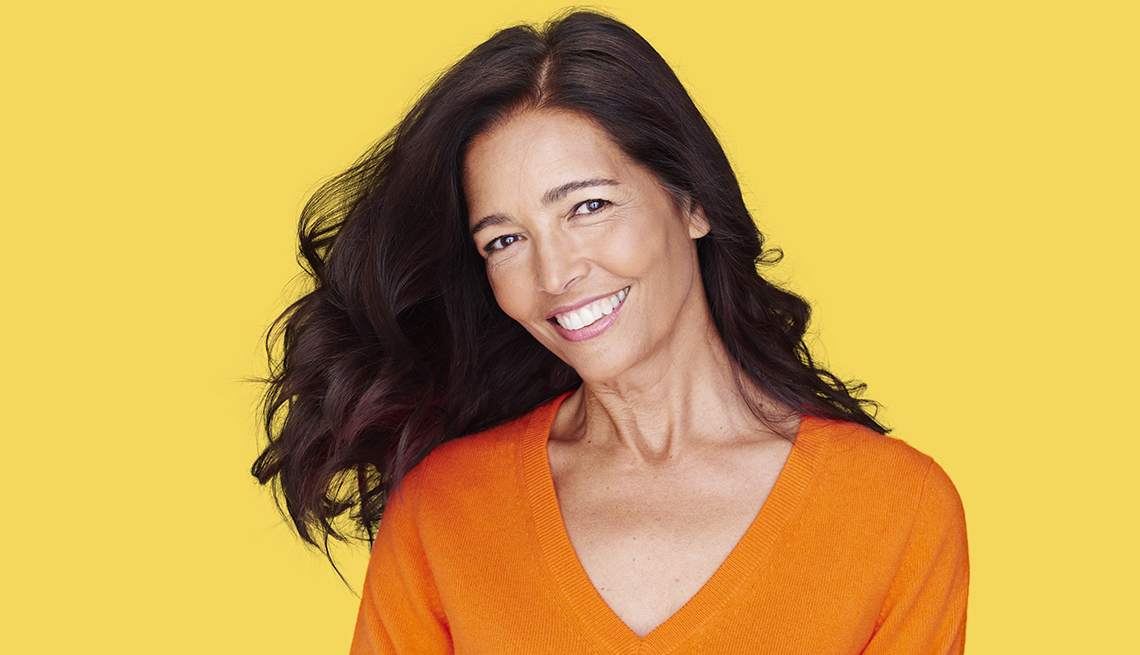 Model Juliette Branker is a beauty industry disruptor at age 62.

In 2008, Juliette Branker was a Lowe’s Home Improvement live-nursery specialist, helping customers pick out perennials, hauling 50-pound bags of topsoil and cutting down the occasional Christmas tree with a chainsaw. When her partner of 30 years passed away, Branker, then 51, decided to travel to Argentina, “a place where I knew no one, didn't speak the language, could get away and get myself together.”

Planning out her vacation, an ad for salsa lessons at a local studio popped up. Thinking, Why not?, she clicked and signed up.

At one lesson, a fellow dancer asked if she was a model.

“Far from it,” Branker recalls replying. “I drive a forklift at Lowe’s Home Improvement.”

The woman, a model herself, gave Branker her agent’s contact information. Branker, a 5-foot-8 ½-inch-tall natural stunner with olive skin (she was born and raised in Barbados to an Irish American-Black St. Lucian-Indian mom and a father of Scottish and Caribbean heritage) and a lithe, athletic frame, was intrigued. At 25, friends had convinced her to submit photos to some modeling agencies. “They were mailed back, saying I didn’t have the look they wanted. I said, ‘Well, I’m never gonna try that again.’ Who wants to deal with that kind of rejection? So I shut that door. But when this lady gave me the name of her booker, I thought, What do I have to lose? I was 51. My partner was gone. Life is so short … I wanted to experience new things.”

Branker emailed photos to Patty Sicular, then-vice president of Ford Models, Inc. “I’d just bought my first Mac and didn’t know how to send multiple attachments, so I sent three emails, each with a picture,” Branker recalls with a laugh. One picture was a swimsuit shot from her recent Argentinian vacation, her newly shortened brunette hair blowing in the spray of a waterfall, megawatt smile on full display, reading glasses dangling from her black-and-white bikini top.

Branker did and was offered a contract on the spot. Four months later, on her 52nd birthday, she was modeling a menswear look on the Today show. The Jamaica, Queens, New York, resident has since appeared in ads for American Express, Macy’s, Chico’s and Nordstrom; in a Great Skin Guide for Family Circle; a Miu Miu ad shot by Steven Meisel and more. When posting pics to Instagram, she includes the hashtags #proage, #modelsover60, #fashionover50, #beautyatanyage and #grateful.

Oh, and despite being signed with multiple agencies in their Classic divisions, including Heffner Management in Seattle and IconicFocus in New York City, Branker still drives a forklift at Lowe’s.

Between modeling gigs, 5 a.m. retail shifts and caring for her newly widowed father who lives across the street (her beloved mother recently passed away, just shy of her 99th birthday), Branker, now 62, spoke with us about being a beauty industry disrupter.

What are your standout features?

I think I look young for my age, and my job is very physical, which helps me stay in shape. I’ve never been in a gym – Lowe’s is like my gym. I’m never sitting; I’m lifting concrete blocks, cutting down trees, carrying giant bags of salt. I think it’s mostly genes and lifestyle.

Also, I’m described as ethnically ambiguous and have been cast as Black, Latino, white and Asian.

Have any agencies or clients critiqued your looks or tried to make you look younger?

There’s been no pressure on any level – about weight, skin color. (Branker often has a tan from working outdoors.) I do have something called hooded eyelids, so I’m often cast for beauty spreads offering tips on playing those up.

But – if they ask me to not smile for a shoot, I can’t do it.  I end up looking miserable. I never get those jobs.

Any competition with younger models?

Not at all. I make friends easily and love guessing where other models are from by their accents. For the Miu Miu ad, myself and Marian Moneymaker, another model in her 60s, known for her flowing silver mane of hair, were chosen more for background and foreground – we weren’t the principal characters. That’s okay. I’m a humble person, grateful for any job I get. I don't have to be the quote-unquote star. I’m getting pampered with hair, nails, good food, music, lively happy people. It’s a different world, and it’s nice to step into it in any way.

When Vogue named me a Girl Crush. (Tommy Ton, who cast Branker as a model in his Spring 2019 collection, told Vogue, “I’ve always found women of various ages to be the motivating factor in my street photography … I think it’s really important, especially now, to cast models that people can relate to …”.)

A Viagra or Cialis commercial – they pay big money!

What’s your advice for women in their 50s and above who have dreams of modeling?