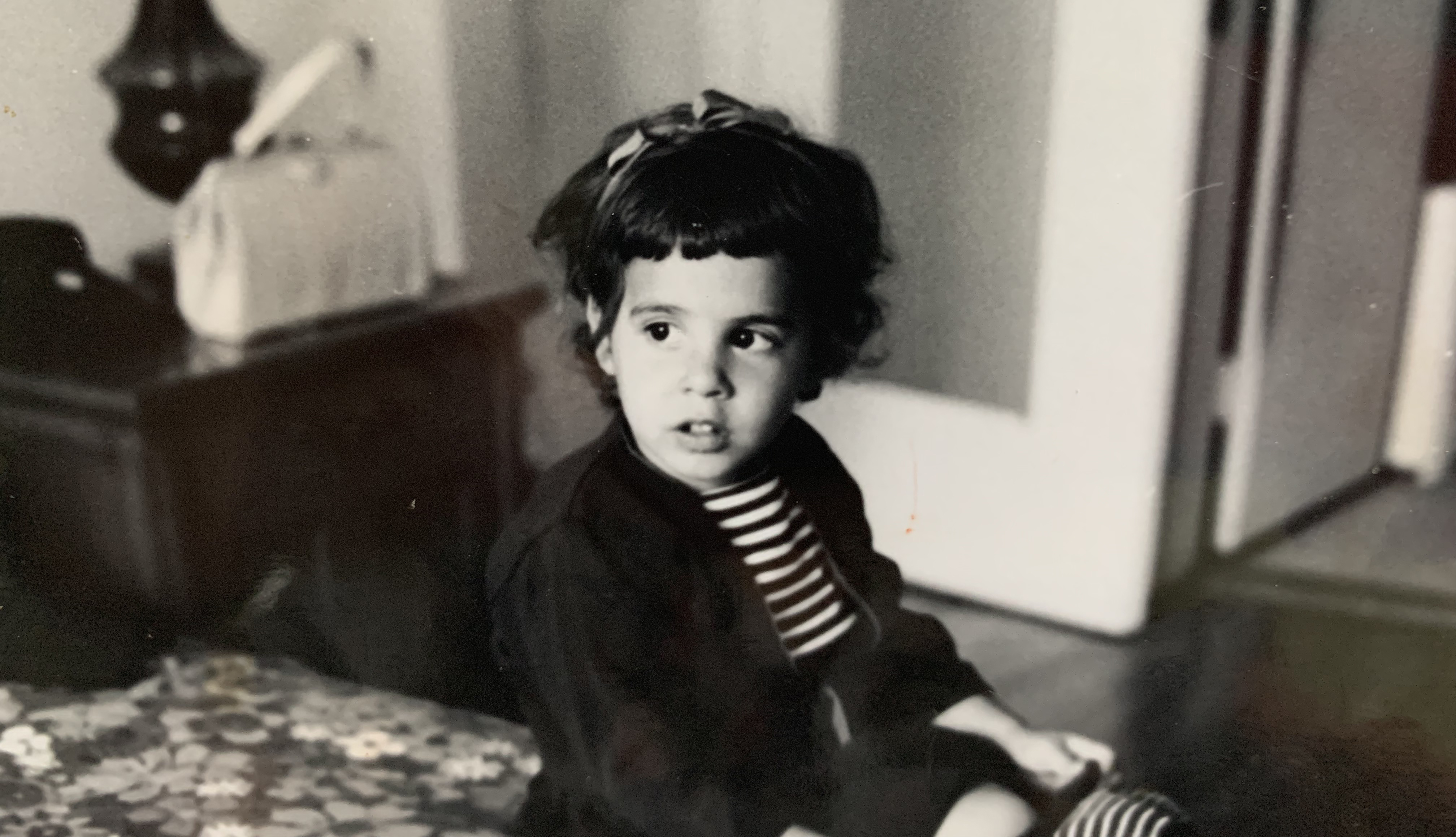 Laura Zinn Fromm as a child

Latitude means an imaginary line around the earth, room to maneuver, a degree of tolerance of exposure error.

I was never the apple of my father’s eye, at least not that I remember, though he took hundreds of black-and-white Polaroids of me as a baby and when I look at them, I see a baby smiling adoringly at the man behind the camera. He may have adored me back, though the adoration faded over time. When I was born at New York Hospital on East 68th Street in Manhattan, he was doing his residency in radiology there, and he loved taking black-and-white images. In many ways, his life became a study in black and white: Two years after I was born, he threatened to commit suicide by jumping off the roof of that hospital and was hospitalized at Payne Whitney, also on East 68th Street.

Recently, my husband and I rented an apartment on West 68th Street, and I have been thinking about latitude, and how we are drawn back to people and places that both delight and confound us, and sometimes have to give them some latitude.

My father recovered from that first suicide attempt and went on to become a handsome, successful, tennis-playing radiologist who loved the sun, the ocean, large dogs, trips to the Caribbean, biographies of presidents and intense games of singles. Trips to Zabar’s to buy bags of bagels, Famous Amos chocolate chip cookies and huge pieces of whitefish, and impromptu trips to Barnes & Noble, where he’d buy enormous piles of books, were some of his favorite activities. People loved him — or didn’t like him at all. I was in both camps.

It is strange to write this, years after he died, but I miss him more than ever. He could be a lot of fun and had a wicked sense of humor, though he also had a ferocious mean streak. He went through bouts of depression and rage, but could also be generous and loving. One night, he’d be witty and wise, helping us write papers and offering tips on how to study (“write it down” was his suggestion for committing arcane facts and formulas to memory), and the next night, he could lay one of us out like a piece of steak and start carving out little bits, before hacking away large chunks. He had two wives, two fiancées and three kids. You could survive living with him, sure, but after you moved out, you’d wonder how you’d managed.

In May, on my father’s yahrzeit — the anniversary of his death — my husband and I were up in rural New Hampshire, visiting our younger son,  so instead of going to synagogue, I stood in a hotel room, looked out the window, Googled “kaddish” and said the mourners’ prayer for my father. I always forget that saying kaddish actually means praising God despite your loss. My son was sitting a few feet away from me and started to speak fondly of his grandfather. I had an epiphany: I should be praising Dad. I should be telling my kids what was good about him. Or to quote the father in Daniel Mendelsohn’s great memoir, An Odyssey: A Father, a Son, and an Epic: “Your father is your father.”

I’ve been listening to Mendelsohn’s book in the car, where I also listened to Keggie Carew’s Dadland. Though I’ve loved memoirs about difficult fathers (Tobias Wolff’s This Boy’s Life, Geoffrey Wolff’s The Duke of Deception: Memories of My Father, Jeannette Walls’ The Glass Castle, Tara Westover’s Educated), I have trouble reading the happier stories. But I can listen to someone talk about their loving fathers (Michelle Obama’s father sounded like a saint in the Audible version of Becoming). My sons have fond memories of my dad. Why don’t I tell them some more?

So, 14 years after my father’s death, I’m trying to unpack his behavior and give him some latitude. My father was mentally ill. Bipolar, narcissistic, on the receiving end of his own father’s rage and depression, Dad overcame huge obstacles to go to college and medical school. You could argue that he tried his best, but his tools for coping were burying himself in history books, exercising and working hard, and none of those activities necessarily translates into loving behavior toward your family. Sometimes he was medicated; sometimes he medicated himself. He once wrote himself a prescription for lithium that I filled. If hindsight is 20/20, compassion might be, too. I had almost no sympathy for my dad while he was alive. Did he want it?

Doubtful. But he might have wanted insight and understanding, which I’m trying to give him now.

Growing up, I didn’t suspect he was mentally ill, though I knew this father was not like the others. He was friendly and flirtatious and my friends liked him. My mother, not so much. And that was part of the problem. I looked like my mother, and as my parents’ marriage disintegrated, my father took his rage at my mother out on me. Though I believe she loved him wildly at the beginning, she didn’t know how to handle his mood swings. She was used to the kind of love her father showed her — adoring, calm, endless. My grandfather was a math teacher at Stuyvesant High School, logical and patient, easy to live with and love. My father, coincidentally, had been one of his students. Though my mother said that my father was mean to her early on, she did not perceive this as a red flag. In her world, men were not mean to women; spouses treated each other with respect. If you haven’t grown up with this kind of bruising behavior, it doesn’t make sense. (Of course, behavior associated with mental illness often doesn’t make any sense.) In the course of her parents’ loving 65-year marriage, which took place in their modest, two-family house in Brooklyn, my mother had witnessed only love, logic and good sense.

That was not the kind of household she and my father created. My father hurled insults at us for more meals than I can remember and called us all names. I was “Demandola” and “Indignola.” My mother was “sleazily charming.” He called one of his significant others “a parasite” and later questioned the durability of my marriage. He resented the comforts he provided for us, though in retrospect, I suspected he resented that we couldn’t see how hard he was working to cover up his sadness and vulnerability. He had grown up exposed to bad behavior: His own father had insulted him and his mother much the way my father insulted my mother and me. I didn’t learn about my father’s first suicide attempt until I was in high school so was never able to fully piece together that something might be broken within him. My mother left him for good when I left for college. My father remarried, had another child and attempted suicide for the second time, when he was almost 57. Miraculously, he survived and died nine years later of lymphoma. Though cancer and age mellowed his fury, he was never what you would call easy.

But he could be loving and astute. Soon after I had my second son and we were walking with the boys in the double stroller to the playground near our house, he reminded me that my ambition was still lurking somewhere and told me not to stop working. He took my older son swimming and to the movies while I was in graduate school, and bought the kids extravagant gifts — a trampoline and an electric car — so they would always have something to do in our backyard.

If a parent hasn’t always been kind to you, and occasionally seemed intent on destroying you, how do you cope? What do you owe a parent who is mentally ill? Therapy helps, as does befriending people whose parents were also mentally ill (three of my closest friends had suicidal fathers). But what has been most helpful has been meditation, taking notes and focusing on what was good. My father was smart, he taught us to love books and gather information, he made us laugh, he was passionate about his grandsons, and whenever we struggled to remember something that was difficult, he told us to write it down. Now I am, Dad.