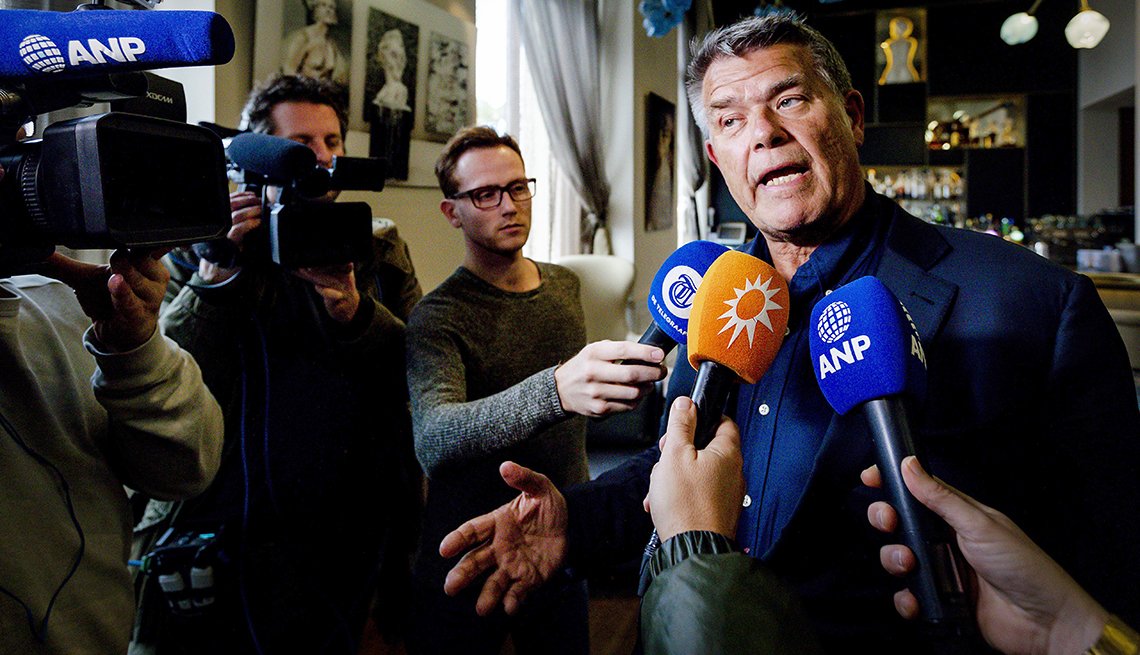 Emile Ratelband, 69, answers journalists' questions following the court's ruling regarding his legal bid to slash 20 years off his age.

A Dutch man named Emile Ratelband, 69, has garnered headlines around the world for wanting to shave 20 years off his age — legally. Ratelband, who says he feels and looks younger than his biological years, claims he has experienced age discrimination — not to mention a few painful setbacks on the dating front when younger women learned his actual birthday. He petitioned a district court in the Netherlands to make his legal age 49, saying he would even be willing to delay receiving a pension.

The court was not convinced.

“Unlike the situation with respect to a change in registered name or gender, there are a variety of rights and duties related to age, such as the right to vote and the duty to attend school,” the court wrote in a statement. “If Mr. Ratelband’s request was allowed, those age requirements would become meaningless.”

But Ratelband shot back. “We live in a time when you can change your name and change your gender,” he said. ”Why can’t I decide my own age?”

That comment alone triggered a tsunami of protest from the trans community and more than one person compared him to Rachel Dolezal, the civil rights activist of white-European ancestry who was discredited for claiming to be a black woman.

While a Dutch court put the kibosh on Ratelband’s petition for a legal age-change, the case opened the proverbial Pandora’s Box and sparked some imaginative conversation about what would happen if, in fact, people could legally change their age. Turns out, a lot would happen in an age-fluid society — and not all of it good.

For one thing, it wouldn’t just be older people trying to manage the age clock. Certainly the age-fluid pendulum could swing in both ways. Imagine the impact on the U.S. Social Security Trust Funds or its pension systems if a wave of 40-year-olds announced they were tired of working, felt their true age was 66 and wanted to tap into their retirement monies. And in terms of health care, age-fluidity laws would certainly be the fastest path to having “Medicare for all,” wouldn’t it? All you would have to do is change your age to 65 and voila!, you’d be covered.

And as imaginations were set free, questions were raised: Would younger people simply declare themselves an age too old to serve in a draft? Or old enough to drink alcohol, drive a car, drop out of high school and/or run for office? Might be a way to get more of them to vote.

Can’t you just see what would happen at the car rental counter during spring break when a bunch of 17-year-olds said they felt, in terms of maturity, they were at least 25 — the standard minimum age to rent a car in the United States. For that matter, would a 16-year-old’s car insurance rate fall because he feels he is 28?

Senior discounts, anyone? Heck, who wouldn’t want to flash an AARP card to knock off a few bucks off at the movie ticket counter?

But then there is the more serious side of age fluidity. The trans community, in particular, doesn’t appreciate having age fluidity be conflated with gender. Brynn Tannehill, activist and author of Everything You Ever Wanted To Know About Trans (But Were Afraid to Ask), told AARP that where the comparison goes wrong is with the concept of immutable characteristics. “It almost goes without saying that you cannot change your age. Neither can transgender people change their gender identity (trust me, we have all tried mightily to not be transgender before we transition). When transgender people transition, they're not changing sex, they're making their bodies match their gender identity.” Ratelband’s comparison to the trans struggle is “offensive,” Tannehill says, and belittles her community.

Ratelband, who describes himself as a “young god” — causing more than one set of eyes to roll — plans to appeal. Whether he’s a man on a heart-felt mission or, as the Washington Post suggests, a man with an agenda to grow his Twitter following for his “positivity coach” business, remains to be seen.

One certainty is that he is no stranger to being a provocateur. He previously filed petitions to legally name his twins Rolls and Royce, which the courts also rejected. He founded and named a political party after himself — The Ratelband List, which was short-lived. And his claim to be striking out on Tinder may have something to do with the line in his biography from the Ratelband Research Institute that states that he is in a “steady relationship with the woman of his dreams.”