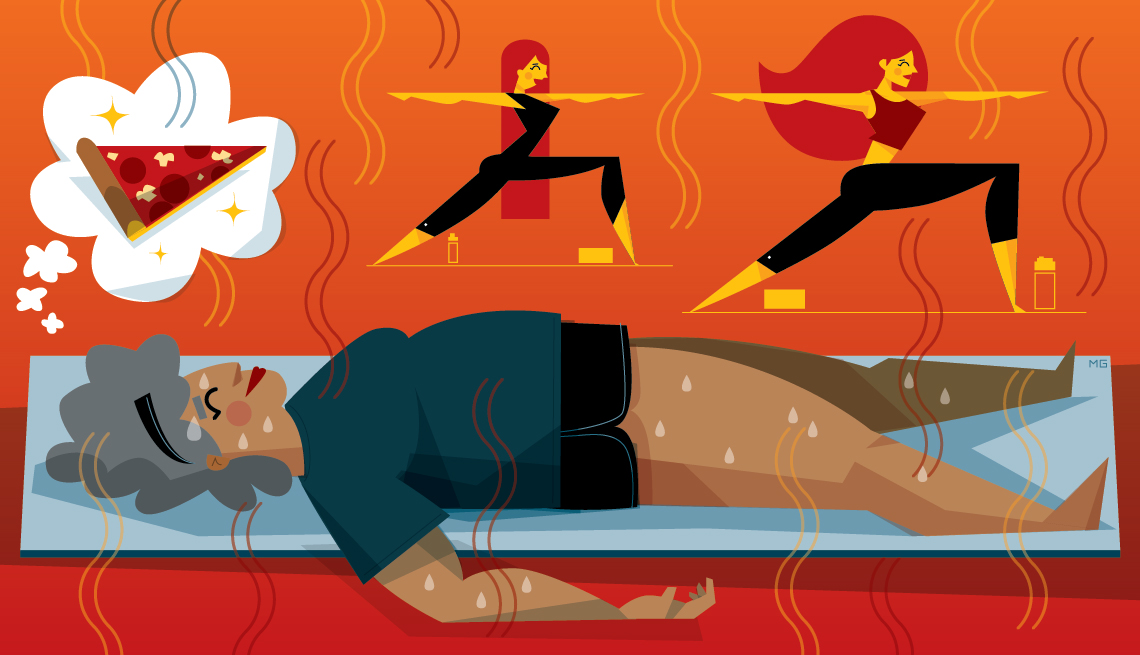 My mind is definitely not where it should be. I am trying to hold Warrior 2 for 60 unendurable seconds. There's clearly something wrong with my counting speed, because when I hit 80, we're still holding. At 90, the instructor gives a little laugh and says, “Let's do another minute.” Then she keeps talking. She wants me to empty my mind. I hear the words “calm” and “peaceful,” but my mind is chanting a slightly different tune. It's about as far from “om” as a four-letter word can be, and indicative, I'm sure, of how far I have to go spiritually. Finally, the instructor announces a reprieve. “Child's pose,” she says. I drop into a fetal position and think about pizza.

I run, swim and bike regularly, but my motivation fizzles when I reach the end of a workout. After pushing up hills and sloughing off miles, I buckle to the exhausted, lazy delight of being done and rush through some half-hearted stretches. I know all the reasons why I should stretch, but I grapple with following through, and my body is beginning to pay the price. More and more often, I find myself reaching for the ibuprofen. When someone suggested I give hot yoga a try, I was intrigued. Although my perimenopausal body has suddenly started to love AC and fall temperatures, my muscles still sigh with relief when I soak in a hot bath or use a heating pad.

Five minutes before the hot yoga class started, every spot was taken. I took a good gander at the participants and my anxiety began to ratchet up. I was intimidated. Not only did the vast majority of the participants seem to be under 40, I bet not more than five could have joined me for a martini. The young women looked like they'd been pulled from a Lululemon catalog, lithe and fashionable in a rainbow of second-skin Lycra. I stood out like a lampshade in an old, forgiving T-shirt.

For the next 90 minutes, I struggled to follow, but I was always a step or two (or three) behind. The participants bent and folded, but I couldn't even touch my toes. The instructor came by, time and again, to show me modifications. When the poses transitioned to the floor, I used the opportunity to cheat and lie motionless. During inversions, I watched, fascinated, as people kicked effortlessly into handstands. I tried to rejoin the class with some ab work, but by then I could barely move. Finally, it was time for Savasana, or corpse pose. I laid there like a waterlogged starfish, ankles turned out and palms up. This was my great shining moment. Nobody could beat me at lying exhausted on the ground. My stomach rumbled, reminding me about that pizza. As I gathered my things after class, I realized, to my surprise, that I felt relaxed and deeply satisfied. I was partly depressed by my inadequacy, but I was also inspired. I wanted to go back.

Truthfully, I haven't improved that much over time. I'm still more of a toaster oven than a pretzel, but sometimes I manage to stay in a pose for a fraction of a second longer than I originally intended. Or I shrug off the debilitating inner voices of self-consciousness and self-doubt and rise, surging into Half Moon or Crow, feeling impossibly confident and weightless and indomitable for one glorious second before I crash to the mat. The instructor's words often penetrate my inner, suffering monologue. Is it yogic gibberish? Are the encouragements trite? Perhaps and yes, but the lessons often reverberate in other areas of my life. Here are a few of the things I've learned along the way.

It's OK to fall

Have you ever watched a child on a ski slope, or on ice skates? They fall, get up and fall again. They don't let their fear stop them from trying. Why do we stop embracing this natural learning process as adults? It's trite to say, “It's OK to try.” But, really, how often do we try?

This is one of the most challenging aspects of both yoga and life for me. At any given moment, instead of being where I am—playing a game with my kids or eating dinner with friends—my head is elsewhere, worrying, either by scrambling the rocks of an uncertain future or steeping in the pitfalls of the past. I try to use the same nonjudgmental reminder from class. When one notices the mind has drifted, gently bring it back.

In all the time I spent looking around and comparing myself to everyone, nobody ever looked back. I was the only person judging. It was up to me to let go of my self-consciousness and focus on the only thing that matters: my own progress and journey.

I also realized that how one approaches the discomfort in a pose can be a good metaphor for the rest of life's discomforts. I can't control what happens, but I can control my response. Can I acknowledge the feelings and sit with them, even briefly? Can I allow myself to be frustrated without getting angry? If I do give up, will I try again?

We're already breathing, right? Wrong. I didn't realize how frequently I wasn't until the yoga instructor told us to stop holding our breath in the middle of a difficult position. And, you know what? I was holding my breath. I was clenching my jaw, too. Our bodies mimic our brains by tensing or clenching in moments of stress. Deep breathing increases the supply of oxygen to the brain, stimulates the parasympathetic nervous system and causes us to feel calm.