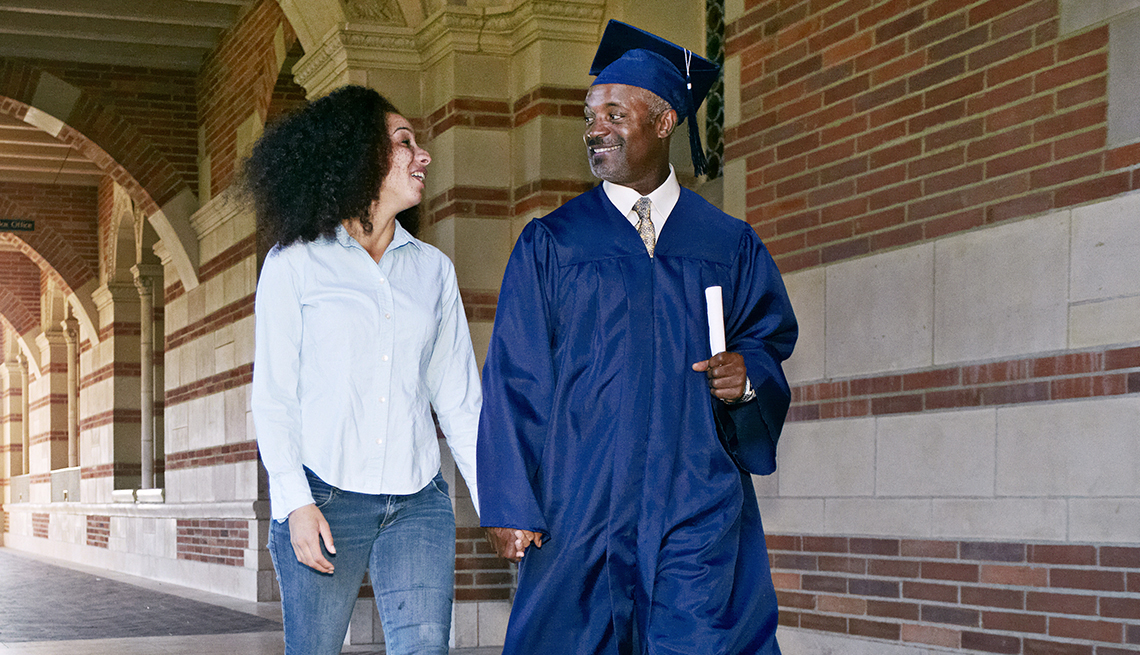 When Shelley Norvell, a 50-something mother of three, considered pivoting from a journalism career to one in psychology, she faced a few roadblocks when trying to go back to college for a second degree.

Beyond the high costs of tuition, one of the biggest hurdles was the university’s stipulation that she take various remedial courses — the same courses those fresh out of high school are required to take. One was a basic English 101 class, a subject the longtime journalist knew well. Thankfully, after a bit of legwork, she found an English department head that said she might be able to have the course waived — so long as Norvell could provide several samples of her writing.

The next day, Norvell delivered four books she had authored to the department head’s office and, after considerable discussion, the class was indeed waived.

Despite the difficulties, going back to college as an older adult is becoming an increasingly appealing option, with more mid-lifers seeking to remain competitive in the job market as they put off retirement. Often, those that do return to college campuses not only change their own lives, but also those of the youth around them. When Mary Spiedel, now 67, realized after 22 years in retail sales that she wanted a job that gave more meaning to her life, she went back to college. Now an adjunct faculty member at Pima Community College in Tucson, Ariz., she gets to teach folks who, like her, decided to go back to school. She says that older students bring “the best life experiences, conversation and expertise” to her classroom.

But what challenges do students over 50 face, and what programs and opportunities exist that cater to their needs and wants, while also encouraging their retention? To answer those questions, we turned to various academic professionals for their best “back to school” tips.

Founded in 1977, the Bernard Osher Foundation has been providing scholarships and support for reentry students for decades, but perhaps its biggest contribution to encore education are its “Osher Lifelong Learning Institutes” (OLLIs) for seasoned adults, currently found on over 120 college campuses. Each institute is unique to its campus, but all seek to offer non-credit courses and experiences on subjects from history to music to current events, and all for students over age 50. And because of the foundation, they’re able to do so affordably, with membership dues at some OLLIs starting at around $100, which includes six-week courses. When Debra Herman started her job as the Director of OLLI at Florida State University seven years ago, they had around 500 student members. That number has since doubled, and Herman is delighted to report that the average age of students is now around 75. “I love their curiosity and enthusiasm, and the fact they’re finally able to study things that they want to study, not what they need to study,” she said. OLLI at FSU even offers intergenerational courses, where its members can take a class and sit alongside college underclassmen 50 years their junior. “Our senior citizens are some of the most mentally stimulated people you’ll meet. Their excitement to learn is never ending,” Herman states. You can find a comprehensive list of OLLI’s here.

2. Setbacks and ‘Academic Rustiness’ Are Common

Eagerly jumping back into the classroom with both feet and feeling ready to learn is one thing, but actually doing it is quite another. Spiedel experienced several setbacks upon retiring to the classroom that she hadn’t anticipated, but that are quite common among people her age. Having had the luxury of only reading recreationally for years, she was unaccustomed to heavy reading requirements. She also realized she had long since forgotten her formal and technical writing skills, as well as library research skills that nowadays include anything but a card catalog. It took a few classes to find her “school legs” again, but once she did, classwork, studying, technology skills and even exams quickly grew easier and more manageable.

3. Your Life and Job Experience May Equal College Credit — But You Have to Ask

One of the more humbling aspects of going back to college (both degree and non-degree seeking) is the fact you may find yourself having to start on the bottom rung of the general education requirement ladder. But that doesn’t always have to be the case, because former job experience and/or military service may “count” as credit. Jennifer Lister is the associate dean of Undergraduate Studies at the University of South Florida (which enjoys a robust number of older students on campus) states that military service and training almost always count, and prospective students should ask advisors about life experience credit. “A department [head] might also waive requirements for students who have certain equivalent experiences, on a case-by-case basis,” she says.

4. Community College Can Be a Great Starting Point

Stepping nervously onto a large university campus that is swarming with 20-somethings may not be a comfortable fit for every older student, which is why sometimes community college can be a better fit. By their very nature, community colleges are smaller and more personal, and their large variety of certification and associate of arts degrees cater well to midlife and career change students, as well as retirees. Denise Savolidis is an academic advisor at Pasco Hernando State College in Wesley Chapel, Fla. She is new to her position, having gone back to school herself at age 50, seeking a change. She found her younger classmates to be “extremely accepting” of folks her age. Savolidis now advises mid-lifers and retirees, knowing full well their challenges. She recommends asking instructors about “testing out” of basic general education courses, and recommends older students take advantage of everything on campus, from sports to student-run organizations and clubs, most of which can benefit from the dependability and leadership of older students. “People going back to school later in life know the value of education,” she says. “We bring a wonderful and different perspective to youthful classrooms that needs to be there.”