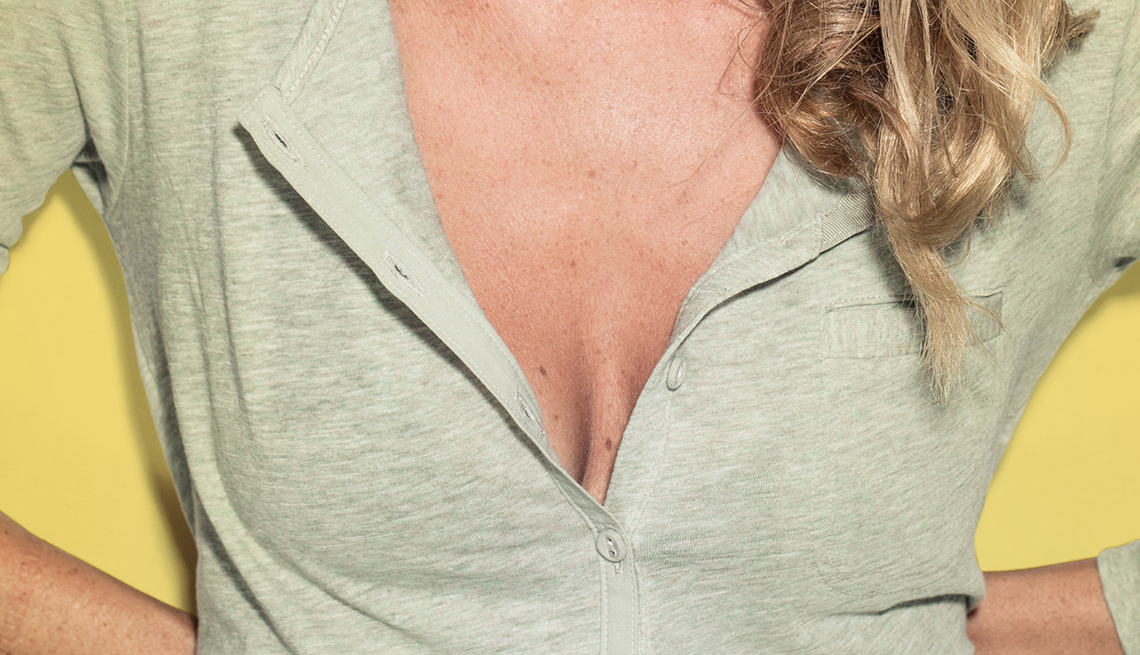 Last summer, around the Fourth of July, Francesca Castagnoli saw fireworks — but not the kind she was hoping for. “I looked down and saw this spray of wrinkles starting in my cleavage and erupting up my chest,” describes the 48-year-old journalist from Montclair, N.J.

Growing up, Castagnoli loved being tan. In her 40s, she became diligent about protecting her face, wearing sunscreen and a hat on the regular. But she neglected her chest, as most of us do. The fallout? Cleavage wrinkles, aka “clinkles” (or its crasser moniker, cougar cleavage). While they may evoke images of Magda in There’s Something About Mary, the truth is that many women entering their 40s are starting to see the results of ignoring the clavicle-to-nipple region.

Most wrinkles are the result of sun damage, but even the most vigilant among us often forget to slather our décolletage with SPF anything before heading out the door. Because chest skin is thinner than the skin on the rest of the body, it’s even more prone to sun damage. Complicating matters, it’s about 10 to 15 times more sensitive than other skin, too, notes dermatologist Samantha Conrad, clinical practice director at Northwestern Memorial Hospital in Chicago, so it doesn’t tolerate aggressive treatments very well.

Large-busted? You might notice vertical lines faster, especially if you're a chronic side-sleeper, Conrad says, as gravity causes a compression-like effect between the breasts.

Still, there are some steps you can take to iron out cleavage wrinkles.

“A wrinkle is a depression in the skin, and we want to bring down the sides of the wrinkles so everything is the same depth,” explains J. Timothy Katzen, a board-certified plastic surgeon and owner of Body by Katzen in Beverly Hills, Las Vegas and Dubai. He says beginner patients can start with a glycolic acid chemical peel. Skin will turn red after application and may feel like it has a deep sunburn, but you can return to work immediately. The acid helps slough out the outermost layers of skin, improving texture but only yielding about a 20 percent reduction in wrinkles, Katzen estimates. (Cost: $250 to $1,000)

Lasers can even things out even more. Katzen likes the Nd:YAG laser for crepey décolletage. (You’ll likely need three treatments, spaced six weeks apart from each other, costing $1,000 to 1,500 per treatment.) Once again, expect a sunburned look; downtime is usually a day. The payoff: an 80 percent reduction in wrinkles.

You could also try the PicoSure laser, says Johanna S. Youner, a certified laser specialist and owner of Park Avenue Laser Treatment in New York City. Often used for tattoo removal, this laser has a faster speed and feels like the snap of a rubber band. It doesn’t get very hot, meaning minimal redness. This one, too, requires multiple treatments; expect three, spaced six weeks apart, for a 65 to 70 percent reduction, with no downtime. ($750 per visit on average)

Another way to attack deeper, discrete lines is to fill up the valleys so that they’re flush with the rest of the skin. That’s what Castagnoli opted for a few years ago when she tackled her chest wrinkles. Her doctor warned her that because chest skin is relatively thin, traditional hyaluronic acid fillers like Restylane and Juvéderm can result in a bumpy-looking texture, and their bluish tint can even show through fair skin. Instead, he suggested Belotero, at the time a newer, colorless, ultra-thin filler that can be massaged and molded, once injected, for a smooth result. After applying a topical anesthetic, her doctor added lidocaine to the syringe full of filler to help prevent burning during injection. “When I walked out, you could barely see the wrinkles,” she says.

Belotero costs about $650 per syringe and should last six months to a year. Newly recommitted to dulling her fireworks display, Castagnoli says she’s planning on creating a “décolletage budget” for 2019, on top of her facial filler budget, as well as investing in a rash guard to wear when she hits the beach with her family.

Conrad recommends microneedling to stimulate collagen production and improve texture. Your dermatologist will use a tool that creates teeny, sterile pinpricks in your skin. As the punctures heal, they encourage the skin to remodel, improving the appearance of wrinkles — but not getting rid of them. (You’ll likely need three treatments, spaced one month apart from each other, costing $1,000 total.)

You heard right. Pillows exist just for your breasts, separating and supporting them so that when you sleep on your side, they don’t smush together. This results in deep morning wrinkles that, over time, can become permanent etchings. Conrad said they may be worth a shot for large-breasted women. Two models on the market include the Intimia Pillow Bra ($34.95) and the Bosom Buddy ($34.95).

Conrad also suggests a multipronged skin care regimen that includes an antioxidant product in the morning and a retrinol-containing one at night. “Antioxidant products provide protection from the free radical damage that occurs as a result of sun exposure, radiation and pollution, helping sunscreens work better,” she says. She likes SkinCeuticals C E Ferulic ($166) or SkinBetter’s Alto Defense Serum ($145).

“Then at night, I like retrinols — they’re like the gentler cousin to tretinoin (Retin A) and don’t need a prescription. She recommends Avène RetrinAL 0.1 Intensive Cream ($70) and AlphaRet Overnight Cream by SkinBetter ($110).

So you’ve got some boobie wrinkles. Grab a turtleneck — they’re back in style. Also, did you know there are now 89 different ways to wear a scarf? A few minutes of meditation may also help you come to peace with your clinkles, seeing them more as a first-world problem than a harbinger of the age apocalypse. Just make sure you lie on your back when you do the meditating (in case you had forgotten the earlier info about side-sleeping).