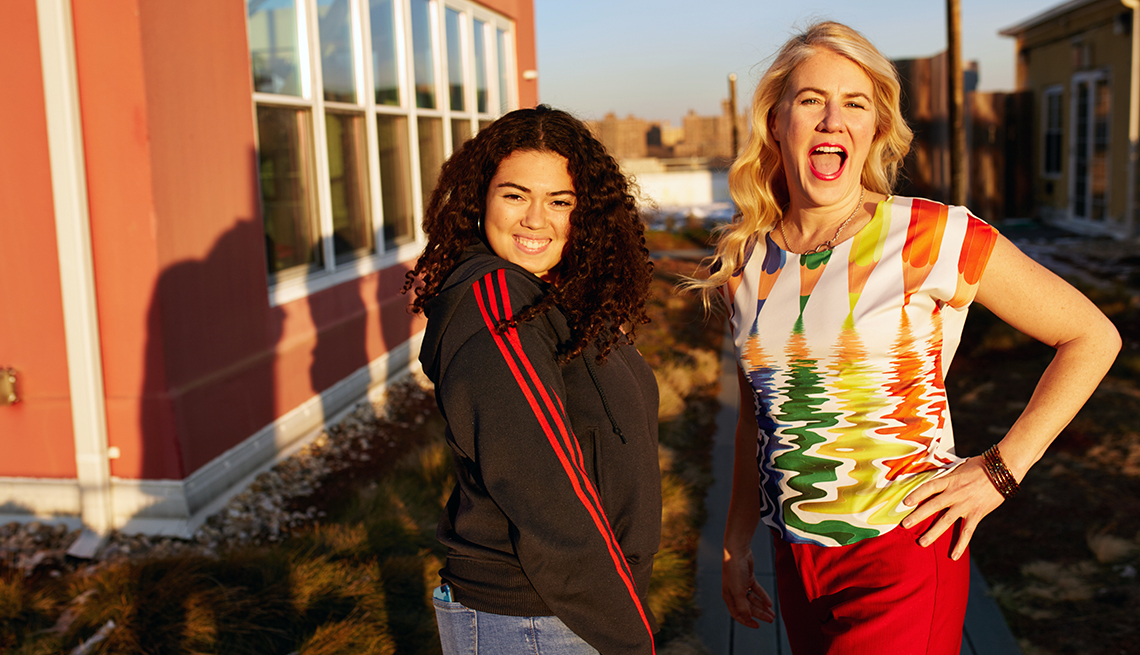 Dylan and Cary, hanging out at their favorite spot in Brooklyn — the roof! Dylan’s 15, but who’s counting?

We all know how important it is to see people for who they are, labels aside. To look past someone’s race, gender, sexuality — even political affiliation — creates understanding and simply just expands your mind. But one important aspect that we all need to see past is often overlooked: age.

For the Youngs:
Look up from your phone. Older people actually start conversations with strangers.

Don’t judge a book by its cover. This is not a fashion play.

Let them have their obsessions. You had Troy Donahue.

Don’t be a curmudgeon. No “Back when I was your age …” phrases.

For both:
Respect each other. Everyone matters. Everyone has a story.

How do you do that? Be sure you have friends that range in age, even by decades. It’s more important than you think. Having a younger friend is more than just finding out who FKA Twigs is. And having an older friend isn’t just about someone buying you booze. An age-differentiated friendship keeps you stimulated, youthful and wise, all at the same time. Below are some perspectives, but what about you? Who is your oldest or youngest friend, and what do you value about this person?

“One of my best friends is old enough to be my mother, but she's certainly not maternal. Her age has given her sarcasm and humor. I love hearing her stories about the past. I never know what to expect, like, we'll pass a bar and she'll say, "That's where Bob Dylan threw up on me." — Laura, 40s

“One of my closest friends is Len. He’s about 85 ­— an actor, he’s gay, and I feel this sort of protective sympathy for him. He lived through a fascinating period of time for a gay man. I learn how to stay optimistic and positive by watching him live his life. I don’t treat him like an old man and he doesn’t treat me like a young one.” — Markus, 28

“My youngest friend is just getting into college. She isn’t wealthy, but got into a great school, and is premed. We came from the same small town (she is my friend’s daughter) and where we are from, doing as well as she is doing is a big deal. I have a lot of stereotypes of her generation. She breaks those stereotypes. She inspires me. — Amanda, 41

“My youngest friend is AJ. He was my nephew by marriage although I am divorced now. AJ is a 16-year-old who doesn't seem like a kid at all — I can never talk down to him, and I learn so much from his insights, his great sense of humor and sophisticated point of view. He is a self-taught guitarist and singer who formed a band when he was only 13, and was booking his own gigs at local venues. He is getting older and is fearlessly outspoken about his beliefs. AJ may not technically be my nephew anymore but I am so happy that he is my friend. — Carl, 47

Dylan was my downstairs neighbor when she was a child. We spent so much time together, tending my garden, jumping on the bed, dressing up in crazy outfits. With Dylan, I got to be sillier than an “adult” and she got to act older than she was. I remember one time we left out a pumpkin in the garden all winter after Halloween. In the spring we found a baby pumpkin had grown inside it! We both screamed. — Cary, 40s

Mike Albo is a writer and performer.