Joan Kron is a force to be reckoned with and has been for over 50 years. Yet, the day I met her, she was over-the-moon thrilled to be mentioned in a piece in the New York Times style section. This elation surprised me — coming from a media icon. Joan cofounded the New York Times home section, was the first fashion reporter for the Wall Street Journal, wrote notorious stories for New York Magazine in its heyday under Clay Felker, was editor of Avenue magazine before becoming a famed columnist for Allure. At last count, she is the author of four books, close to 1,000 articles and has had spectacular success at not one, but three careers. So why the excitement? Here’s why. It was the first time anyone referred to her within an article as “writer and filmmaker.” Another in a long life of firsts for Kron, 89.

Her movie is called “Take My Nose … Please!” and it is making the film circuit, racking up awards and rave reviews. She’s written, directed and produced the documentary — ’cause that’s the kind of woman Joan is. The subject? Plastic surgery — something she knows a lot about as she was in-house expert on all things “lifted” for Allure for 25 years. I was able to spend an afternoon with the gutsy, gorgeous Joan — who never wrote a (published) word until the age of 41 and never made a film until 89. There was much to learn about disrupting aging from Joan Kron. 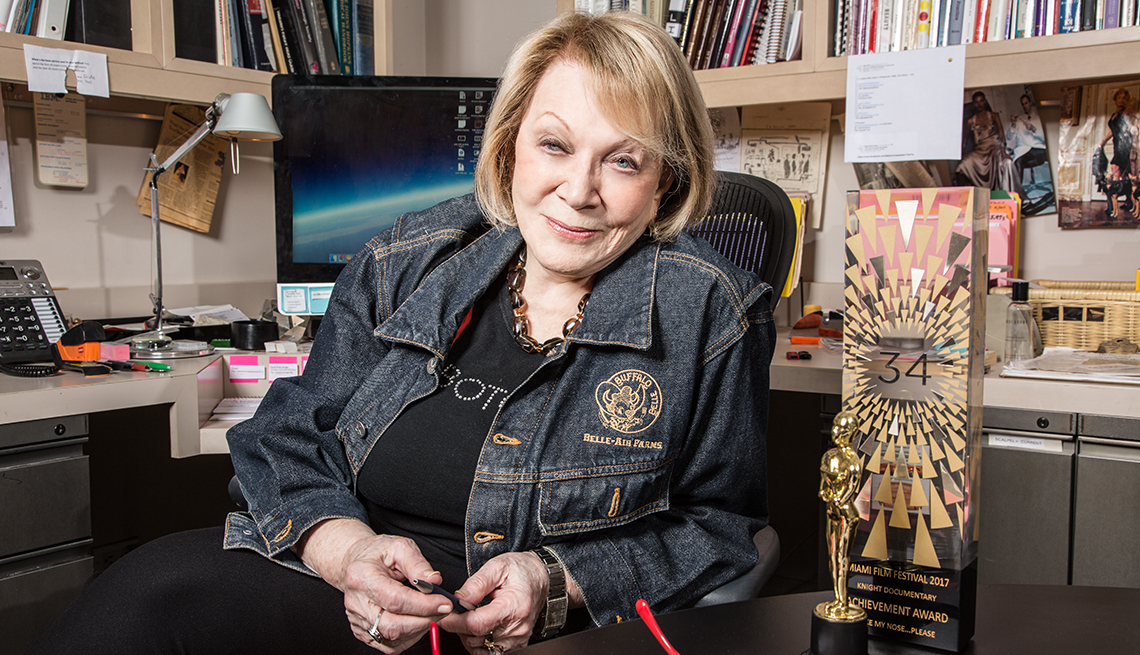 Joan surrounded by her treasures, in particular, the gorgeous Knight Documentary Achievement Award at the 2017 Miami Film Festival. — Spencer Heyfron

What was it about plastic surgery that drew you in?

Plastic surgery is fascinating. It’s the stuff of horror movies, it’s the stuff of science fiction — and transformation. It was the only subject in style that nobody owned and that was badly covered. I’m not interested in the “ain’t it awful” crowd. We have the right to present ourselves anyway we want. And doing this movie I had the same point of view — unbiased.

What is your definition of beauty?

Was there a bias about the movie’s subject when you were looking for investors?

Absolutely! People are on one side of the fence or the other. The question would always be “are you for it or against it” — I would say, neither.

Did you experience age bias when working at Condé Nast?

Here’s my philosophy: In order to stay in the game, you have to be better than good. You have to become an icon. You have to be Iris with her big glasses. And I did become an icon. For 10 years while I was working at the New York Times and New York Magazine I took on subjects that were theoretically not in my department. Many chapters later, I tackled plastic surgery for Allure magazine, where I was respected and listened to…’cause I was an icon.

You seem to have cross-generational appeal … Allure is for young women.

We can’t get trapped in our own generation. We need to understand how the young ones think in order to reach them. On the film, we had an assistant editor who was 25 years old, my head editor was 50, and I’m almost 90. It was a great mix.

What brought you to film at this point in your life?

I was invited to audit a course at SVA (School of Visual Arts). I was 84 and I would schlep downtown through snow, rain, hail, whatever to hear these top documentary filmmakers give talks. I got hooked.

I have another idea brewing. I used to think I would make it a story — but now, why not make it a film? People don’t read any more, or so they tell me. They only want to look at pictures. Fine. I can do that. Just move on.

“Here’s my philosophy: in order to stay in the game, you have to be better than good. You have to become an icon.”

You have reinvented yourself so many times. Where do you get your moxie?

I don’t think of myself as having that much moxie. Until I look back. I married a doctor when I was 22 and gave up a great opportunity to be a costume designer for the Ringling Brothers Circus, my dream at the time. I always think … what would have happened if I had taken that job … I may have married a clown!

So, going into films was a natural evolution

Yes. I got the idea about comedians and plastic surgery because comedians are the only ones who tell the truth … and I tell the truth. Never lie about my age — or my face-lifts. I’ve gone from costume designer, to society art maven to interior decorator, writer and filmmaker — and it’s all been storytelling. 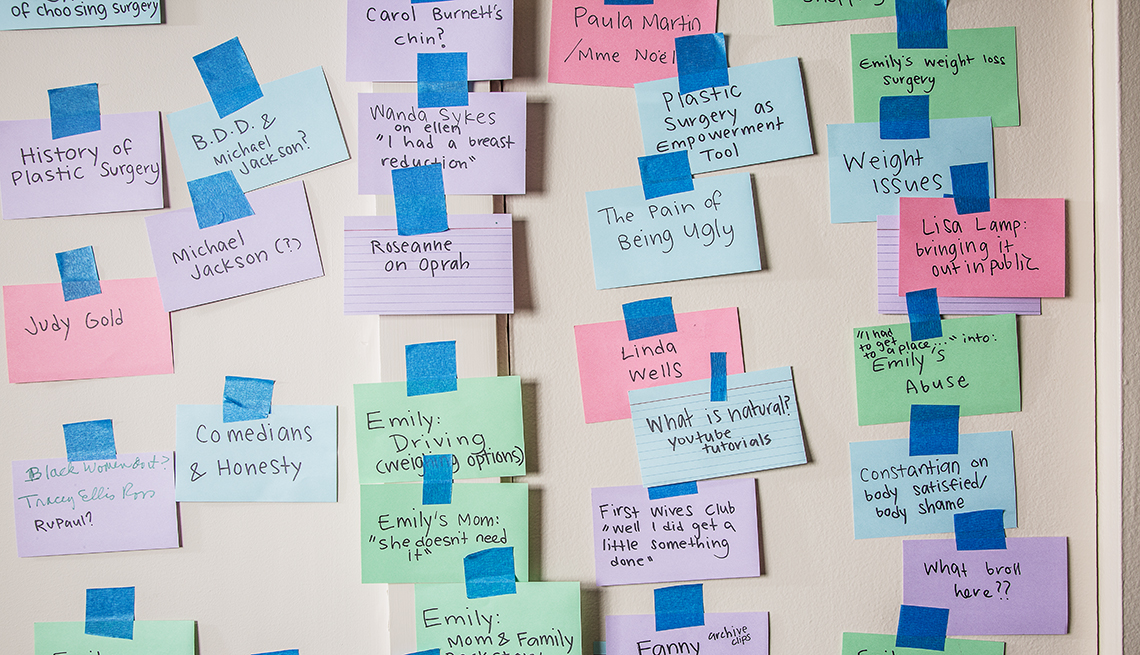 The working project board for “Take My Nose …. Please.” — Spencer Heyfron

What do you love about being 89?

I love the idea that my time is finite. It gives me the energy to not postpone anything. I pick up that phone — today.

Do you have any advice for the younger generation?

Get yourself a good foundation. Build on your strengths. I had a good art foundation, and then went to drama school and thought I had wasted my whole three years at the best drama school in the world, Yale. Now, look. At 89, I am a director of a movie and the producer. So just think big, and watch for unexpected opportunities.

What is the most disruptive advice you have for living a long, happy, productive life?

Follow your star. Do what you want to do. No regrets. I hate people who have regrets in life — though I do have a regret about that damn circus. I need to get over that one.

Maryjane Fahey is the editor of Disrupt Aging