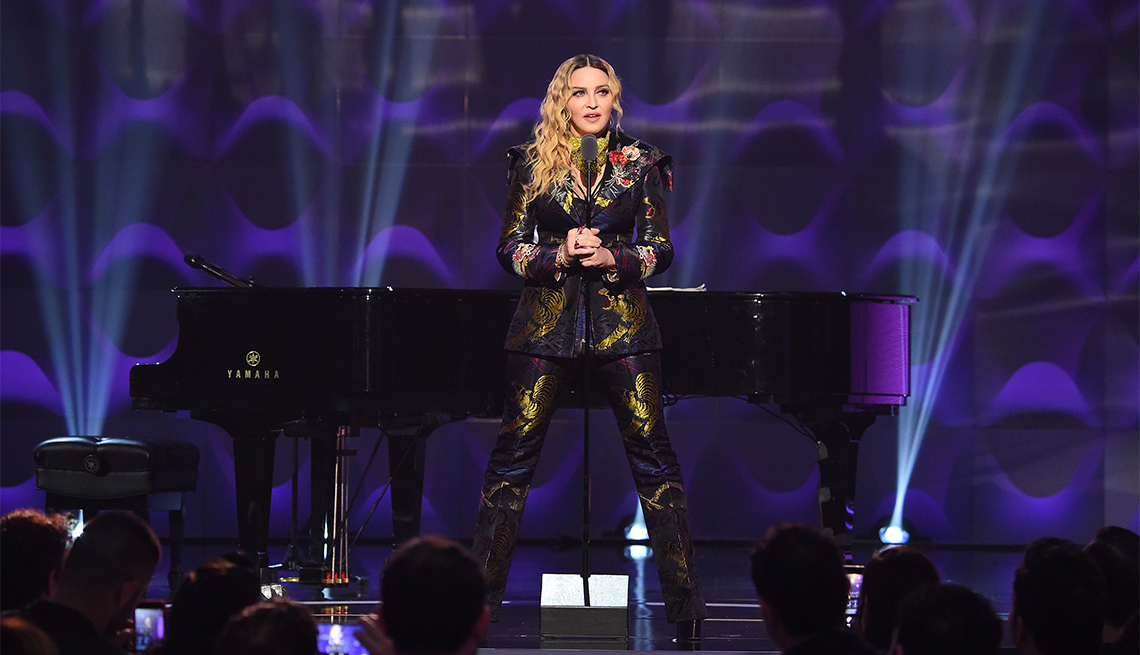 Madonna: taking her power stance at Billboard’s Woman of the Year Award

“I think the most controversial thing I have ever done is to stick around,” said the amorphous pop singer, Madonna, receiving her Woman of the Year Award in New York from Billboard magazine. Clad in more material than usual, she delivered an impassioned speech calling out the abuse she has suffered as a controversial female figure in the music world.

For those of us who thought she was immune to criticism, it was a surprise to find out otherwise. Over the years, nothing in her take-no-prisoners, wear-underwear-as-outwear attitude would give us a clue that she was hurting beneath her sequined Spanx.

It was a confident but more exposed (and not by a Gucci G-string) Madonna than we have seen before.

“I stand before you as a doormat,” she said. “Oh, I mean, as a female entertainer. Thank you for acknowledging my ability to continue my career for 34 years in the face of blatant sexism and misogyny and constant bullying and relentless abuse.” We thought she was immune to the taunting and teasing as she strutted her stuff, flaunting and pleasing.

The entertainer, known more for writhing on her sexy, salivating, male back-up dancers than delivering salves for her soul sisters, took to the mic to lend support to her female friends and fans:

“What I would like to say to all women here today is this: Women have been so oppressed for so long they believe what men have to say about them. They believe they have to back a man to get the job done. And there are some very good men worth backing, but not because they're men — because they're worthy. As women, we have to start appreciating our own worth and each other's worth. Seek out strong women to befriend, to align yourself with, to learn from, to collaborate with, to be inspired by, to support and [be] enlightened by.”

While frequently criticized for not dressing or acting her age, Madonna has turned that back on her detractors. Why can’t a woman a few years from senior discounts wear garter belts and flash her well-toned fanny, make sexual innuendos or date younger men?

“Do not age. Because to age is a sin,” she sneered. It’s been pointed out that she defies it at the same time she succumbs to it, obviously having seen her share of facials and fillers, but she’s a pop star, not the secretary of state. Madonna does not deny her age, she has proudly held her place in the music industry for 34 years, but by standing tall — sometimes in thigh-high boots and fishnets — she disrupts our definition of what a strong daring woman of 58 looks like.

“If you’re a girl, you have to play the game,” she said, as she changed the rules of the game.