Mystery writer Louise Penny becomes a caregiver and prays that when her husband's death comes, she is holding his hand 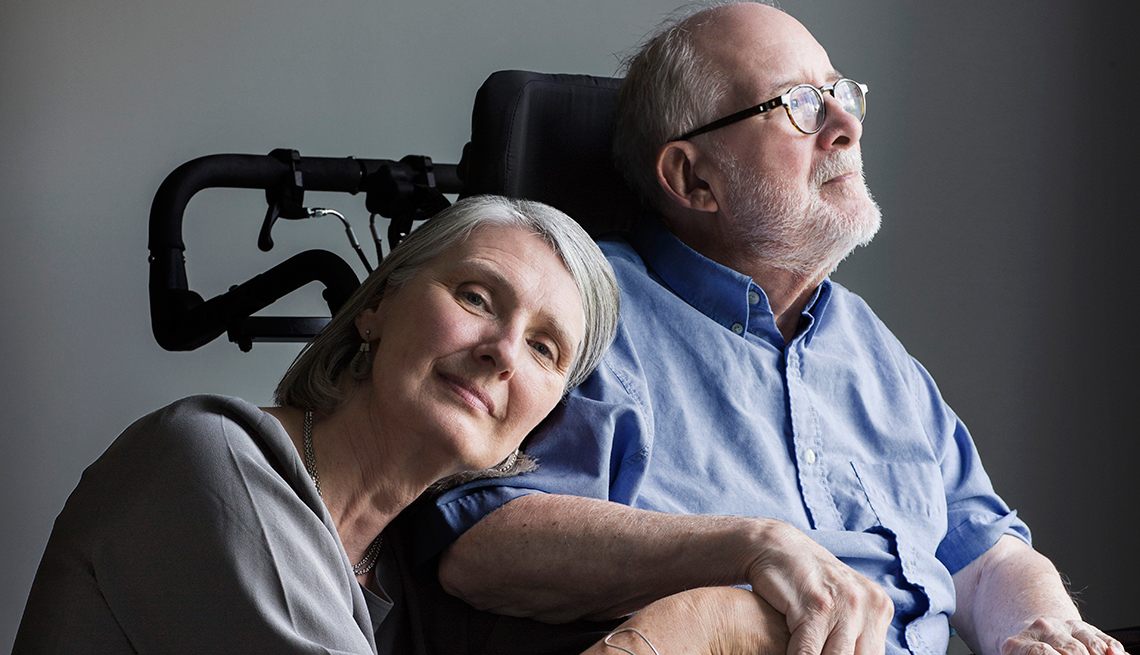 The doctor did not bother with niceties or try to cushion the blow. My husband had dementia. And it seemed to be moving quickly. By then, of course, we knew. I think many families are in the same situation. The medical diagnosis just confirms what we live and see every day.

I looked at Michael. His dear face, his clear blue eyes. This man who, as a pediatric hematologist, had held the hands of dreadfully ill and dying children, nodded.

I took his hand and held it as the doctor went through the options. It didn't take long. There were none.

On the drive home, I promised that he would never be left behind or left out. If I went somewhere, he would go, too. It was the first of a number of promises that would be broken.

I think the first year might have been the most difficult, as big pieces of him fell away. As the blank looks grew longer. As the silences stretched out.

Every morning I would write up a series of tests, which I called games, because that was less painful. Math, mostly. And conversions of currencies. And some memory tests. Showing him objects, then taking them away and asking him to remember. Of course, at least half the time, I couldn't remember them.

He was very patient. Perhaps even amused.

My day was prescribed by how well Michael did on those tests. If he did well, I was relieved and happy. If he did badly, I was anxious and stressed.

I remember my impatience, my annoyance verging on anger, when one day he couldn't figure out how to do long division. The day before he did it fine. And now …

He was a scientist. A full professor of medicine, a doctor with an international reputation. And now, he couldn't divide 2 into 20. And then he couldn't copy a triangle. Or write a full sentence. Or tie his shoes.

We sold our lovely home because he was having trouble walking, and stairs were not only difficult, they were a danger. I say "we," but the decision was mine.

I didn't ask him, didn't consult him, for fear he'd say no.

It was one of the things I'd promised Michael — that we would stay there. And I tried. But we just couldn't.

So we moved into a condo. All on one level. Underground parking. Elevator. It was, astonishingly, sheer bliss.

Suddenly everything that had been a struggle was easier.

And all the loneliness that came from isolation in that glorious rambling house in the countryside went away. We were in a village. With neighbors. With friends who'd drop by. With caregivers right there.

And I learned that, far from having my day, my happiness, decided by how Michael was doing, I needed to make it about how I was doing. How well I was accepting, adjusting and looking ahead. Seeing issues before they arose.

I'd been desperately trying to keep our lives normal. But there was a new normal, and it changed every day. If I didn't change with it, that was my fault. Not Michael's.

And I needed to understand that, as frustrating as it sometimes was, Michael was not doing any of this on purpose. None of it was his choice. I was the only one with a choice.

I asked for help. Brought in caregivers. Set up massages three times a week for Michael. And yoga classes with friends once a week in our condo, for me. We threw a housewarming party, a Christmas party, a party for Michael's 82nd birthday. Packed with people. All of whom knelt down to talk with Michael, who smiled the whole time.

Michael can no longer walk. He's in a wheelchair and needs a lift to get out of bed. He needs to be cleaned and dressed and fed.

But he remains what he always was. The happiest man in any room.

And I've found no small measure of happiness, too. And gratitude. That I'm younger than he is, and have the strength and energy to care for him. That we have such great friends. That I work from home. That we have the resources to look after him.

We get to live our lives fully, right to the end. Of course, our idea of "fully" has evolved, too.

Our lives are full of kindness, of friendship, of love. There is clarity now, and simplicity. He rarely speaks and no longer knows my name. I think he smiles more broadly when he sees me, but it's possible that my well of wishful thinking hasn't quite run dry.

I now set the alarm for 5 a.m. and write until 10. The rest of the day is his. Caregivers come in every day, and that gives me a break to see friends, to read or watch TV. To go for walks. Or nap. Or eat gummy bears in the garden. Every morning and every evening, when we're alone, I whisper in Michael's ear. That he is magnificent. He is brave. He is handsome and brilliant and kind. That I am so happy to be his wife. I tell him that he is safe and he is loved. And he smiles.

Michael is not in pain. He is not anxious or afraid. I am, sometimes, but he is not.

I cry, a lot. I miss him so much. The companionship, the ease. The thoughtful conversations. I miss someone to travel with and have dinners out with. Someone to discuss the day with.

I miss the deep hugs.

I miss being loved.

I am often lonely, and exhausted, and feel not quite adequate. I want it to be over. And dread the day that it is.

Sometimes I can't recall what Michael was like, before.

I can look at photos of him and smile, but the sight of his handwriting reduces me to tears.

Most of the time, though, I am content. At peace. Finally. The war relinquished. A friend put it so beautifully. Michael is simply losing altitude.

I have promised myself that when he touches down, he'll be at home. Here. With me, holding his hand.

Please, dear Lord, let that be one last promise I can keep.