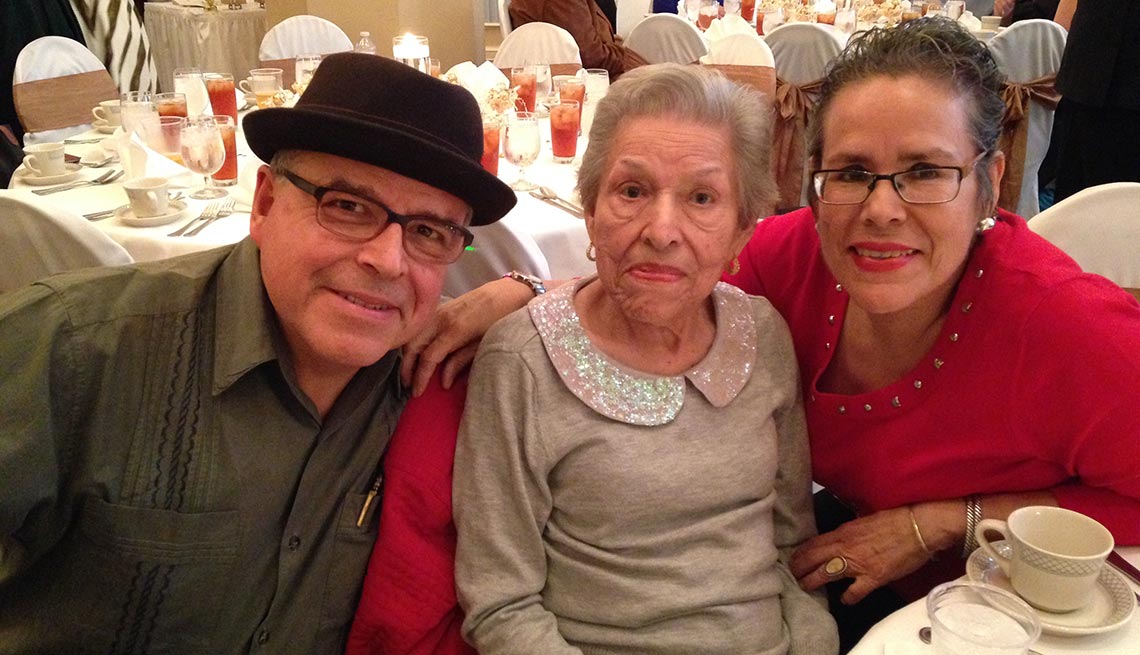 En español | Mom and I are four months into our new reality, and I'm still not sure who feels more traumatized — she or I. After six years of living with me, she recently moved into a "home." She's 97 and has Alzheimer's disease.

My journey as a caregiver began unexpectedly. Our parents always told my brother and me that they didn't expect us to care for them in their old age. But that changed in 2008, when Mom and Dad moved from San Antonio into an independent-living apartment in Los Angeles to be near me.

My mom started exhibiting some memory loss, but that was easy to chalk up to aging (she was 90 at the time). A year later she was officially diagnosed with Alzheimer's. As her memory loss became more severe and her behavior increasingly difficult, it became clear that my dad needed help. I took the next logical step and invited my parents to come and live with me.

The timing was almost perfect. I had just lost my job due to a reorganization at the university where I worked, but my experience as a freelance writer made me confident that I could work at home. I respected that my older brother had a high-powered job in Washington, D.C., so it didn't make sense for him to jump in. I knew he'd be there if and when we needed him.

I was now officially a caregiver.

In the beginning, I slipped easily into the role. Keeping house and managing my parents' affairs was doable, and my dad and I were an effective tag team. I was able to write, continue to host a popular salsa show on public radio, go out dancing, travel a bit and meet with my book club.

That all ended in February 2015, when my dad, at age 95, had a heart attack. One minute he was with us, the next, he wasn't. The days following his death passed in a blur. But a sense of dread was building in my heart.

Sitting one evening with my brother, who had come to be with us, I blurted out, "I'm afraid of being alone with Mom."

I could tell right away that he didn't know what I meant, and, at that moment, I couldn't express myself clearly. My brother, who visited as often as he could, had experienced my mother's difficult behavior, but dealing with it for a few days at a time was not the same as living with it 24/7. Plus, she sometimes acted differently when other people were around.

When it was just the two of us, she might spend all her waking hours worrying and asking questions. When was she going home? Where was her husband? Why couldn't she call her sister and mother (also deceased)? When I couldn't come up with a creative answer that satisfied her — because the truth only upset her — her agitation would verge on hysteria. And did I mention her late-night hallucinations?

The only way to calm her was to find ways to redirect her attention, which I had to do constantly: What games would engage her mind? What outings could we go on? What things could we talk about that would distract her?

Leaving her alone was no longer an option, nor was working. Any kind of social life I had managed to maintain soon vanished. I felt my life was over.

Eventually, I found a lovely woman to help me, and together we fashioned a world centered on keeping my mother's agitation at bay. It was a constant struggle, and sometimes we failed miserably. Too many times my mother ended up pacing from room to room, frantic in her search for a phone to call her mother. Countless were the times we stayed up until all hours because she had to wait up for my dad.

She could be wonderful, as well, as her dignity and appreciation of beauty remain intact. She still loves to smell the roses — literally. Babies and puppies always make her smile. And when there is company around, her social graces bloom; you'd be unlikely to guess that she suffered from Alzheimer's. She certainly doesn't know.

But after almost a year, life with Mom, like a not-so-silent thief, had robbed me of my identity. Gone was the writing, dancing, traveling, enjoying-times-with-friends Kathy. I was physically and mentally exhausted, and had reached my breaking point.

I started thinking about placing her in a facility. Just the thought of it filled me with feelings of failure and guilt. Wasn't it my duty to keep her at home? What would Dad say? Was I letting him down?

Luck was with me. Certain things fell into place. A support group I'd been attending helped me understand that it was OK to find a place for my mom. It provided the resources to educate myself on what our choices were and to find her a safe place. My brother supported me; cousins who had been through a similar experience with their mother encouraged me.

Mom's now in a wonderful place dedicated to caring for people with Alzheimer's and other forms of dementia. She receives excellent and compassionate care. But the first weeks at her new residence were scary and frustrating for her. She was disoriented and acted out terribly. I had a previously planned trip, so I was away during that period, and for that —and the caring, patient staff — I'm grateful.

While Mom settled in, I found myself struggling to become Kathy again. I had falsely believed that I could resume my life where I had left it. Friends and family kept asking what I was doing with all my "freedom."

Freedom? The truth is that the first couple of months by myself were disconcerting. At night I was still hyperalert, listening to every sound coming from my mother's room. The house was filled with reminders of her — and my dad, whose death I realized I had not really had time to mourn. Her clothes still hung in her closet; her games still sat in a box in the dining room. Day after day I collapsed on my couch, watching hour after hour of meaningless television. The sense of loss was overwhelming.

Four months in, I'm slowly regaining my identity. But it's come in stages. I had to remind myself of what I enjoyed doing and start reconnecting with friends who had gotten used to my being unavailable. It's taken me a while to realize I can go where I want when I want — and to give myself permission to live my life again and not feel guilty.

Of course, my caregiving isn't over. I have to remain vigilant about my mom's care. I visit her often, manage her health care, plan outings and encourage family and friends to remember her.

She has become more comfortable in her new home and is always happy to see me — she knows my name and usually remembers I am her daughter (on occasion, I'm her niece) — but she still asks about Dad and when she can go home.

Those moments hurt. I suppose they always will.

So the journey continues. I can be Kathy again, but I will be my mom's champion as long as she lives.

Katharine A. Díaz is a writer and coauthor of the cookbook Sabores Yucatecos: A Culinary Tour of the Yucatán. She also hosts the music show Canto Tropical on KPFK in Los Angeles.