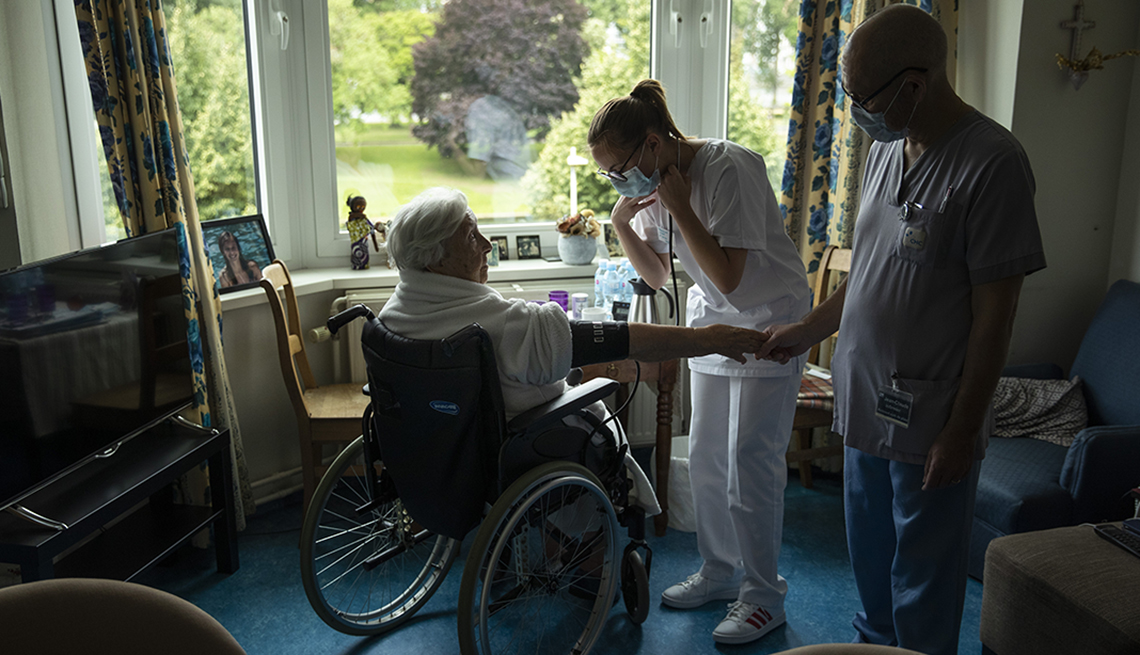 En español | Nursing homes continue to be hot spots for COVID-19, especially as cases increase in the South and West.

Both residents and staff are at high risk for infection and death. Even now, 44 percent of all virus-caused deaths, or more than 56,000 deaths in all, have occurred in long-term care facilities, according to a July 13 report from the nonprofit Kaiser Family Foundation. And that doesn't account for four states — Alaska, Hawaii, Montana and South Dakota — that haven't reported nursing home deaths. 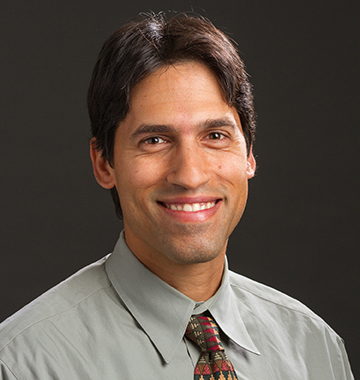 As COVID-19 swept across New England, Sunil Parikh, M.D., has played a rare dual role in aiding both the ailing residents and worried managers of Connecticut's nursing homes.

Parikh, an infectious diseases physician at the Yale School of Medicine, helped colleagues at Yale New Haven Hospital review the cases of a flood of patients from nursing homes. Then he became part of the weekly calls state health officials led, counseling facilities on navigating COVID-19. He noticed that both his hospital and nursing homes faced similar challenges, such as shortages of masks and gowns.

"But there was this disconnect between the two groups,” said Parikh, also an associate professor of epidemiology at the Yale School of Public Health. If the nursing homes had sufficient testing, gear and other tools, they could keep more residents healthy and ease the crush on overburdened hospitals, he concluded.

Nursing homes need to be able to test all residents and staff even if they aren't showing symptoms. That would be expensive, and Parikh said state and federal governments likely would have to share the cost.

"I feel this aggressive approach is needed given how explosive and devastating COVID-19 can be in these settings,” he says. “The downstream effects would be huge."

But a full-scale “second wave” could arrive as early as mid-September, a specter that is troubling to experts and advocates. They urge that steps be taken now to curb the number of future deaths, and in interviews they recommend seven staffing policies that they say could protect residents and staff.

"There are certain things that would cost more to do, but the real cost is loss of life for the failure to do things,” says Elaine Ryan, AARP vice president for state advocacy and strategy integration. AARP is urging Congress to require COVID-19 testing of staff and residents, provide personal protective equipment (PPE) to staff and have enough staff to meet residents’ needs.

Several sources mentioned the story of a small assisted living facility in Bristol, Connecticut. In mid-March, Tyson Belanger, owner of Shady Oaks Assisted Living, brought 22 staff members to live on-site full time to prevent them from carrying in the virus as they went about their lives in the community between Hartford and Waterbury.

The last live-in staff members left after 70 days, and the home had no coronavirus cases, he said in a telephone interview. As of July 7, the facility continued to have no cases, according to a report from the Connecticut Department of Public Health.

This won't work for most places — Belanger spent about $250,000 of his own money on payroll and supplies — but Belanger's experience shows how employees play a key role in the health of residents in long-term care. To date, 1,071 cases and 371 deaths have been reported among Connecticut assisted living residents; 8,850 cases and 2,755 deaths among the state's nursing home patients.

"Research shows the prevalence of COVID-19 in skilled nursing facilities is correlated to the COVID-19 rate in the community, the size of the facility, and proximity to an urban area, but not staffing ratios or other quality metrics,” officials at the American Health Care Association, the largest nursing home trade group, wrote in response to staffing questions from AARP. “So the more a surrounding community has COVID-19 in the general population, especially in densely populated communities, the more it is likely to end up in a nursing home."

Here are seven practical changes that can protect staff members and improve their working conditions.

Workers should be paid more so they need to work only one job to make ends meet, say several experts, including Sal Rosselli, president of the California-based National Union of Healthcare Workers. The need to work at two or three places to equal full-time pay potentially spreads the virus.

Many nursing homes do not give staffers a paid day off when they're sick. So ailing employees may feel financial pressure to work.

This year's Families First Coronavirus Response Act, which requires certain employers to provide workers with up to 80 hours of sick leave at their regular pay rate and up to 80 more hours at two-thirds pay related to COVID-19, allows “health care providers,” including nursing homes, to opt out. Also part of the law that exempts health care providers: up to 10 weeks of family and medical leave at two-thirds pay.

New York enacted a more expansive state law in March that includes health care workers. Colorado officials also adopted an emergency rule the same month that includes nursing home staffers. Those provisions are in addition to laws in 12 states and the District of Columbia that offer paid sick leave to many employee groups, according to the National Conference of State Legislatures.

Although those recovering from COVID-19 are supposed to stay home until they're free of symptoms — no fever, no cough — for 72 hours, they may decide to return early when it's unclear whether they're still contagious. Rep. Jan Schakowsky, D-Ill., has proposed a bill requiring at least two weeks of paid sick leave for nursing home workers.

A federal law enacted in 1990 requires facilities to have a registered nurse working eight consecutive hours daily, and licensed nurses on hand 24 hours a day. Stricter rules are needed, Charlene Harrington, professor emerita of sociology and nursing at the University of California, San Francisco, said via email.

She recommends at least one registered nurse on duty during the day for every 28 residents during the day shift, for every 30 residents in the evening and for 40 residents at night. And a June study in the Journal of the American Geriatrics Society found that among homes with at least one confirmed virus case, every 20-minute increase in registered nurse staffing was tied to 22 percent fewer confirmed cases.

"Without PPE, you lose the battle,” says Michael Wasserman, M.D., president of the California Association of Long Term Care Medicine. He thinks nursing home staff should be given N95 masks. “Here we are 31/2 months into it. Why aren't we ramped up?"

Some nursing home representatives fault the federal government for favoring hospitals over seniors in distributing equipment in the spring, and they fear a repeat is looming. News reports indicate that protective gear is again in short supply.

"Months into the crisis, it is pitiful that aging services providers are still scrounging for PPE,” Katie Smith Sloan, president of the trade group Leading Age, said in a statement that criticized the Federal Emergency Management Agency for “scattershot delivery with varying amounts of ragtag supplies."

The methodology of nursing home testing can be hit-or-miss, with testing frequency varying among facilities. States have widely different approaches, with Arizona and Kentucky testing residents and staffs at all homes, while other states simply promote testing or provide guidelines, according to a June report from the federal Centers for Medicare and Medicaid Services (CMS).

Testing all residents and staff just once at all U.S. nursing homes would cost $440 million, according to the American Health Care Association and National Center of Assisted Living (AHCA/NCALO).

The group is praising CMS for its July 14 announcement that it will provide rapid testing devices for residents and staff in nursing homes in COVID-19 hot spots nationwide. However, such rapid tests can have a higher rate of false negatives than the more common, slower tests.

Ideally, residents and staff should be tested frequently. In-Detroit, repeated blanket testing of all staffers and residents — even those without symptoms — in 12 nursing homes found a drop in positive cases from 35 percent to 18 percent, according to a July 10 report from the federal Centers for Disease Control and Prevention (CDC).

Such specialists in nursing homes are often registered nurses with additional training. Among their many tasks are making sure workers wash their hands and that rooms are kept clean.

Every home needs such a specialist on-site Richard Mollot, executive director of the New York City-based Long Term Care Community Coalition, wrote in an email. But federal officials have proposed weakening the mandate for such a position.

Many nursing home workers do not have the time or money to improve their skills. In New Jersey, a consultant's report endorsed by the governor's office calls for strengthening staff training rules and opportunities.

It urges seeking state and federal money to create a career development program for recruiting and training workers. In New Jersey, as of July 15, 6,754 residents and 119 employees at long-term care facilities have died from COVID-19.

"When we get through this, we need to have a national discussion about a lot of aspects of our public health care system and how we support providers and patients alike,” American Health Care Association officials said. “We suspect there will be many changes and lessons learned throughout the entire health care system, not just long-term care."

More on Coronavirus and Nursing Homes