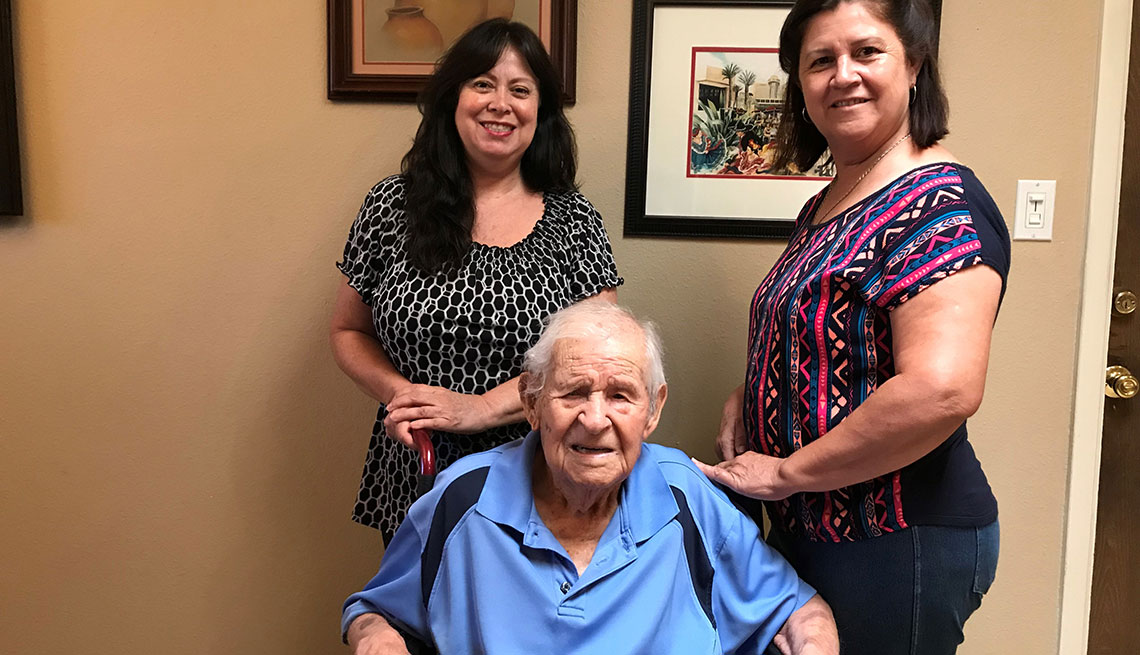 Elias Contreras, 103, with his daughter, Ana, (left) and niece, Teresa.

En español | Ana Contreras always knew she would be caring for her father, 103 years old and suffering from congestive heart failure. She even wrote a poem about it 15 years earlier: “Now it's our turn …” was its steady refrain.

She also knew that she would not allow her dad, Elias Contreras, to suffer and die the way her mother, Susana Contreras, had — in a hospital.

However, having her father in hospice never was part of the plan. “When I heard the word ‘hospice,’ it was like hearing the word ‘cancer,’ “ says Contreras, 56, who lives in the Phoenix area.

She had bristled at the doctor's suggestion that her dad be put in hospice. “To me, hospice meant sending your parents someplace where they were supposed to be taken care of, but sometimes they weren't."

Such misconceptions or even a lack of awareness about hospice is common in the Hispanic community. The concept of hospice is unfamiliar in Latin America, where traditionally most families care for their loved ones at home.

In-home support from doctors, nurses, nurse's aides or social workers is rarely, if ever, available. But in the United States, hospice provides those services.

"Latinos often think they're giving up on their [loved one's] medical care, and that's not the case,” says Jon Radulovic, vice president of communications at the National Hospice and Palliative Care Organization in Alexandria, Virginia. “You're not abandoning your loved one.

A look at the numbers

A little more than half of all Medicare beneficiaries who died in 2017 used hospice services, up from almost 23 percent in 2000. The rate among Hispanic Medicare patients who died:

"It's not giving up,” he says. “It's bringing a holistic, compassionate form of health care focused on dignity and the patient's wishes.”

About 2 percent of all hospice patients in 2017 were Latino, according to an October 2019 Government Accountability Office report. The overwhelming majority of beneficiaries were non-Hispanic white.

Yet the percentage of U.S. Latinos who have used hospice services is growing.

About 1 in 5 Hispanics on Medicare who died in 2000 were in a hospice program. By 2017, that rate had more than doubled, a higher rate than for African Americans and second only to those who identify as white, according to the Medicare Payment Advisory Commission, a congressional agency that advises lawmakers.

As more Hispanics experience hospice's holistic approach to care, Radulovic adds, they're more likely to tell friends and family not to be afraid of it, and acceptance will continue to grow. That has been Ana Contreras’ experience.

“If we didn't have hospice, I don't know if we could have done all this,” she said just 3 1/2 weeks after her father entered the support program for those who are terminally ill and their families. The Spanish-speaking hospice nurse was able to communicate directly with Elias Contreras.

Without the male certified nurse's aide, Contreras says that bathing her father would have been impossible. The hospice team taught her how to move him to avoid bedsores and to get him safely from bed to wheelchair.

In fact, hospice provided the hospital bed, incontinence products, lotions, medications and oxygen tank, she says. Medicare covers everything needed for terminally ill patients as long as it's from a Medicare-approved hospice provider.

"You can still take care of your parents but have hospice help you,” Contreras says. “They're not taking anything away from that.”

"Hospice,” often translated into Spanish as “hospicio,” can carry the negative connotation of institutionalizing a loved one, says community liaison Suzanne Sanchez of Hospice of the Valley, a not-for-profit organization in Phoenix. While her organization has a bilingual and bicultural staff dedicated to serving Spanish-speaking patients, it doesn't translate the word.

"Hospice is a philosophy of care, and it's hard to define a philosophy and translate it to our community,” Sanchez says. “We don't focus on the word but on the feeling."

Contreras wasn't feeling the philosophy when a hospice team first came to her father's hospital room to explain the program. She walked out.

"I was so angry,” she says. An argument with her sister, who insisted she couldn't take care of her father at home alone, ensued in the hospital hallway.

The second time a team member came to talk, Contreras decided to listen. She agreed to visit one of Hospice of the Valley's inpatient hospice homes.

But she still had questions:

Elias ended up spending only one day in inpatient hospice care. The family visited and the staff was wonderful. It was not dark and gloomy but the opposite, his daughter says.

"But I decided to bring him home because I wanted the time left with my father to be at home,” Contreras says. “Without him there, I was going to come home, but it wouldn't feel the same anymore. I wanted those last moments.”

Elias awakened with a hoarse cough that was heard from the kitchen. Contreras’ cousin, who had come from Mexico to help, went to check on him, returned and started cooking eggs on the stovetop.

After breakfast, Contreras’ cousin rolled her uncle into the kitchen. His white hair was patted down and his lap covered with a patterned blanket. He looked at me, not seeing a visiting reporter, but a long-lost family friend instead.

"I knew you when you were this big,” he told me in Spanish, holding up his thumb and forefinger 2 inches apart. “Do you remember? You're all grown up now.”

‘If we didn’t have hospice, I don’t know if we could have done all this.’

Born in Texas, Elias Contreras grew up in Jalisco, Mexico, about 700 miles south of El Paso. Jalisco is where he met and married his wife, Susana; they raised nine children.

At this moment, I imagined his thoughts must be filling with family memories. Our fingers intertwined in a handshake. The power of his grip astounded me. He won't let go.

A bit later, Contreras pried her father's fingers from mine and wheeled him to the living room, where she and her cousin placed him gently on the sofa.

As I drove away, I recalled tender moments, tough times, extraordinary love, laughter, joy and, ultimately, the sadness and gratitude of taking care of my own parents. Mom, Dad and our entire family were given the gift of hospice 10 years ago.

But at that moment, the gift belonged to Ana Contreras, her family and her father.