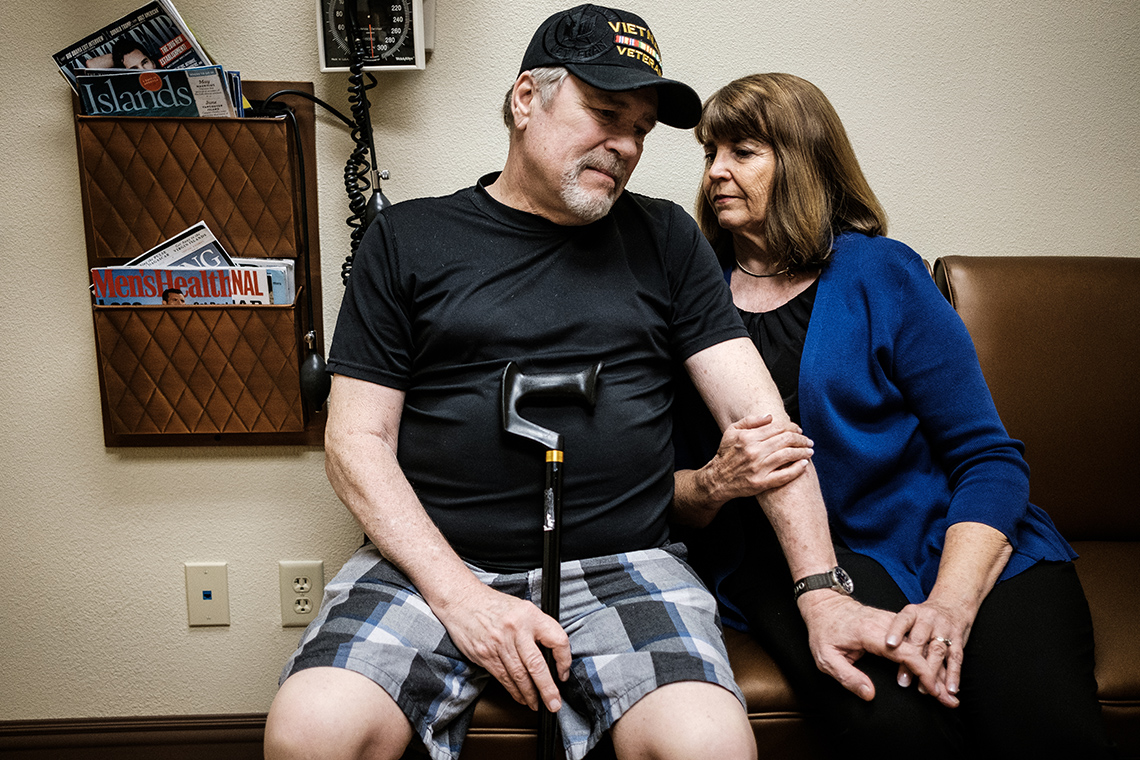 Randy Sprague joined the Navy at 19, volunteered for Vietnam and served two tours. The war came home with him and laid dormant for more than 30 years. Now he struggles with post-traumatic stress as well as diabetes and nerve damage in his legs, both linked to exposure to Agent Orange, a defoliant used to clear dense jungle in Vietnam. Back surgery three years ago has left him nearly bedridden with pain. For almost every need, he relies on his wife, Debbie.

“She does everything for me,” Randy says. “She’s been taking care of me day and night.” 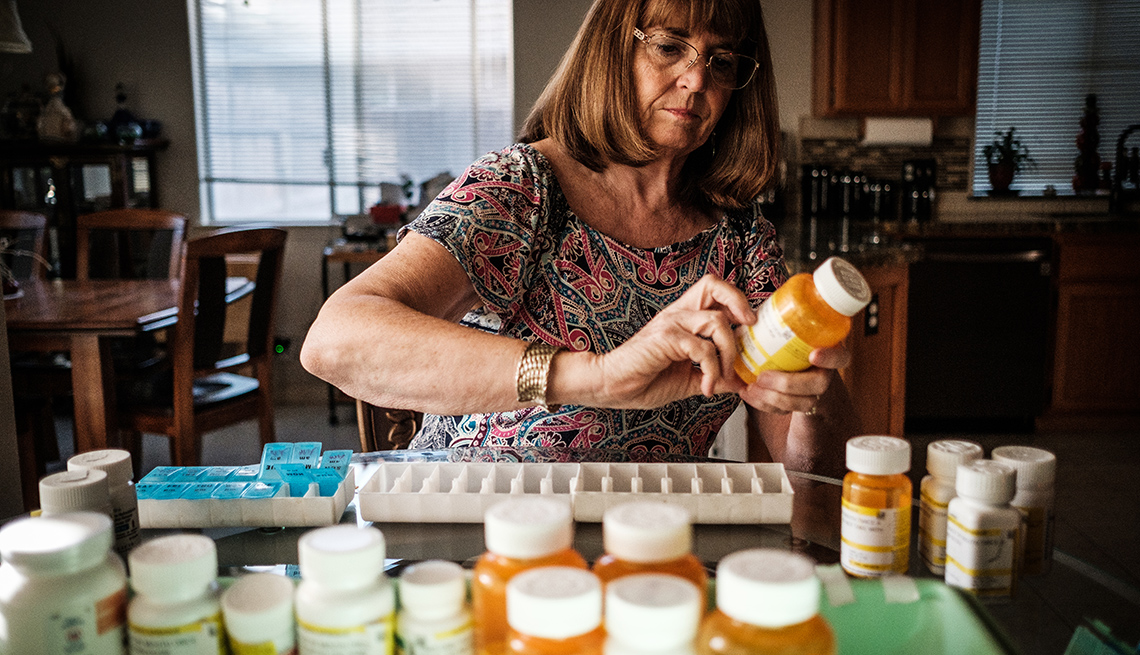 Caregiving dominates Debbie Sprague’s waking hours. She helps Randy, 70, from bed in their Redding, Calif., home, prepares his insulin, checks his blood pressure and doles out 20-plus medications. She schedules and accompanies him to his medical appointments, sometimes several a week. Over one recent week, she spent 12 hours on the phone bouncing between Department of Veterans Affairs (VA) staff and medical providers to arrange an upcoming surgery to control his back pain. She spends an average of 10 hours a week helping Randy navigate paperwork related to his care. Add to that all the daily chores. “One hundred percent of the household duties fall on me,” she says. 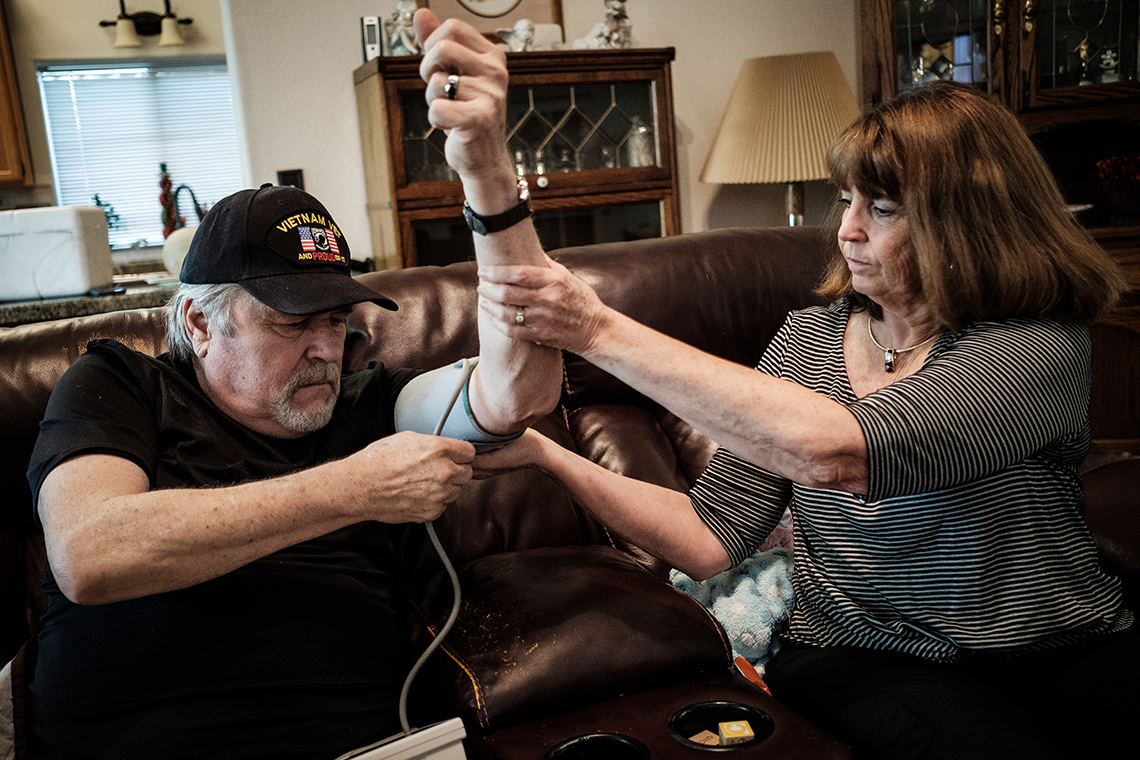 Sprague is far from alone. More than 5 million Americans care for an injured, sick or disabled military veteran — 80 percent of whom served before the Sept. 11, 2001, terror attacks. That number will grow as the Americans who served during the Vietnam era age. About half of military caregivers are older than 55, and the support they provide is critical. Half of the veterans would require a skilled nursing home or assisted living facility if their family caregiver were no longer available, and another quarter say that would be necessary in the future, according to a 2017 survey by Disabled American Veterans (DAV).

“Caregivers have been burning the candle at both ends,” says Adrian Atizado, who works on health policy and advocacy for DAV. “They’re getting old, and they’re having their own health problems. They’re feeling put in the situation of saying, ‘I can’t do this anymore.’ They’re asking for a little bit of help so they can keep their veteran at home a little longer.”

Caregivers to veterans injured since 9/11 are entitled to special stipends, health coverage, medical training and 30 days a year of respite care to give them a break. Those same comprehensive benefits don’t extend to caregivers like Sprague. Yet older veterans are more likely to need help with daily activities, their caregivers face increased health issues and financial strains, and they are often caring for elderly parents or other family members, which can compound the stressors. 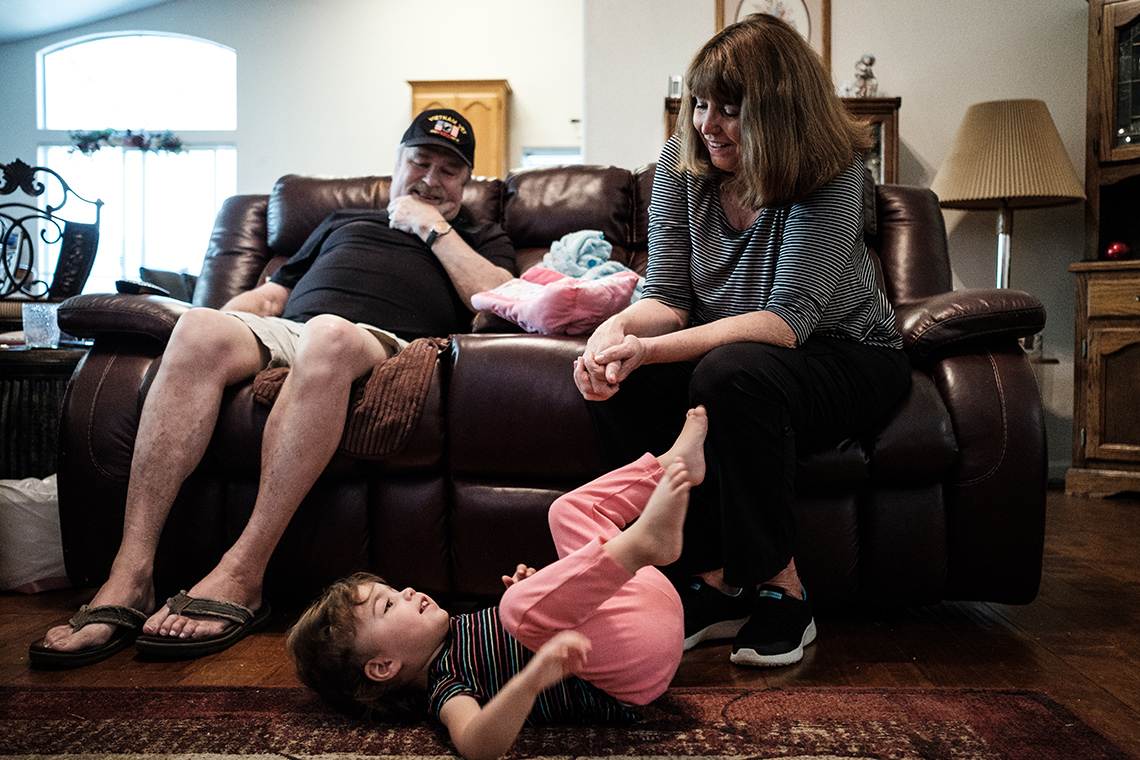 Randy recovers after going on a short walk with his wife and granddaughter at their home in Redding, California.

The wars in Afghanistan and Iraq introduced a new generation of Americans to a timeless and searing reality: Combat can ravage minds and bodies with wounds that last long after the service member has returned home. As the wars stretched on and the ranks of wounded grew, lawmakers wanted to ease the burden on family members caring for veterans with mental trauma, amputations and traumatic brain injuries. The initial caregiver legislation was intended to cover all veterans, but to trim costs, lawmakers limited eligibility to post-9/11 veterans shortly before the bill passed in 2010, Atizado says. “There was an agreement that Congress would come back and expand it,” he says. “We’ve been fighting for the past seven years for Congress to make good on that.”

The Rand Corp. estimates that about a third of pre-9/11 military caregivers would be eligible for the benefits. The rest may not qualify because the veterans’ injuries don’t significantly limit their daily activities or weren’t caused by service during conflict. The expanded law would also cover service-related illnesses for all veterans.

The current program hasn’t run smoothly. The VA initially estimated that 4,000 caregivers would qualify, but the program soon swelled to 25,000. Some VA facilities cut hundreds of families from the program, often with little notice, and other caregivers had their stipend reduced. Veterans are placed in one of three tiers, depending on how much support they need — 10, 25 or 40 hours per week. The stipends range from about $7,700 to $29,000 per year, and average $15,600.

Melissa Comeau’s husband, who was medically retired in 2013 after nearly 13 years in the Marine Corps, started in the highest level. The VA dropped him to the lowest level but moved him to the middle after Comeau appealed the decision. Comeau, who directs the Military Veteran and Caregiver Network, expected bureaucratic hassles, but the indignities of the evaluation process can be difficult for veterans, she says. During home visits every three months, VA staff interviewed Comeau and her husband and observed their daily routines. Could he go to the bathroom on his own? Take a shower? Get dressed and feed himself? “It’s pretty invasive,” she says. “It’s proving all the things he doesn’t want highlighted about himself.”

While the process is meant to refine care and prevent fraud, advocates like Comeau want the program tweaked before it’s rolled out to other veterans. “We don’t want to put them through the bureaucracy, paperwork and the constant reevaluations,” she says.