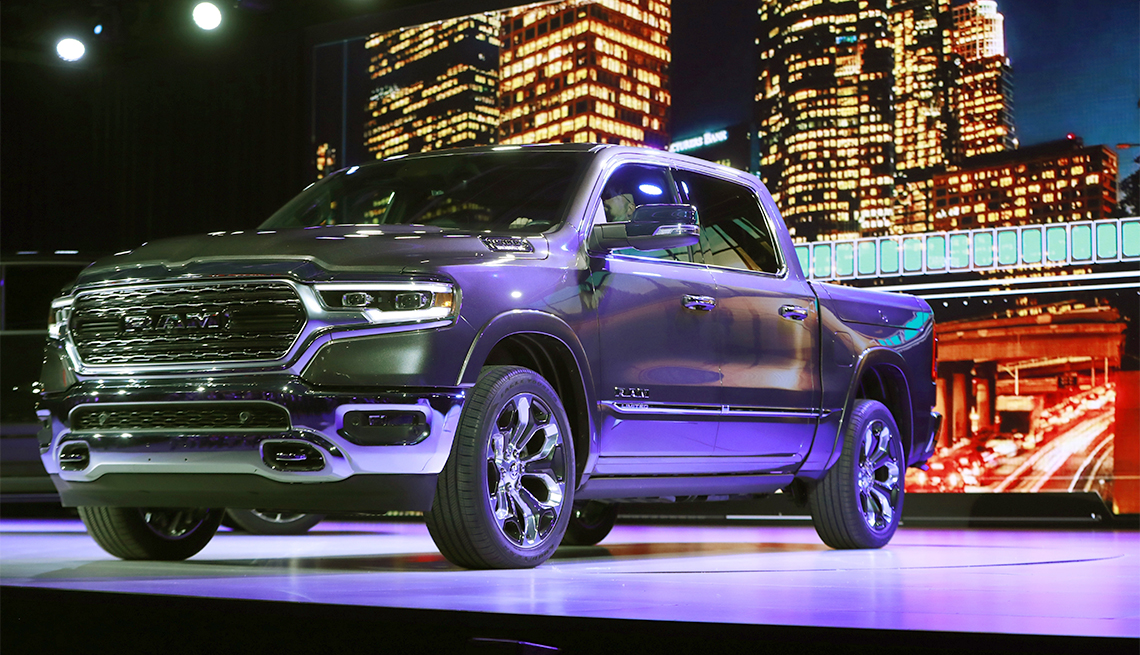 The Ram 1500 is one of the new trucks featured at the annual Detroit auto show, which is expected to draw 100,000 people each day.

En español | It almost doesn’t matter whether auto sales are going up or down — and they’re expected to drop a bit again in 2018 — automakers must keep promoting the product.

The annual Detroit auto show — North American International Auto Show, formally — is a huge showcase for doing just that, expected to draw about 100,000 people each day with exhibits of new cars, trucks, vans and utility vehicles.

This year’s event, at Cobo Center in downtown Detroit, opens to the public on Friday but it’s been making news already as the press has gathered to take a look; the headliners so far are trucks, SUVs and Ford’s new 2019 Mustang Bullitt.

“While 2018 will be another strong year, it will be a down year — so automakers are using the Detroit show to serve up more of the trucks and SUVs shoppers crave,” says Jessica Caldwell, executive director of industry analysis for auto researcher and parent of car-shopping site Edmunds.com.

As part of its auto-show introduction of a 2019 Mustang Bullitt edition, honoring the 1968 Steve McQueen film Bullitt, Ford featured not only the Mustang that McQueen drove in that iconic movie, but also McQueen’s granddaughter, Molly McQueen, to discuss the car and her grandad.

Ford Motor’s executive chairman Bill Ford also used the show to announce an investment of $11 billion in electric vehicles by 2020, up from $4.5 billion previously promised.

And Transportation Secretary Elaine Chao repeated that her department will continue to eliminate “unnecessary obstacles” to the development of self-driving cars, by avoiding restrictive regulations.

But mainly the show is about the models that pay the bills and this year it’s about the trucks. All these were billed as 2019 models.

Chevrolet Silverado: Hitting showrooms in the second half of this year, the remake of the full-size pickup boasts more space in passenger cabs and cargo beds, both; power-operated tailgates on some models, and easy to lift aluminum gates on all; storage boxes that fit over the wheel wells in the cargo bed. A 3-liter diesel engine will be available in the 2019s.

Ram 1500: The gee-whiz feature of this full-size pickup’s re-do is a big, 12-inch touch screen for the infotainment interface on some versions. The Ford F-150 screen is an 8-incher, for comparison.

Ram also gets what’s described as a mild hybrid system. It provides electric-motor help for extra oomph in start-stop use and it can provide a quick, short power boost. As in the Chevy Silverado, passenger space expands.

Ford Ranger: Caught out by the success of chief rival General Motors’ mid-size Chevy and GMC pickups, Ford is bringing back the Ranger — but not until the first quarter of 2019.

It’s based on a Ranger that Ford has sold in overseas markets since 2011. Despite its time already on the market, the U.S. remake uses the latest hardware and electronics — including Ford’s 10-speed automatic transmission — so “you’re not getting the last of anything,” says Ford spokesman Mike Levine.

Mercedes-Benz G-wagen: Big, squared-off and expensive, the six-figure SUV should hit dealerships late this year. The interior is where the notable changes live — more premium than before, to match the M-B car lines and the expectations of high-dollar buyers. Actor Arnold Schwarzenegger, a G-wagen fan, appeared on stage at the G-wagen introduction to promote the rig, to gift Dieter Zetsche, head of M-B cars, with a cowboy hat, and to get Zetsche to acknowledge there’ll eventually be an electric G-wagen, somewhat similar to the custom-done version Schwarzenegger drives.