Driven a new car lately? Let's go for a ride. Backing out, the car beeps to warn a pedestrian walking by. A dashboard light illuminates if the vehicle ahead is too close. A side mirror light flashes, signaling a truck behind you in the blind spot — not a good moment to pass. And if the car senses you're drowsy or driving erratically, a chime sounds an alert.

See also: How to build a better car for boomers. 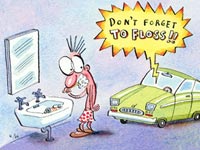 New technology in smart cars is sometimes dangerous and distracting for older drivers.

Resembling computers on wheels, many of the latest vehicles are loaded with sensors, lasers, cameras and crash warning systems that alert drivers to blind spots and impending collisions — or when they're drifting too far out of their lane. If the driver fails to respond, some models assume control and apply the brakes. Other options assist with the pesky chore of parallel parking or maintain a safe distance between vehicles.

The aim of all the bells and whistles is, of course, safety. Such gee-whiz technology could protect older drivers, whose most common accident is failure to yield in an intersection, according to the Insurance Institute for Highway Safety (IIHS). Reaction time slows and vision changes with age. Drivers over age 70 may misjudge the speed of an oncoming car, and those age 80 and older may fail to see the other vehicle at all. So these warning devices could indeed save lives.

But how much is too much? Could older drivers, whose adaptation to new technology may take a little longer, be more at risk from the very safety features meant to protect them? The federal government, the auto industry and the research community are debating the potential for driver distraction from too many chimes, beeps, computerized voices, vibrating steering wheels and lights flashing on dashboards, windshields or side mirrors.

"If a three-inch light on your dashboard illuminates because you're too close to the car in front, you may look down at the dashboard first," says Bryan Reimer, a research scientist who studies human-machine interface at the Massachusetts Institute of Technology (MIT) AgeLab.

Dick Myrick understands how easily attention can waver. As a participant in a mid-2009 MIT study on driver distraction, he drove an SUV on major interstate highways while wired to an EKG machine that monitored his heart rate. In an exercise designed to mimic distraction, he was asked to recall numbers in a sequence, then punch them into a keypad or say them aloud. "It was distracting and very stressful," says Myrick, 62, a retired engineer from Arlington, Mass. "My heart rate went up."

Auto manufacturers are grappling with how to make high-tech gadgetry more user-friendly. Recent consumer complaints about Ford's on-board computer system, MyFord Touch, led to a downgrading of the automaker by Consumer Reports and J.D. Powers & Associates. Ford is now addressing issues with the system that has two five-way switch pads on the steering wheel and multiple screen displays.

Lack of standardization in today's sophisticated technology also ramps up the potential for distraction, says Reimer. "Every manufacturer's system is different — and nobody gets any training before they get behind the wheel."

Through trial and error (and studying the manual) Halle Schliesmann finally mastered the voice-activated navigation, temperature controls and hands-free phone link in her month-old Honda Pilot SUV. "I press a button on the steering wheel and say, 'Cabin temperature 68 degrees' or, 'Call home,' " says Schliesmann, 49, a Phoenix kindergarten teacher. "The learning curve was steep, but now I love it."

Some critics say that, more than computers on wheels, vehicles are turning into smartphones on wheels, loaded with infotainment systems that keep occupants connected to their social networks (and attract younger, tech-savvy buyers). Bluetooth technology allows electronic devices to communicate wirelessly, meaning that you can command your car to check for sport scores and movie listings, get a weather report or play Lady Gaga.

Officials at the U.S. Department of Transportation have chastised automakers for designing cars that enable radios, cellphones, navigation systems and other devices to run smoothly in the car. "We feel very strongly that just because you can do something in a vehicle — like typing on a keypad while the car is in motion — should you do it while driving?" says David Strickland, National Highway Transportation Safety Administration administrator.

Any activity — applying mascara, reading a map or talking on a cellphone — is distracting, says Amy N. Ship, M.D., assistant professor at Harvard Medical School. There is evidence, she says, that using a cellphone may be as risky as driving drunk. Ship routinely asks her patients if they use a cellphone while driving — even hands-free systems. "If the patient doesn't seem to understand the risk, I might ask, 'How would you feel if your surgeon were operating on you while he's talking on a hands-free phone?' "

Next: Cars that use wireless technology to talk to each other. >>

The automobile industry is pouring out new technologies, many borrowed from the military and the aeronautical industry, faster than researchers can evaluate them, says Anne T. McCartt, senior researcher for IIHS. "It's still a question mark what features really work," she says. "The best features are invisible — you don't even know they are there — like side air bags, adaptive cruise control and electronic stability control, which prevents the car from rolling over on a steep curve or icy road."

Contact the Association for Driver Rehabiliation Specialists at aded.net or cal 866-672-9466 toll-free.

For a CarFit checklist of safety and comfort tips, visit aarp.org/carfit

And just over the horizon, experts say, are cars equipped with medical monitoring devices to check the driver's heart rate, blood pressure and blood sugar. Even more promising are cars that use wireless communication to "talk" to each other and to roadside signals to prevent collisions. In fact, several major auto manufacturers are cooperating on developing such a "connected car."

"The connected car is the next major step in the evolution of car safety, on a par with seat belts, air bags and electronic stability control," says Scott Belcher, CEO of the Intelligent Transportation Society of America. Vehicles will detect traffic jams, slippery conditions or accidents far down the road, allowing the driver to take corrective action. If the driver fails to respond, the car will brake and prevent a crash, similar to the way airplanes avoid midair collisions. The driver of a connected car, unlike the operator of the self-driving Google robotic car now being tested, retains some control behind the wheel. By 2013, the U.S. Department of Transportation expects to make a decision on whether to mandate connected-car technology in future models. The DOT estimates that a fleet of connected cars could help drivers avoid 80 percent of potential crashes. NHTSA's Strickland says, "That's a great safety opportunity that has real promise."

For now, though, available advanced safety features are often standard in $50,000-and-up luxury cars or as an add-on to a standard model, says MIT's Reimer. "Since the mid-1980s, auto manufacturers have made monumental strides protecting occupants in a crash by designing cars to absorb the impact," he says. "Now the industry is making incredible strides in preventing crashes in the first place."

Elizabeth Pope contributes to the Bulletin from Portland, Maine.