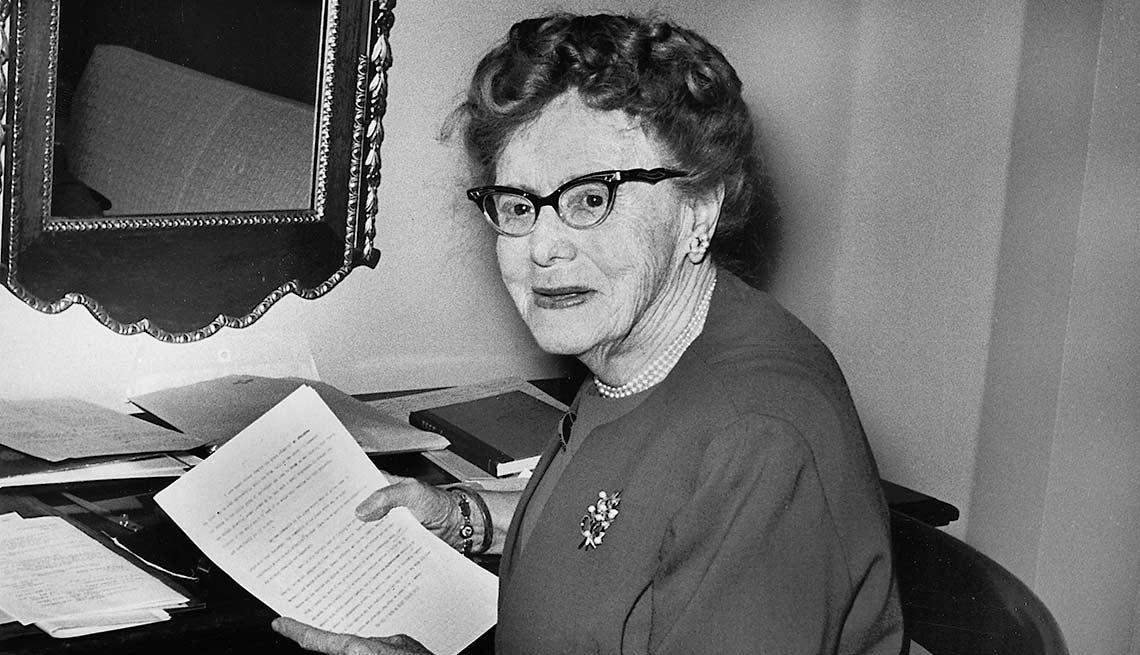 Dr. Ethel Percy Andrus prepares an address for the NRTA-AARP Conference, in Richmond, Va., 1965. Dr. Andrus founded the National Retired Teacher's Association in 1947 to address the economic challenges and health insurance needs of educators in retirement. In 1958, Dr. Andrus reached out to a broader audience by founding AARP (then known as the American Association of Retired Persons). The two organizations merged in 1982.

Ethel Percy Andrus founded NRTA: AARP’s Educator Community (then known as the National Retired Teachers Association) in 1947 to address the economic challenges and health insurance needs of educators in retirement. The benefits she was able to provide to retired teachers became so popular and important that non-educators sought them, as well.

After retiring from her position as a Los Angeles high school principal in 1944, the award-winning educator began a second career that ultimately had a far bigger impact on society. She became an activist and organizer on behalf of other retirees and older Americans, fighting to improve their financial security, their health care and other needed services.

In 1958, Dr. Andrus reached out to a broader audience by founding AARP (then known as the American Association of Retired Persons). NRTA and AARP shared many goals and collaborated in the development of countless programs and advocacy initiatives.

In 1982, the two associations merged at the national level, and NRTA became a division of AARP. The merger was designed to continue the beneficial relationship NRTA: AARP’s Educator Community and AARP enjoyed for nearly a quarter century.

The 50th anniversary of NRTA was celebrated in 1997 with events nationwide and at the state and local levels — culminating in a national convocation where NRTA and AARP state presidents, the Board of Directors and other leaders celebrated their shared history and vision. NRTA and its network of Retired Educators Associations (REAs) helped AARP celebrate its 50th anniversary by honoring an outstanding high school in each state with a $10,000 grant to support multigenerational and civic engagement activities.

Today, NRTA is known for its strong collaborative working relationship with a network of state- and local-based REAs that collectively represents over 1 million retired educators and school personnel. NRTA’s network now includes 51 affiliated state and city associations, more than 2,400 local associations and a national office in Washington, D.C.

In the tradition started by our founder, Dr. Andrus, NRTA continues its quest to engage all those committed to education and learning. We create real possibilities to support America’s working and retired educators by protecting their financial security and fostering collaboration and volunteerism.