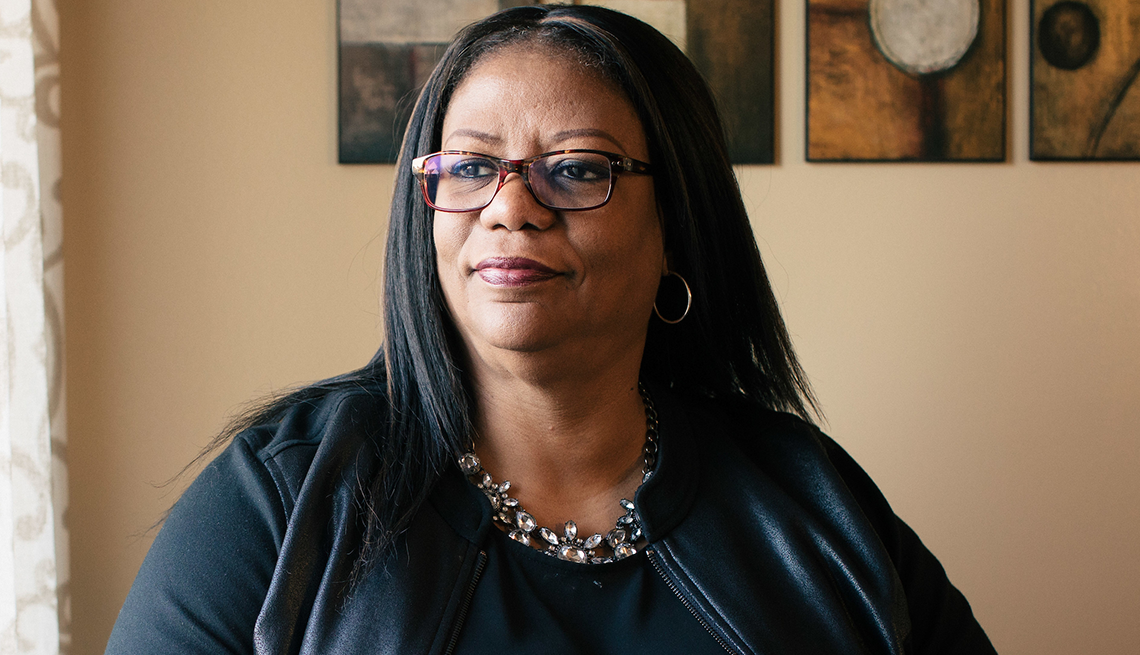 Call 855-220-9371 today to order AARP Foundation's free job search guide and find out if there's a Smart Strategies for 50+ Jobseekers workshop near you.

When Lisa Edmond was just shy of 18 years old, she started working at Sears, Roebuck & Co., in the still-under-construction Sears Tower in Chicago. It was 1974, and she was fresh out of high school; bright-eyed, loyal and ready to work. In 2016, more than four decades after she joined the company, Sears laid her off. At 60 years old, Lisa Edmond was looking for work.

Edmond had always been happy in her job, even after Kmart bought out the company and started laying people off. Starting in 2005, there were layoffs once a year, but she never felt like she was at risk. Her turn eventually came, though, and she had to leave the company to which she’d devoted her entire adult life. “It took me a couple of weeks to stop waking up crying,” she says. “I never expected to be unemployed. I wasn’t prepared.”

Sears paid for Edmond and other laid-off employees to take an eight-week course on getting back into the job market. She felt overwhelmed; she didn’t even have a résumé, since she’d never needed one. After a few weeks of grieving, she picked herself up and went to an orientation at Arlington Heights American Job Center where she was paired with a career services adviser. When she opened up about how disheartened and hopeless she felt, the adviser told her about AARP Foundation’s BACK TO WORK 50+ program and helped her sign up for a 7 Smart Strategies for 50+ Jobseekers workshop. After the workshop, Edmond knew immediately that she wanted to forge ahead and participate in the program.

When asked to describe the experience, she jumps right in. “It’s AWESOME —that’s all I can say.” There were only seven people in her group, which she found out later was lucky, since other groups could be much larger. The small size made for a highly personalized experience through which members could really get to know and support each other. They learned to create their own “elevator speeches,” one-minute statements to sell themselves and their job searches, and practiced them in the group. Edmond says she would have been intimidated to do that in front of a large group, but she found confidence in their shared experience. “We all had similar stories, looking for work at an older age. We learned a lot about each other and ourselves.”

Most of the material covered in the workshop was new to her — except for the technology part. “My work at Sears kept me up to date on technology,” she says. “I was training the young employees on the tech stuff. I may not have had a résumé, but I had a LinkedIn page!” What was new was how to prepare for a job search, and especially “how to figure out what you really want to do next.” She had worked her way up to assistant buyer at Sears, but she knew that wasn’t for her anymore. “It was way too many hours. I wanted to have a life. I have a family.”

She’d always been told she was good with people, so she decided to pursue customer service. She knew the pay would be less, both because of the job and because “you’re never going to get paid as much starting out as you did after working 40 years with the same company.” She had to adjust her salary expectations, but she knew the hours would be better and give her more time at home.

Multiple one-to-one résumé reviews and mock interview appointments prepared Edmond to tackle real interviews. But after a few weeks of rejections, she began to feel discouraged. “I started to get depressed. Some days I wanted to quit, but I didn’t stop — because of the AARP Foundation program. You have to keep going. All of us just kept on going.”

Her career services adviser let her know about an on-site recruiting event at Arlington Heights American Job Center.  Edmond did a mock interview and résumé review to prepare. Both her preparedness and her personality impressed a representative from Weber Packaging, and she was invited to interview for a customer service position the next day. She felt confident during the interview — and was hired on the spot. “That surprised me,” she says. “After so many interviews, I expected to have to wait a few days.”

Edmond couldn’t be happier with her new job. She loves the work, loves the hours, loves the environment and the way they take care of their employees. “In the beginning, they had to force me to take breaks. I’m the kind of person that eats at my desk — just put a bed in my office, I’ll never leave! They started noticing and made me get out for my breaks. Now I go for a walk during my break every day. They make me leave at 4:30, and 3:00 on Fridays!” After a few weeks, they told her she was ready to start answering phone questions. “I was a nervous wreck at first, but when you answer the phone, you get to learn a lot more about the business. If someone asks you a question, you have to go out and find the answer.”

Edmond recommends BACK TO WORK 50+ without hesitation to anyone who, like her, finds themselves looking for work at the age of 60. “You learn a lot about how looking for a job works these days. When I was coming up, the main thing companies wanted was loyalty. It’s different now; people change jobs more frequently, and that’s expected. There’s a lot to learn in order to be up to date, and BACK TO WORK 50+ teaches you that.”

Call 855-220-9731 today to order AARP Foundation’s free job search guide and find out if there’s a Smart Strategies for 50+ Jobseekers Workshop near you.

Decide on a target — specific employers, jobs, industries, or part-time work. Make a list of the things that interest you and match your skill set.